A Nation of Spy-Catchers: Fear of Saboteurs Has Ukrainians on Edge 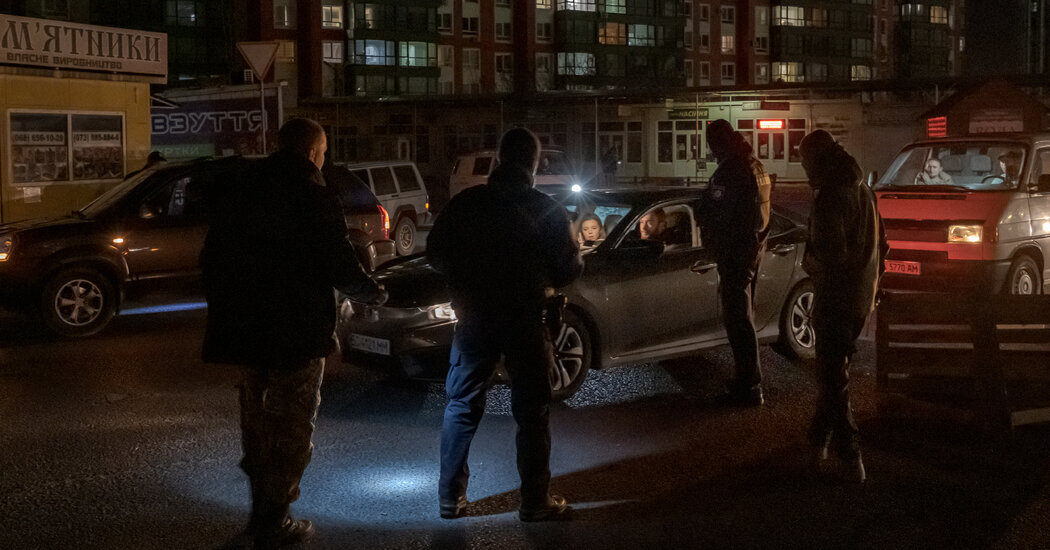 A Nation of Spy-Catchers: Fear of Saboteurs Has Ukrainians on Edge

LVIV, Ukraine — Two weeks after Valeriy, an actor and amateur photographer, settled in western Ukraine after fleeing his home in Kyiv, he was stopped and questioned by the local police.

Someone had reported him as he strolled around the city photographing its squares, churches and other landmarks — many now buttressed with sandbags.

The police officers took him to their car and scrolled through the recent photos on his mobile phone, leafed through his sketchbook, and checked what channels he subscribed to on the social messaging app Telegram.

“They were even reading my memes to check if I am making fun of us or them,” he said in an interview, meaning Ukrainians or Russians. Luckily for him, the officers found a meme of ragtag Russian soldiers with televisions for heads — an allusion to the intense propaganda Moscow is churning out — and let him go.

Valeriy, 32, who asked that his full name not be used for fear of recriminations, is not alone in having to look over his shoulder. With Russia’s full-scale invasion of Ukraine now into its second month, suspicion has settled like a fog over the country, joining anger and unity as the dominant emotions.

Ukrainians have been shaken by reports of “dyversanti” — saboteurs and diversionary groups working for Russia who mix into the civilian population, sow confusion and mistrust, and possibly even alert the enemy to potential targets. Civilians who were already living in fear are seeing spies everywhere.

“With this level of anxiety, and trying to find sources of danger, the more you imagine things when you don’t know what the beast looks like,” Valeriy said.

Suspicions run particularly high in Lviv, near the Polish border. Because it has been largely spared the destruction and horror of cities further east, it has become a magnet for Ukrainians seeking safety, as well as a transit point for those headed to Poland. As such, its population has grown temporarily by up to 400,000, local officials say.

That has put a lot of unfamiliar faces on Lviv’s streets, and raised the antennae of those who live there permanently.

In the first weeks of the war, the police and administrators fielded more than 17,000 calls a day about supposedly suspicious activity, Lviv’s regional governor, Maksym Kozytsky, said in an interview. Now law enforcement bodies are fielding about 10 percent of that volume, he said. But that’s still more than 1,000 a day.

Police officers and members of the Territorial Defense, a volunteer unit of the Ukrainian army, patrol the streets of Lviv and check cars at roundabouts. Men serve at checkpoints on the entrance to every city or village nearby, reserving the right to check documents.

Lviv’s Neo-renaissance opera house functioned throughout the two world wars, its director said. But now, it is not staging operas publicly because of fears that saboteurs may attempt a provocation, its director, Vasyl Vovkun, said in an interview. Instead, the theater has focused on filming and publishing performances, like a recent short ballet about Ukraine’s plea to impose a no-fly zone over the country.

There are legitimate reasons for suspicion. During the first month of the war, Ukraine’s intelligence agency, the S.B.U., dismantled 20 saboteur groups and apprehended 350 more saboteurs, a spokesman, Artem Dekhtiarenko, said last week.

And Mr. Kozytsky wrote on his Telegram channel that on Saturday, a day when Russian missiles struck two industrial facilities in Lviv, the police had stopped a suspicious car and checked the phones of the two men inside. He said they found videos and photos showing the movements of Ukrainian military. “They also had photos of the passports of men with Luhansk registration and many contacts with Russian numbers,” he said.

The assertions could not be independently verified.

Ukrainians of all stripes have tried to help the authorities in any way they can. Patriotic, militaristic music blares from the speakers of every restaurant and cafe. The Italian protest song “Bella Ciao” has been recast in Ukrainian with lyrics celebrating the donated American-made Javelin missiles and Turkish Bayraktar drones being used by the troops.

And ordinary civilians can join the fight by reporting suspicious activities. An app, eVorog, a wordplay that means “there is an enemy,” asks people to report any suspected military activity. It has received more than 200,000 submissions in a month, according to the Patrol Police, a subdivision of the police responsible for public order.

With the war at the forefront of everyone’s minds, people are nervous, especially newcomers. Anton Ivanov, a 36-year-old IT specialist from Kyiv who settled in his uncle’s Lviv apartment, was visited by the police and the Territorial Defense. Surprised that anyone would show up at his door, he asked the men knocking who they were.

The armed, uniformed men were asking the same question.

“They demanded our IDs, wanted to see who we are, where we are going, and why we are staying here,” Mr. Ivanov said. “They asked if we were hiding someone.”

It turned out that the neighbors in their leafy residential neighborhood had become suspicious about a car with license plates not from Lviv, and someone phoned the police. Once the documents had been checked, they moved on.

In another cobblestone neighborhood, Natalia Kovtun, 71, has been refusing to open the basement bomb shelter in her apartment building out of fear that a nefarious actor could plant a bomb there.

“What if someone tries to break into here, and bring a bomb here?” she asked one of her neighbors. “Do you understand what will happen? We will all fly up, the entire house. We have really unprotected doors and it is easy to break the lock to come into our yard.”

In the nearby Ternopil region, two groups of men grew so suspicious that they reported each other to the police.

Putin’s advisers. U.S. intelligence suggests that President Vladimir V. Putin has been misinformed by his advisers about the Russian military’s struggles in Ukraine. The intelligence shows what appears to be growing tension between Mr. Putin and the Ministry of Defense, U.S. officials said.

“There was a conflict situation between unknown citizens who considered each other dyversanti,” the Ternopil police wrote on Facebook on March 18. One group followed and then reported several men who appeared suspicious to them; the other group also called the police to report that they were being chased and felt threatened by “an unknown aggressive man.”

“We warn citizens: Do not try to detain unknown persons on their own, or threaten them with weapons or physical confrontation,” the regional police wrote.

The perception is that while Russian forces cannot send their armies to surround Lviv, the enemies — individuals and small groups who can blend in with the other hundreds of thousands of outsiders — are already within.

A law enforcement official, who declined to be identified because of the tense atmosphere in the city, pointed out that Ukraine and Russia have been fighting for eight years in the East. He shared stories of recent apprehensions of saboteurs posing as humanitarian workers. “Of course they have had time to carefully prepare,” he said.

A 10 p.m. curfew is in effect, though the streets are mostly empty by nightfall. Mysterious messages get passed around warning that the Russians plan to target representatives of western embassies or aid agencies that have moved from Kyiv.

Previous attacks in the West were also supported by local assets.

An amateur aviator from Lutsk, northeast of Lviv, where the military airport was hit twice, had been providing information to Russian security services since at least 2017, the S.B.U. found after detaining the man earlier this month. They accused him of communicating with the Russians about the activities of the military during the first week of the war.

“People are enraged,” the mayor of Lutsk, Ihor Polishchuk, said in a recent interview. “The person who was detained had posed as a civic activist.” he said, adding that the man’s arrest had “increased the level of suspicion of possible spies.”

The S.B.U. reported similar instances of assistance in attacks on the military airports in the cities of Ivano-Frankivsk and Vinnytsia.

The trepidation in Lviv has only grown since the missile strikes on the city on Saturday.

Lviv’s regional administration and Ukraine’s intelligence agency have resisted providing full details about targets, and have lashed out at journalists for showing images of the aftermath of the strikes, saying these give the Russian forces information that helps them decide whether or not to launch more projectiles.

Valeriy, the actor and photographer, said that his encounter with the police was an invasion of privacy he would not have tolerated in peacetime, but that it was conducted in an “appropriate manner” and for a good cause.

“There is a fine line between paranoia and vigilance,” he said.

“At the end of the day, if it’s the former, it’s just inconvenient for an innocent person. If not — then someone dies.”