A Sleepy Baltic Rail Line Gets a Geopolitical Wakeup Call 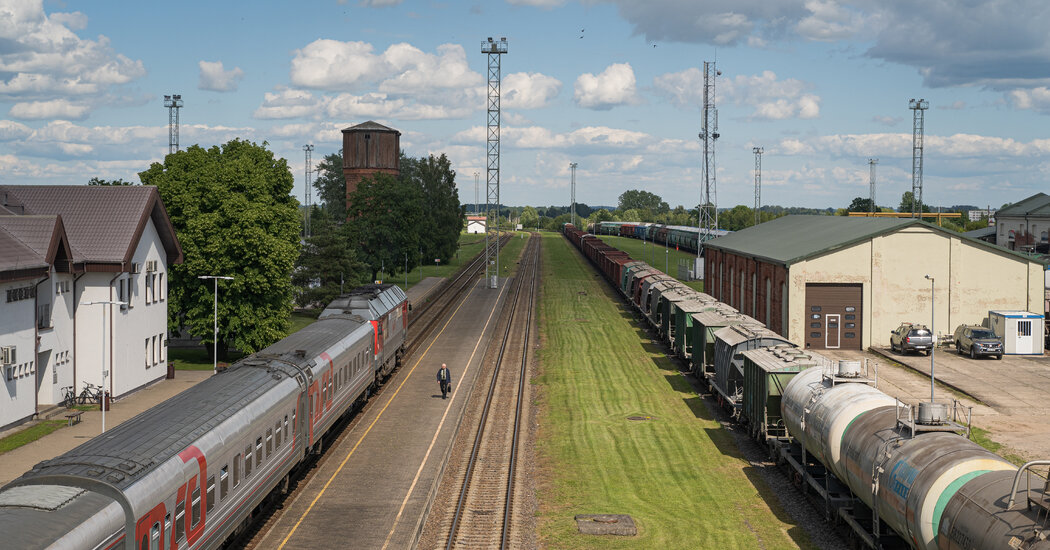 A Sleepy Baltic Rail Line Gets a Geopolitical Wakeup Call

KYBARTAI, Lithuania — As war rages in Ukraine, fueling ever-growing tensions between NATO and Russia, a sleepy Baltic railway station with no passengers and few trains this week found itself at the center of a perilous new confrontation between East and West.

The station stands on the border between Lithuania, a NATO member and strong supporter of Ukraine, and Kaliningrad, a Russian exclave on the Baltic Sea stuffed with nuclear-capable missiles but physically disconnected from the rest of Russia.

From the Lithuanian town of Kybartai, decked with Ukrainian flags, the railway tracks extend west into Kaliningrad, bringing goods into the region, but also tracing a potentially volatile strategic fault line on the edges of Europe.

This week, long dormant tensions over Kaliningrad erupted, further fraying Russia’s relations with the West, after unfounded claims by Moscow that Europe was choking off train and trucking routes bringing vital supplies to Kaliningrad — and would, as a result, face retaliation.

“Russia will certainly respond to such hostile action,” Nikolai P. Patrushev, the head of the Kremlin’s Security Council and one of President Vladimir V. Putin’s closest advisers, warned Tuesday during a visit to Kaliningrad. He said that Russia would take measures “in the near future” that “will have a serious negative impact on the population of Lithuania.”

The threat set off a frantic scramble by Washington and in European capitals to head off something they have sought to avoid since Mr. Putin invaded Ukraine four months ago: a direct confrontation between Russia and NATO.

On Wednesday, Lithuanian ministers and legislators gathered in a secure underground conference room to game out possible Russian responses and discuss how the dry minutia of European sanctions had set off a rush of unintended and possibly dangerous consequences.

“Nobody wanted or expected any of this,” said Laurynas Kasciunas, chairman of Lithuania’s defense and security committee, who led the meeting. “We all know how sensitive Kaliningrad is for the Russians.”

Marius Emuzis, an expert on Soviet-era history at Vilnius University, said Kaliningrad had always been a “complicated and volatile place,” part of the region known until 1945 as East Prussia, the heartland of German militarism.

Conquered by the Red Army at the end of World War II, the region was emptied of Germans and subjected to what Mr. Emuzis described as “military anarchy,” featuring looting, rape and random violence by Soviet soldiers. The first Communist Party leader in the region, sent from Moscow by Stalin to restore some order, despaired and shot himself in 1947

The chaos later receded but Kaliningrad, wedged between Poland and Lithuania, both now NATO members, never lost its sense as an insecure place apart from the rest of Russia and surrounded by potential foes.

That was before the Ukraine war, which has perhaps strengthened Russia’s desire to lash out at the West but severely diminished its capacity to do so without resorting to nuclear weapons.

Peter Nielsen, a Danish colonel commanding a NATO unit in Vilnius, the Lithuanian capital, said that he had seen no signs in recent days that Russia is preparing any new military action against Lithuania. “I didn’t sleep well in the month up to the Ukraine invasion; now I sleep very well,” he said in an interview. “Touch wood.”

What Russia might ultimately do, he added, will depend on the mind of Mr. Putin, and “we can’t look into that.” But the Russian president’s capacity to act, short of initiating a nuclear war, is severely limited, he said. “We are tracking what they do, not what they say,” he said.

Around half of the Russian troops and hardware that was previously based in Kaliningrad, for example, has now been redeployed to Ukraine. The United States, in contrast, has boosted NATO forces in Lithuania, with around 700 American soldiers now on rotation in the country to supplement a regular contingent of 1,150 German, 250 Dutch and 200 Norwegian troops.

This, said Col. Nielsen, makes a Russian military strike against Lithuania highly unlikely — “even if they are crazy.”

More likely, according to officials in Vilnius, is Russian meddling with shipping lanes near Lithuania’s main Baltic port, Klaipeda, with military exercises or the disruption of an electricity network linking Russia, Belarus, Lithuania, Latvia and Estonia.

But doing the latter, said Dainius Kreivys, Lithuania’s energy minister, would mean cutting off electricity to all the Baltic states, an escalation Moscow probably does not want. And, he added, Lithuania has built connections with Poland, Finland and Sweden that allow it to link up easily to the European grid and avoid power cuts.

While government officials have played down the Russian threats, nerves are on edge. To help calm these jitters, the United States on Wednesday vowed “ironclad” support in the event of military or other retaliatory action by Russia.

The first anyone knew there was a problem was on June 17, when the governor of Kaliningrad, Anton Alikhanov, posted a video message on his Telegram channel saying he had received the “unpleasant news” that Lithuania was banning cargo traffic between mainland Russia and his region because of European sanctions.

He said the ban — which Lithuania insists does not exist — covered around half the items Kaliningrad imports and constituted a “crude violation” of the European Union’s commitment to allow the unimpeded flow of goods between the two disconnected parts of Russia.

Lithuania says the share of goods to Kaliningrad so far affected by European restrictions amounts to just one percent of the total traffic, because many E.U. sanctions against that traffic haven’t yet come into force.

“The Russians want to create hysteria,” said Mr. Kasciunas, the defense and security committee chairman. He suggested it was part of an effort to drive a wedge between E.U. countries that have been unusually united on sanctions, and force the bloc to introduce exemptions that risk unraveling a policy of punishing Russia for its invasion.

An internal report by Lithuania’ state railway shows that rail cargo between mainland Russia and Kaliningrad fell sharply even before sanctions went into effect, from 616,000 tonnes in March to 298,000 tonnes in May. Fifty-four percent of this cargo involved goods targeted by European sanctions but not yet prohibited under a staged program of implementation. Sanctions already announced on vodka, for example, do not take effect until July 10.

In a video message Wednesday, Prime Minister Ingrida Simonyte of Lithuania dismissed Russian claims of a blockade as a “lie,” noting that passengers could still travel freely by train and freight traffic had been only marginally disrupted.

Ms. Simonyte insisted that Lithuania was simply “complying with sanctions imposed by the European Union on Russia for its aggression and war against Ukraine.”

Unsure over whether sanctioned Russian goods were banned only from sale in Europe or also from transit through E.U. territory, Lithuania this year asked the bloc’s executive arm, the European Commission, for clarification and was told in April that “transit between Kaliningrad and mainland Russia via EU Member States of items falling within the scope of the measures is also prohibited.”

It was advised to carry out “proportionate” checks but what that meant was left unclear.

Hoping for some clarity, Lithuania this week asked the European Commission to rule on how and when exactly sanctions on Russians goods should apply to their transportation to Kaliningrad. Officials said they expected a decision in coming days.

Worried that its westernmost territory might be cut off from the rest of the country following the collapse of the Soviet Union and Lithuania’s emergence as an independent state, Moscow negotiated for years with post-Soviet leaders in Vilnius to secure guarantees of safe and uninterrupted passage for its trains.

Gediminas Kirkilas, a former Lithuanian prime minister who took part in negotiations in 2002 and 2003, said the deal related to passenger traffic, not freight, reflecting the fact that nobody imagined at the time that Russia would fall under sanctions restricting transport of its goods.

The two countries agreed that Russian trains, sealed to prevent passengers jumping off and entering Lithuania without visas, could pass between the disconnected parts of Russia without hindrance.

At a near empty Kybartai station this week, the sealed train from Kaliningrad to Moscow opened its doors briefly to let Lithuanian customs inspectors and border guards on board to count the passengers. There were only 191 — a sharp drop from the 700 who used to make the trip during the summer season before the war in Ukraine.

Saulius Baikstys, the director of the station, said he was “of course worried” about rising tensions — not because he fears a Russian attack but “because we are worried about losing our jobs” if trains stop traveling to and from Kaliningrad.