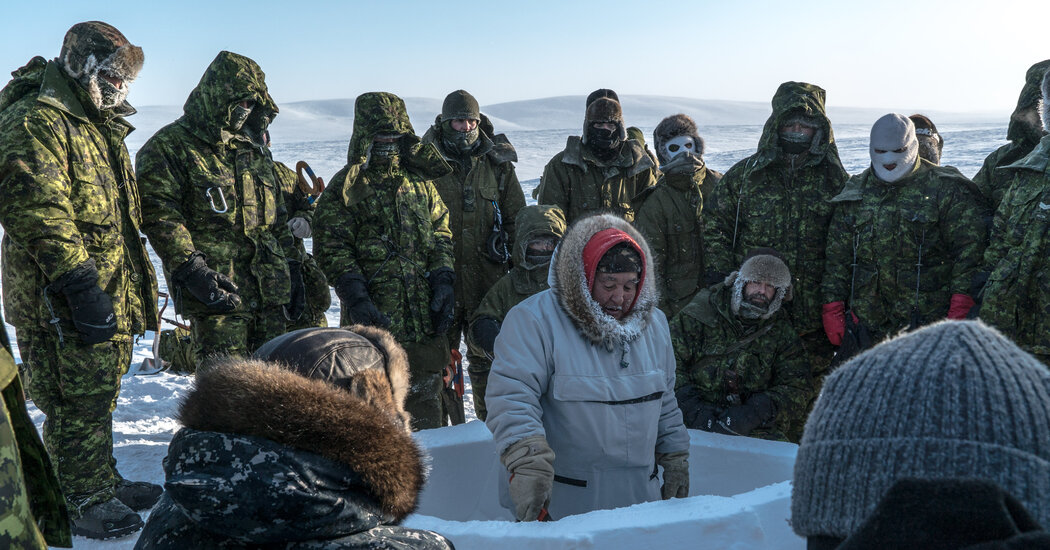 For the better part of next week, residents in Canada’s Northwest Territories may see a greater military presence and aircraft whirring about.

It’s part of a routine training exercise by NORAD, the North American Aerospace Defense Command, a partnership between Canadian and American military forces for monitoring and alerting against aerial and marine attack.

Any other time, the routine training would not be a cause for concern. But Russia’s war in Ukraine has drastically shifted the view that the Arctic is a “zone of peace,” a term coined by the former Soviet leader Mikhail S. Gorbachev in a speech he made two years before the end of the Cold War.

Premiers in the three northern territories co-signed a letter to Prime Minister Justin Trudeau on March 2, expressing their growing concern about Arctic defense and security in light of Russia’s war. The sense of alert in Canada’s North has been heightened, so much so that Premier Caroline Cochrane, of the Northwest Territories, posted on Twitter to “assure residents” that the NORAD training exercise was not connected to the conflict in Ukraine.

“Interest in the Arctic has been increasing due to climate change and the opening of Arctic waters, and it’s paramount Northerners are involved in decisions that impact the North,” Ms. Cochrane said in an emailed statement.

Compared to its neighbors, Russia has the longest Arctic coastline and has viewed the thawing Arctic ice as an opportunity to advance its ambitions on energy security by developing northern energy sources and help its bottom line by developing shorter trade routes that would save costs on shipping cargo to the West.

At the same time, the country has undergone a steady Arctic military expansion that, in the context of war in Ukraine, has made diplomacy efforts paramount.

But as I reported this week, a key forum for Arctic policy collaboration dissolved last week with the suspension of activity in the Arctic Council, the leading diplomatic organization for the region, in response to what Canada’s foreign ministry has called an “unprovoked invasion” of Ukraine.

The Arctic Council, made up of eight nations, is one of at least four diplomatic organizations that have suspended their work or stopped collaboration with Russia in recent days.

Michael Byers, a professor in political science at the University of British Columbia who researches Arctic sovereignty, said that the Arctic is not monolithic and that countries in the European Arctic were more likely than Canada to be feeling a greater threat.

“The North American Arctic still has a lot of sea ice,” he said. “It also has very little infrastructure and a very sparse population, and it’s a long way from Russia,” he added. “If I were Norwegian, I’d be watching Russia very closely right now.”

On the ground. Russian forces, battered by the local resistance, have stepped up their bombardment across Ukraine, targeting locations far from the front lines. Satellite imagery of a convoy north of Kyiv suggests that Russia is repositioning its forces for a renewed assault there.

Iran nuclear deal. A European Union official said that talks on reviving the 2015 deal had paused following the invasion. Russia, a signatory to the accord, has tried to use final approval of the deal as leverage to soften sanctions imposed because of the war.

The Yukon premier, Sandy Silver, said that while there was not an immediate threat to Canada’s North, the landscape’s physical changes, given the political shifts and the melting of polar ice as a result of climate change, bore renewed focus from the federal government.

Canadians “are so used to taking a look at a North American-specific picture of the globe,” Mr. Silver told me, adding that in the Arctic region, people don’t do that. “Our maps have a center piece of the North Pole, and around that you have eight nations that are all taking a look at receding glacial growth.”

Vjosa Isai is a Canada news assistant at The New York Times. Follow her on Twitter at @lavjosa.

How are we doing?
We’re eager to have your thoughts about this newsletter and events in Canada in general. Please send them to nytcanada@nytimes.com.