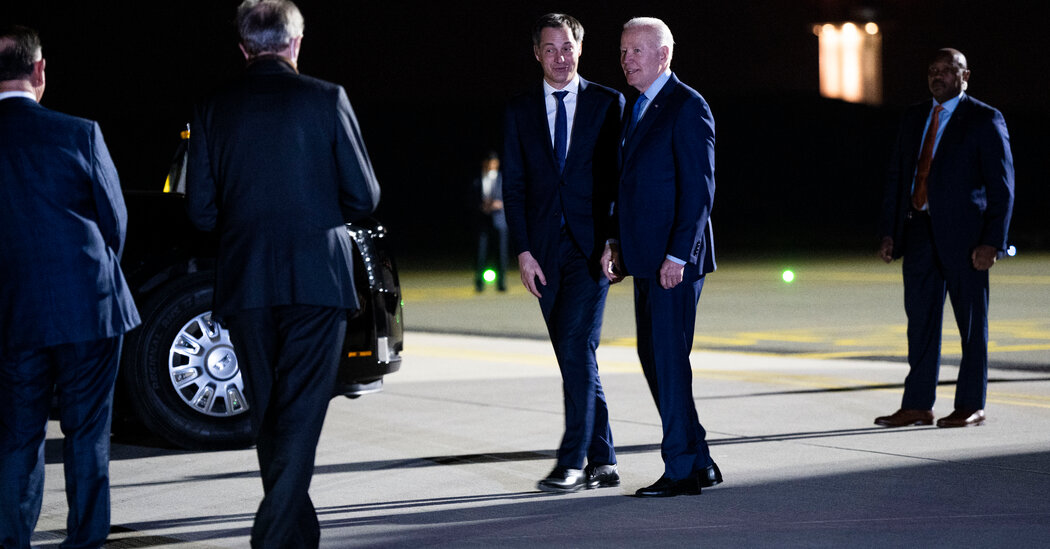 BRUSSELS — NATO announced a doubling of its military presence near Ukraine on Wednesday and said the alliance would help the country prepare for possible chemical, biological and even nuclear threats from the Russian invaders, which would be a once-unthinkable expansion in the month-old war.

The announcement by Jens Stoltenberg, NATO’s secretary general, came hours before President Biden landed in Europe for an extraordinary strategy session with the alliance, created in 1949 to contain the Soviet Union. The warnings underscored the urgency of efforts to prevent the conflict from spreading beyond Ukraine’s borders and entangling NATO in a direct fight with Russia.

The possibility that Russia might resort to weapons of mass destruction also reflected the Russian military’s failure — even with the use of indiscriminate weapons aimed at terrorizing civilians — to achieve more than a stalemate so far in the face of an unexpectedly tenacious Ukrainian resistance.

Mr. Biden’s NATO meeting on Thursday will be followed by a session with counterparts from the Group of 7 industrialized powers, and then with the European Union. The last will include an appearance by President Volodymyr Zelensky of Ukraine, via video link from an embattled Kyiv. That discussion is expected to explore ways to further tighten the already-severe Western economic sanctions on Russia that are aimed at pressuring its president, Vladimir V. Putin, into halting the war.

Those punishments, which have crashed the ruble’s value and begun to cause severe shortages inside Russia, have erased decades of its financial integration with the world in the space of a few weeks. Russia’s decision to strictly control how the Ukraine conflict is reported domestically — it is a criminal offense to call the conflict a war or invasion — has further raised repression in the country.

Mr. Biden wants to steel the allies for the likelihood that the conflict lasts for months or years, requiring a long-term commitment to economic and military confrontation, administration officials say.

But the Europeans are unwilling to follow the United States in stopping purchases of Russian oil and gas, which are much more critical to their economies. Chancellor Olaf Scholz of Germany said such a halt would imperil “hundreds of thousands of jobs.”

So, in some ways, Mr. Biden’s back-to-back meetings also represent the most severe test of the trans-Atlantic alliance’s cohesion over the Ukraine crisis.

The alliance has so far proved remarkably unified in trying to turn Russia into a pariah and help Ukraine’s outgunned defense forces to frustrate the Russian military’s ground advances in the country.

And Russia may have incurred more losses than previously thought, according to a senior NATO military official who, speaking on the condition of anonymity on Wednesday, said that 7,000 to 15,000 Russian troops had been killed in Ukraine over the past month. The upper range is more than double the Pentagon’s figure of around 7,000.

New signs of strain within the Kremlin hierarchy surfaced Wednesday as well. Bloomberg reported that Russia’s climate envoy, Anatoly Chubais, had left the country, “citing his opposition” to the war. The Russian state news agency TASS said only that Mr. Chubais, a former deputy prime minister under Boris N. Yeltsin, the former Russian president in the 1990s, had stepped down.

If anything, Russia’s diplomatic isolation appeared to deepen on Wednesday. Poland expelled 45 Russian diplomats, accusing them of spying. At the United Nations, a General Assembly resolution condemning Russia for causing a humanitarian disaster appeared on its way to an approval, because it is a forum in which Moscow does not hold a veto.

And a humanitarian resolution proposed by Russia at the Security Council — where it can veto any resolution — made no mention of Russia’s military assaults in Ukraine, prompting criticism that verged on ridicule. The measure failed with only Russia and China voting in favor, and 13 abstentions. (A resolution needs nine yes votes and no vetoes.)

Despite Russia’s frustration in Ukraine so far, Mr. Putin has shown no sign of backing down in his campaign to subjugate the former Soviet republic with bombings and shellings that have leveled all or parts of some cities, displaced a quarter of the population and created the biggest refugee crisis in Europe since World War II.

Mr. Biden and other Western leaders have denounced Mr. Putin’s willingness to order such tactics, and Mr. Biden has gone so far as to call his Russian counterpart a war criminal — a description that outraged the Kremlin. On Wednesday, Secretary of State Antony J. Blinken, who was joining Mr. Biden in Europe, took his remarks one step further, announcing that the United States has formally concluded that Russian forces committed war crimes in Ukraine.

The practical implications of Mr. Blinken’s announcement were not immediately clear. But they appeared bound to further aggravate the American relationship with Russia, already at its most fragile stage since the Cold War.

More evidence of Russia’s willingness to target Ukrainian civilians came Wednesday with the first known use of Grad rocket launchers to strike Kyiv, the capital, which Russian forces have sought to encircle since the war’s early days. A hail of Grad rockets slammed into a residential area near the center of Kyiv, setting off a burst of explosions that caused extensive damage to homes.

Reflecting heightened concerns about Mr. Putin’s plans, Mr. Stoltenberg said NATO was doubling its battle groups to eight along its eastern frontier. He said the additional four combat-ready, battalion-size units, which typically have several hundred troops each, were deploying in Bulgaria, Hungary, Romania and Slovakia.

“All of this is the immediate response to the Russian invasion of Ukraine,” Mr. Stoltenberg said, adding that the forces would remain there “as long as necessary.”

He also warned that the use of chemical or biological weapons could directly impact NATO members neighboring Ukraine. “Chemical weapons will have devastating consequences for Ukraine, but they could also have severe consequences for neighboring countries because of the contamination or spread of chemical agents or biological agents,” Mr. Stoltenberg said.

And Mr. Stoltenberg said that NATO allies on Thursday would offer Ukraine help to mitigate such an attack. “Tomorrow, I expect allies will agree to provide additional support, including cybersecurity assistance, as well as equipment to help Ukraine protect against chemical, biological, and radiological and nuclear threats,” he said, declining to specify what that equipment might be.

In another sign that Western allies now consider the use of weapons of mass destruction by Russia a real possibility, European officials said that the bloc was, alongside the United States, Britain and Canada, working on a new package of sanctions that would take effect should Mr. Putin decide to use chemical or biological weapons in Ukraine.

The economic fallout from the war and the sanctions is more acute for Europeans than for Americans. Though Russia is not a major player in the world economy, it is a major exporter of oil, gas, coal, and essential metals that are used in everything from mobile phones to automobiles. Russia also is a leading exporter of wheat and corn.

The persistent uncertainty combined with worries about shortages have further jacked up prices that were already inflated by the coronavirus pandemic and supply-chain chokeholds.

The European Union, on average, gets 40 percent of its natural gas and a quarter of its oil from Russia. Some individual nations are much more dependent.

Germany, which has the largest economy in Europe, gets 55 percent of its natural gas, more than a third of its oil, and over half of its coal from Russia. Robert Habeck, the country’s economic and climate minister, has warned that an immediate halt to Russian energy supplies could cause “mass unemployment, poverty, people who can’t heat their homes, people who run out of petrol.”

Energy supplies were exempted from the European sanctions imposed on Russia so far at the insistence of European governments. In the meantime, the European Union has agreed to move aggressively to reduce imports of Russian natural gas by two-thirds by next winter and eliminate them by 2027.

Mr. Putin appeared to have further complicated Europe’s dependence on Russian energy by announcing on Wednesday that “unfriendly countries” like members of the European Union and Britain must pay for their gas with rubles — instead of dollars or euros. That requirement would help strengthen the ruble’s value — precisely the opposite of what the West intended.

“Russia’s demand was a gambit to force Europe into a Hobbesian choice between destroying the ruble’s value and continuing to receive Russian oil,” said Robert McNally, a former energy adviser to President George W. Bush.