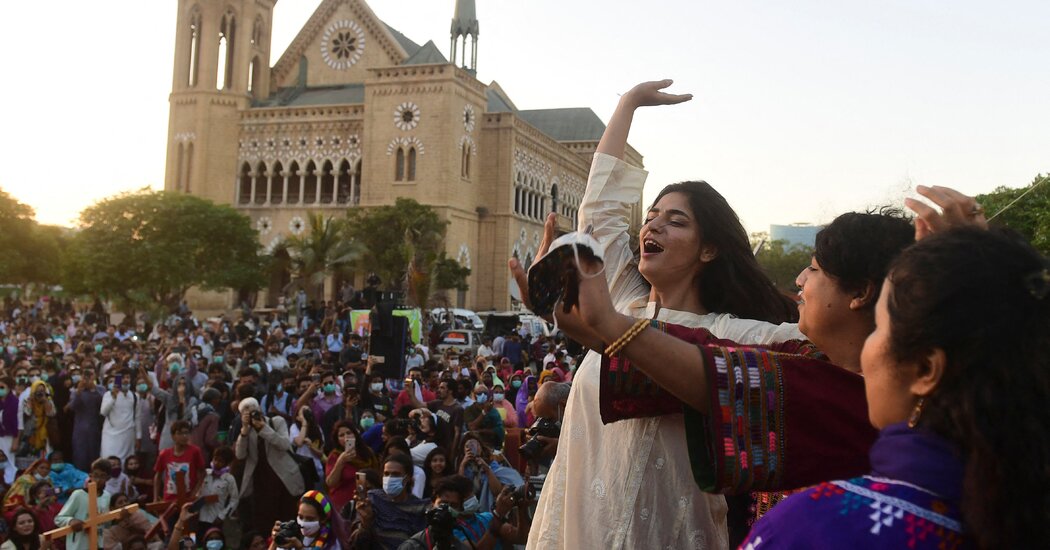 KARACHI, Pakistan — The reaction to Pakistan’s first women’s march was relatively mild: criticism and condemnation from Islamist parties and conservatives, who called the participants “anti-religion” and “vulgar.”

That did not deter the organizers of the 2018 march in Karachi, the significance of which reverberates to this day.

What started as a single demonstration to observe International Women’s Day has become an annual lightning rod for religious conservatives across Pakistan, who have been adopting harsher attitudes toward female activists. Now, as women prepare to march on Tuesday in Karachi and other cities, powerful figures in Pakistan want the event banned altogether.

Women planning to join the Aurat Marches, as they are called — Urdu for “women’s march” — have faced countless threats of murder and rape, along with accusations that they receive Western funding as part of a plot to promote obscenity in Pakistan.

“The growing uneasiness surrounding Aurat March every year shows that the campaign for women’s rights has been making an impact,” said Sheema Kermani, one of the march’s founders.

Last year, opposition peaked when Islamist groups demonstrated in major cities, accusing the marchers of using blasphemous slogans — a crime punishable by death in Pakistan, accusations of which have provoked lynchings and murders. The Pakistani Taliban have ominously warned the marchers to “fix their ways.”

The first Aurat March was organized by a small group of women in the port city of Karachi, who hoped to draw attention to the violence, inequality and other challenges faced by women across the country.

“We had held discussions and mobilized women in various communities, collected funds by small contributions from individuals, and wrote a manifesto to articulate demands related to women’s bodily rights to the government and Pakistani society,” Ms. Kermani said.

It worked. On March 8, 2018, the march drew thousands to the grassy grounds of Frere Hall, a majestic monument in Karachi dating from the British colonial era.

It also inspired women in other Pakistani cities, like Lahore and Islamabad. Since then, Aurat Marches have been held annually in major urban centers.

Analysts said the success of the first march made it a polarizing event in Pakistan, even as it advanced the possibilities of women’s activism in the Muslim-majority nation.

“Younger feminists who were inspired by a series of global women’s marches took their rage against violence, moral policing and lack of bodily or sexual choices for women and marginalized genders to the streets,” said Afiya Shehrbano Zia, the author of a book on feminism and Islam in Pakistan.

Girls brought placards proclaiming, “My body, my choice,” and performed an Urdu version of a Chilean protest song, “A Rapist in Your Path,” that assails rape culture and victim-shaming.

“There was nothing subtle about their slogans and banners from the first march,” Ms. Zia said, noting that the protesters had even highlighted L.G.B.T.Q. rights, a bold move in Pakistan.

As the event grew bigger over the years, marchers started raising even more sensitive issues, including abortion rights. Pakistan’s abortion rate is among the highest in the world; women who end their pregnancies often do so themselves, because many doctors refuse to perform the procedure on religious and cultural grounds.

Some Islamist parties responded to the marches’ growing popularity by organizing their own “modesty march.” In 2020, conservatives filed court petitions in an unsuccessful attempt to stop the Aurat Marches. That same year, a group of students and supporters of the Lal Masjid, the mosque at the center of a bloody 2007 clash between militant Islamists and the army, assaulted marchers in Islamabad.

After last year’s march, opponents doctored footage to make it appear that marchers had used blasphemous slogans, then circulated the faked videos on social media. A newspaper published a front-page story that referred to the marchers as prostitutes.

Pakistan’s minister for religious affairs, Noorul Haq Qadri, has spoken out against the Aurat March, claiming it violates the principles of Islam. He recently asked Prime Minister Imran Khan to declare March 8 to be International Hijab Day.

And some Islamist parties have threatened further violence. “The marchers spread obscenity in the name of women’s rights,” said Abdul Majeed Hazarvi, a leader of the Jamiat-e-Ulema Islam-Fazl party in Islamabad. “If the government allows the march, we will use a baton to stop it.”

Kiran Masih, 46, a Christian nurse with two daughters, has joined an Aurat March for the past two years, bringing a placard that reads, “Save our daughters.”

“As a minority, we feel increasingly insecure,” Mrs. Masih said. “At the workplace, we fear anyone can harm us on the false allegations of blasphemy, and at our homes, we fear that our daughters could be kidnapped and converted to Islam.”

Last year, at least 84 people were accused of breaking Pakistan’s blasphemy laws, and three people suspected of doing so were killed by mobs, according to the Center for Social Justice, a Lahore-based organization that campaigns for the rights of minority groups.

The Aurat marchers have claimed victories. They campaigned against the physically intrusive “virginity tests” often inflicted on women who bring accusations of rape, and a court in the northern city of Lahore banned them last year. The government has also passed a measure allowing the chemical castration of convicted rapists, another demand of the marchers.

But the increasingly aggressive opposition has left some march organizers fearing for their lives. Many have deactivated their social media accounts. Still, they are undaunted.

“We were and are scared, but we know that without putting ourselves in such a dangerous situation we cannot bring change,” Ms. Kermani said.