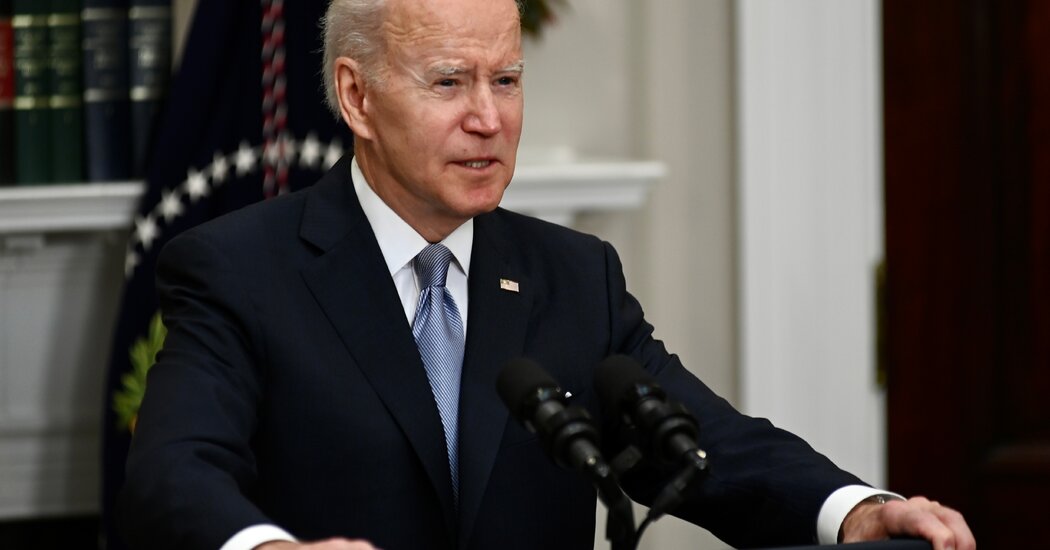 President Biden announced another $800 million in military aid to Ukraine on Thursday, saying it sent an “unmistakable message” to Russia’s president, Vladimir V. Putin: “He will never succeed in dominating and occupying all of Ukraine.”

The latest package brings the U.S. support to the Ukrainians to over $2 billion since the war’s start eight weeks ago. But as Ukraine’s demand increases for more sophisticated arms — everything from helicopters to more advanced antiaircraft systems — American officials are growing cagier about exactly what is being shipped. Mr. Biden made clear that the details of some of the weaponry were being kept secret, presumably because of escalating Russian threats to intercept and destroy it.

Modifying Theodore Roosevelt’s famous line, he said the United States would “speak softly and carry a large Javelin,” a reference to the antitank weapon that has been remarkably effective against Russian armor.

Mr. Biden made the announcement, appropriately, in the Roosevelt Room of the White House, and did his best to put his spin on Russia’s recent advances in the south and east, including its siege of Mariupol, the Ukrainian port that for nearly two months has suffered an unrelenting assault from Russian forces.

While reports from the ground suggest that the city is under Russian control except for a steel plant where some Ukrainian forces are still holding out, Mr. Biden said “there is no evidence yet” the city has completely fallen.

In fact, there is little hope that Ukrainian forces can hold on to any part of Mariupol, and defenders of the steel plant have acknowledged that they are essentially out of supplies to withstand a blockade. President Volodymyr Zelensky this week sought an exchange to ensure the safe passage for the civilians and troops trapped there.

Mr. Biden also announced an accelerated program to allow 100,000 Ukrainian refugees into the United States and $500 million in direct economic aid to the Ukrainian government, making official a pledge made several weeks ago.

While the White House has announced a series of packages to Ukraine, it is now running out of funds for more — unless Congress acts.

In his capacity as president, Mr. Biden can authorize the transfer of military equipment from U.S. stocks without congressional approval in response to an emergency, and Congress earlier this year approved $3 billion in new funding to explicitly encourage Mr. Biden to do so as part of a $13.6 billion proposal approved in March. The package also included funds to shore up sanction enforcement and humanitarian aid, in addition to the defense funds.

Senator Chuck Schumer of New York, the majority leader, said earlier this month that he planned to pursue a bipartisan international aid package, which would include both money for the global vaccination effort and additional funds for Ukraine.

Under continued siege. President Vladimir V. Putin of Russia called off an assault on a steel plant that has become Ukraine’s last foothold in the port city of Mariupol, ordering Russian forces to blockade it instead, as he tries to claim a victory in one of the war’s bloodiest locations.

Sending military aid to Ukraine. Ukraine’s allies are scrambling to deliver more advanced weapons for the battle in the east. President Biden said that the United States would send an additional $800 million in military aid to Ukraine including heavy artillery, dozens of long-range weapons, drones and ammunition.

The administration will have to outline a request in order to jump-start talks on Capitol Hill, and a spokesman for Speaker Nancy Pelosi said they expected to receive the request next week, when Congress returns from a two-week recess.

“The speaker hopes to bring the request to the floor as soon as possible with strong bipartisan support,” the spokesman, Drew Hammill, said.

Republican aides, who had pushed to increase the military funds in the initial package, said a stand-alone aid package for Ukraine would not meet resistance in their conference. But it is unclear how a broader package like the one outlined by Mr. Schumer would pass the Senate, given that Republicans have resisted the additional pandemic aid Democrats have sought.