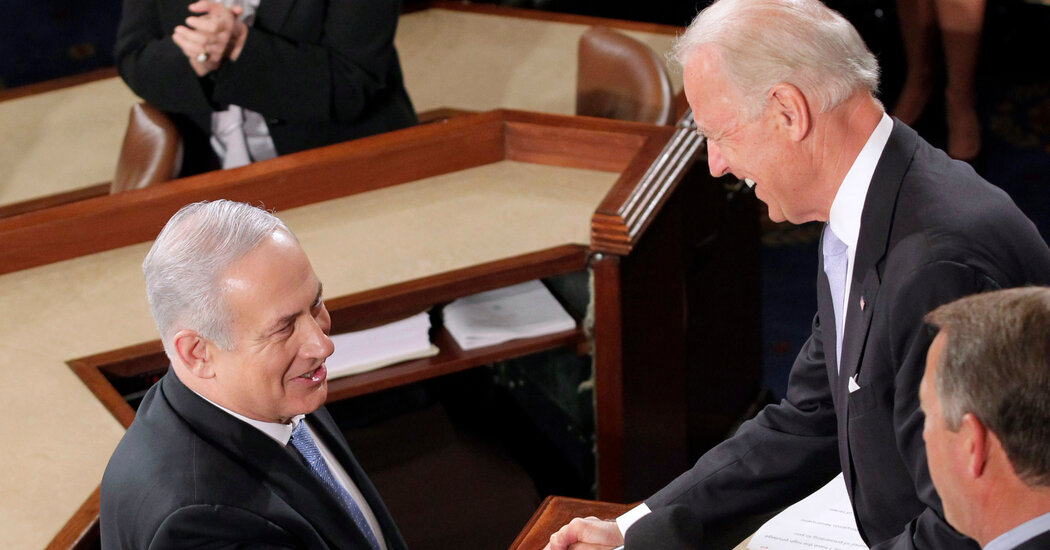 President Biden’s meeting on Thursday with Benjamin Netanyahu, the former Israeli prime minister, is the latest episode in an often fraught relationship that goes back four decades.

The two men first had regular contact in the 1980s, when Mr. Biden was a senator and Mr. Netanyahu was the deputy Israeli ambassador in Washington. Mr. Biden has since often spoken fondly of Mr. Netanyahu, despite their political differences, and once described giving him a photograph with a warm caption: “Bibi, I don’t agree with a damn thing you say, but I love you.”

After Mr. Netanyahu returned to Israel, becoming prime minister in 1996 and then losing the position three years later, he said that Mr. Biden was the only American politician to write him a letter after his election defeat. During moments of heightened friction between Mr. Netanyahu and President Barack Obama, Mr. Biden was often deployed to defuse tensions.

Relations between Mr. Biden and Mr. Netanyahu have nevertheless had their low points. Politically, the two men have different visions of the Israeli-Palestinian conflict. Mr. Biden supports the creation of Palestinian state as a resolution to the conflict, whereas Mr. Netanyahu has become increasingly open about his opposition to full Palestinian sovereignty.

In 2010, Mr. Netanyahu’s government embarrassed Mr. Biden while he was visiting Israel — announcing the construction of new settlement units in East Jerusalem, a move that obstructed the Obama administration’s attempts to restart peace talks.

In 2015, Mr. Biden declined to attend an address that Mr. Netanyahu delivered in Congress after the Israeli leader accepted an invitation from the House speaker, John A. Boehner, a Republican, without notifying the White House. The speech and Mr. Biden’s nonappearance exacerbated a dispute between Mr. Netanyahu and the Obama administration about how to deal with Iran’s nuclear program.

After Mr. Biden was elected president in 2020, Mr. Netanyahu took several hours to congratulate him — perhaps fearful, analysts said, of angering President Donald J. Trump, with whom he had developed strong ties.

Mr. Biden’s meeting with Mr. Netanyahu on Thursday is more than just a courtesy: Israel will hold a snap election in November — its fifth in less than four years — and it is possible that Mr. Netanyahu, who is leading in the polls, could soon return to power.

After Mr. Biden arrived in the country on Wednesday, he and Mr. Netanyahu greeted each other with an especially long and robust shake despite their past differences.

Their meeting occurs as Mr. Netanyahu is in the midst of two court cases. In one, he is facing corruption charges. In the other, he and his family are suing his predecessor, Ehud Olmert, accusing him of libel after he described the Netanyahus as “mentally ill.”