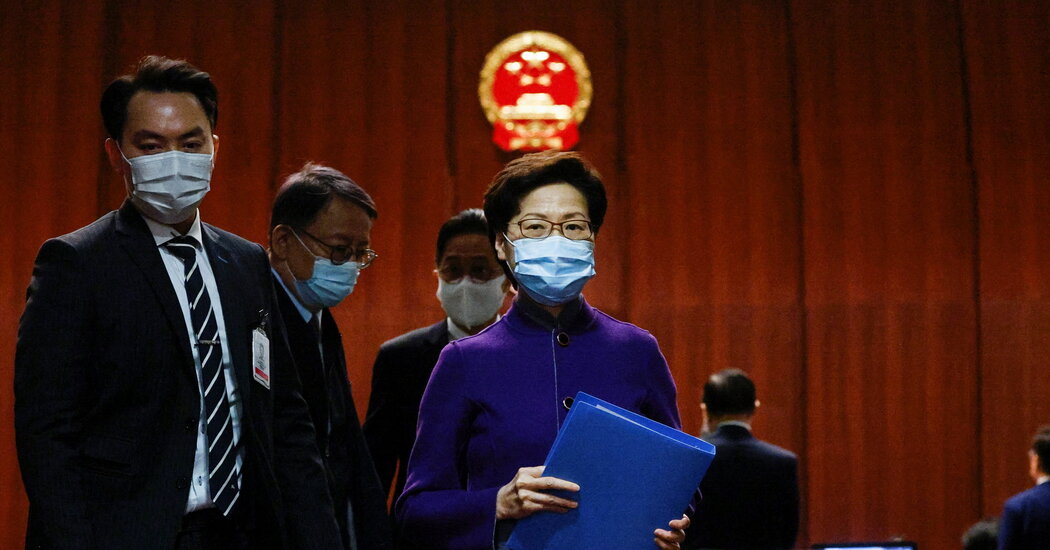 HONG KONG — Carrie Lam, the chief executive of Hong Kong, announced on Monday that she would not seek a second term, after a huge surge in coronavirus infections left the global financial hub with one of the highest virus death rates in the world.

“My family is my priority and they think it is time for me to go back home. That is my only consideration,” Mrs. Lam said, adding that she had already informed Beijing of her decision.

Mrs. Lam has been criticized by Hong Kong residents and pro-Beijing lawmakers for mixed messaging amid the city’s fifth outbreak, its biggest and most devastating since the beginning of the pandemic. Officials wavered on citywide mass testing, at one point indicating that the city might have to lock down residents, a prospect that triggered anxiety and panic buying.

As cases surged in February, Beijing stepped in, sending health workers, epidemiologists and technicians for testing. Hong Kong’s inability to get cases under control prompted warnings from China’s most senior leaders, including Xi Jinping. It also caused an exodus of the city’s expatriate community.

Mrs. Lam became chief executive in July 2017 after pledging her loyalty to Beijing and promising to foster a stronger sense of Chinese identity among young Hong Kong residents. But her five-year term was marked first by a deepening polarization of Hong Kong society, with broad demands among the young for more democracy and economic opportunities, and later by discontent over the way her government handled a coronavirus outbreak that ravaged the city’s world-class hospital system and further isolated Hong Kong from other countries.

A strong-willed chief executive, Mrs. Lam had previously become the target of huge street protests in 2019. Demonstrators demanded her resignation over an extradition bill that was met with strong opposition and protests that lasted months.

Mrs. Lam on Monday referred to these protests, as well as the coronavirus and “nonstop interference of foreign forces” during her time as leader of Hong Kong.

“I have faced unprecedented and enormous pressure,” she said.

Hong Kong’s chief executive is determined every five years in a vote closely managed by Beijing and determined by an election committee made up of 1,500 officials who back the Communist Party. The election was to take place on March 27, but was postponed until May 8 amid Hong Kong’s Omicron surge.

Mrs. Lam rose through the Hong Kong Civil Service, first under British rule and later under Beijing. She became known among her colleagues as a “good fighter” who defended policy stances and refused to back down from arguments. But over the past few months, as Hong Kong tried to hew to China’s zero-Covid policy, Mrs. Lam was criticized for sending mixed signals.

Marriages and divorces. Faced with a soaring divorce rate, China introduced a rule forcing married couples to undergo a 30-day “cooling off” period before formally parting ways. The move seems to have been effective at reducing divorces, but is unlikely to help with a demographic crisis fueled by a decline in marriages.

While facing increased criticism from the city’s business sector and expatriate community, Mrs. Lam doubled down on social distancing measures and an effort to make the city’s 7.4 million people test for the virus. Amid criticism from Beijing and local lawmakers, she later backed off from mass testing. Then, in late March, said the city would begin to lift a flight ban on nine countries and relax restrictions, after officials indicated the worst of the latest outbreak was likely over.

Hong Kong has reported nearly 1.2 million Covid-19 cases and 8,172 deaths, most of them tied to the most recent outbreak, and many of them among Hong Kong’s older and unvaccinated population. The city’s fatality rate from the virus was at one point among the highest in the world, at three per 100,000 residents, in large part because so many older Hong Kongers were not vaccinated.

Addressing rumors that Hong Kong’s number two official, John Lee, would be a favorite to replace her, Mrs. Lam said that she has yet to receive a resignation from any government officials.

She also said that she would focus on pandemic-related work until the end of her term on June 30. On Saturday, government officials issued a statement exempting candidates for chief executive from some social distancing bans while campaigning. Currently, no more than two households are allowed to gather indoors.