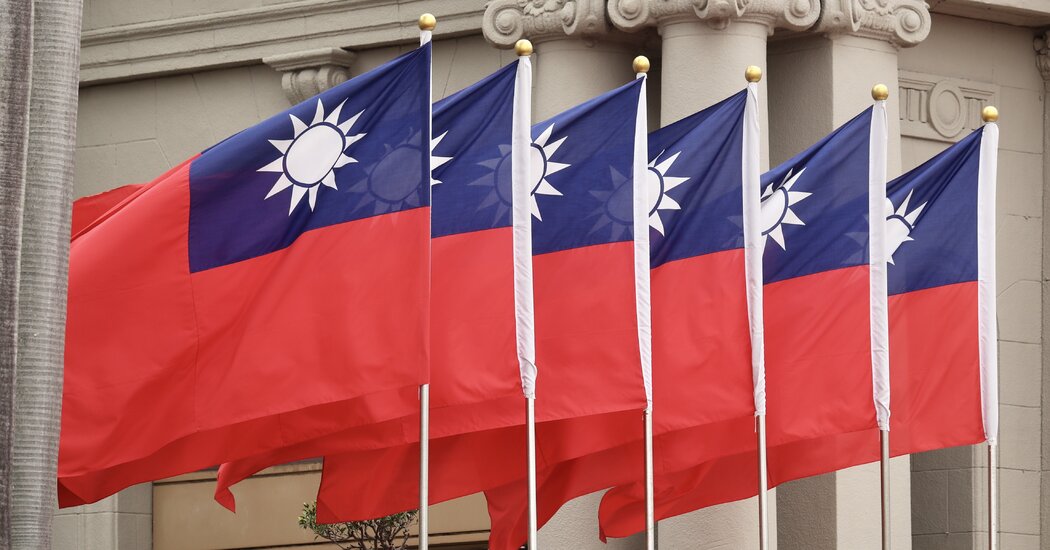 WASHINGTON — The United States should organize a diplomatic campaign among partner nations to push back against China’s increasingly forceful efforts to shut Taiwan out of United Nations agencies and other international organizations, according to a new report.

The report from the German Marshall Fund of the United States recommends that U.S. officials go on the offensive against China’s pervasive presence across top ranks of the United Nations and its “growing coercive and corrupting influence as well as its efforts to promote and legitimize its agenda across the U.N. system.”

Among other things, the United States should carry out “a sustained effort to lobby against the appointments and elections” of Chinese officials in high positions in U.N. agencies, the authors wrote. The New York Times saw a final draft of the report before its scheduled release on Thursday.

The assessment comes as concerns that the Chinese Communist Party might take measures against Taiwan and its 23 million people have grown in Washington and Taipei because of the invasion of Ukraine by President Vladimir V. Putin of Russia.

On Feb. 4, two weeks before the invasion, Mr. Putin met with President Xi Jinping of China in Beijing, and the two announced a “no limits” partnership. They released a 5,000-word statement covering broad geopolitical issues in which Russia reaffirmed its support for Beijing’s “One China” principle, which asserts the self-governing, democratic island of Taiwan is a part of China.

U.S. and Taiwanese officials have been trying to gauge whether Mr. Putin’s war in Ukraine will have any effect on the long-running goal of the Chinese Communist Party to bring Taiwan under its rule. Mr. Xi could see Mr. Putin’s invasion of Ukraine as a parallel to military actions he could take to seize Taiwan. At the same time, the harsh economic sanctions imposed on Russia by the United States and its European and Asian allies and the fierce resistance of Ukrainians to the Russian military could serve as deterrents.

President Biden and Mr. Xi discussed Taiwan in a video call last Friday. Taiwan is the most sensitive and intractable issue between the United States and China. The United States provides defensive equipment to Taiwan and maintains “strategic ambiguity,” meaning it leaves open whether it would send armed forces to defend Taiwan if China tries to invade. And while the United States does not recognize Taiwan as an independent nation, it also does not state a position on the territory’s sovereign status relative to China.

China insists Taiwan is part of its territory and cannot exist as a sovereign nation. Taiwan’s independence is recognized by 14 sovereign states — including 13 member states of the United Nations — a number that has fallen over the years as China has pressed nations to drop the recognition and normalize diplomatic ties with Beijing. Last December, Nicaragua switched recognition to China from Taiwan, following similar moves from 2017 to 2019 by Panama, the Dominican Republic, El Salvador and the Solomon Islands.

The report from the German Marshall Fund, a research group that promotes democracy, laid out similar examples of coercive diplomacy by China in the constellation of United Nations agencies and associated groups. (The authors, Jessica Drun and Bonnie Glaser, both Taiwan experts, said they had received funding from the Taiwanese government for the research but that the views in the report were their own. Separately, Laura Rosenberger, senior director for China and Taiwan at the White House National Security Council, was a senior fellow at the German Marshall Fund.)

A United Nations spokesperson did not reply to a request for comment.

China’s efforts in the United Nations context are part of a campaign to shift the understanding of that body’s Resolution 2758, passed in 1971. The resolution says the People’s Republic of China would be the only legitimate representative of China to the United Nations, meaning it would take the seat held by the government of Taiwan. The resolution does not say anything about the sovereign status of Taiwan, but China has been trying for years to change people’s understanding of the language so they think the text says Taiwan is part of China, Ms. Drun and Ms. Glaser wrote.

China has “used U.N. Resolution 2758 and bilateral normalization agreements with other member states to falsely claim that its ‘One China’ principle is a universally accepted norm,” they wrote, adding that China gets support for its views partly “through economic pressure on governments.”

Those efforts allow China to more easily argue that Taiwan should be shut out of international organizations.

“They have lots of reasons to solidify the ‘One China’ principle, as they put it, in the minds of the leadership of the United Nations,” said Thomas Christensen, the interim dean at Columbia University’s School of International and Public Affairs and a former State Department official.

China pressures private companies and nongovernment groups too. Marriott, Delta Air Lines, Qantas, Zara and Medtronic all changed their website language in recent years after Chinese officials criticized the companies for listing Taiwan as a separate country. Last year, Chinese officials at the United Nations forced a Colorado high school to change language on its website before the school’s students were allowed to visit a U.N. organization. The school had to add “province of China” to text about Taiwan.

The German Marshall Fund report highlights an agreement between China and the World Health Organization as an egregious instance of a move to shut Taiwan out of an international group. The ban on Taiwan was especially harmful in the early months of the pandemic, when Taiwan had accumulated information on Covid-19 but could not share it with the W.H.O., the authors wrote. In May 2020, Secretary of State Mike Pompeo and other U.S. officials tried to lead a coalition of countries to get Taiwan observer status at an assembly convened by the W.H.O., but failed.

“Beijing is setting the table for a war to annex Taiwan, and its insistence on these linguistic changes are designed to absolve Beijing of its commitments under the U.N. Charter and to head off international sanctions and condemnation,” said Matthew Pottinger, a deputy national security adviser in the Trump administration and the chairman of the China program at Foundation for the Defense of Democracies. “It won’t work, because the world won’t abide Beijing slaughtering its peaceful neighbors irrespective of whether Taiwan is viewed as a sovereign country or part of ‘one China.’”

Liu Pengyu, a spokesman for the Chinese Embassy, said that participation by the “Taiwan region” in activities of international organizations, including the W.H.O., “must be handled in accordance with the ‘One China’ principle.”

China’s efforts have fueled a growing sense of resentment toward the mainland among Taiwanese. More than ever, many of the island’s residents identify as solely Taiwanese, and not Chinese.

The issue of Taiwan’s representation on the international stage has been a source of rare bipartisan consensus between the island’s two main political parties: the ruling Democratic Progressive Party, which tries to bolster Taiwanese identity, and the Kuomintang opposition party.

Taiwan has consistently pushed for meaningful participation in the United Nations. But China, which is a permanent member of the Security Council, has closed off almost any possibility of that happening.

“It is very high on China’s agenda to stop Taiwan’s visibility in the world,” said Su Chi, a former official in the Kuomintang who served as the chairman of Taiwan’s Mainland Affairs Council.

“Even the KMT resents that,” he added. “We have the aspiration for dignity.”

But China’s influence in the United Nations and related agencies is growing.

“Due to China’s powerful interests in the U.N., it’s very difficult for these agencies to let Taiwan enter into these organizations,” said Eugene Kuan, an associate professor of international politics at National Taiwan Normal University. “They don’t want to cause any disputes or any conflict with China, so it’s better for them not to take care of this issue.”