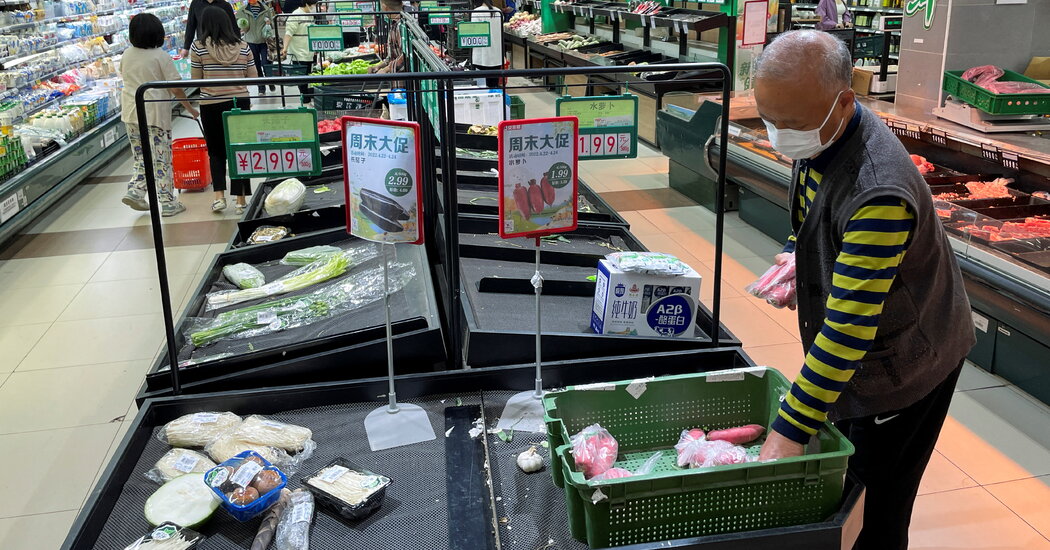 A fresh coronavirus outbreak in China’s capital has raised concerns that Beijing could become, after Shanghai, the next Chinese megacity to put life on hold to contain the spread of the Omicron variant. The central government has leaned heavily on lockdowns despite their high social and economic costs, in pursuit of the Communist Party leader Xi Jinping’s “zero Covid” strategy of eliminating infections.

On Monday, the Beijing government said that 70 coronavirus cases had been found in Beijing since Friday. Nearly two-thirds have been in the district of Chaoyang, which ordered all 3.5 million residents to take three P.C.R. tests over the next five days. In other cities, mass testing in response to initial coronavirus cases has sometimes been a prelude to stringent lockdowns, like the four-week one in Shanghai that has kindled widespread complaints from residents there.

The outbreak in Beijing, the seat of Communist Party power and a crowded metropolis, has added significance for Mr. Xi, who had ordered that the nation’s capital remain free of the virus. An extended lockdown there would add to the political and economic pressures on his government.

“Chaoyang District is now the topmost focus for pandemic prevention,” Cai Qi, the Communist Party secretary of Beijing, and a protégé of Mr. Xi’s, said in instructions cited in the official Beijing Daily newspaper on Sunday. Mr. Cai appeared determined to show that Beijing would not be hesitant about taking steps to stifle infections, which has been a criticism leveled by some at Shanghai.

“Important pandemic measures cannot be left waiting till the next day,” Mr. Cai added. “All at-risk sites and individuals involved in these cases must be checked that day.”

The outbreak in Beijing is another blow to the already stumbling Chinese economy. Waves of selling hit the Shanghai and Shenzhen stock markets on Monday, driving down by 5 percent in a single day the CSI 300 Index of large Chinese companies’ share prices.

Cases have been spreading in the community for a week, with multiple rounds of transmission, Pang Xinghuo, deputy director of the Center for Disease Control and Prevention in Beijing, said at a news conference on Sunday.

Chaoyang is the most fashionable district in the city, with numerous luxury shopping malls and expensive apartments. At Shin Kong Place, a mall with stores for brands like Chanel, Saint Laurent and Versace, long lines quickly formed at the high-priced supermarket as families rushed to stockpile food.

At a P.C.R. testing booth on the street a block away, several dozen people were still in line at 8 p.m. on Sunday when the staff members inside, in full-body white hazmat suits, announced that they were closing for the night. The closing of the booth provoked anger from the people standing in the darkness waiting for the $3.80 tests, for which the results are typically returned in 12 hours. Many shouted at the staff, and several hit and kicked the booth and tried to wrench open its door and to argue with the staff.

Chaoyang had not required residents to be tested on Sunday night instead of Monday. But without new test results, residents are not allowed to catch a train or flight to another city before any possible lockdown is imposed. When Beijing had a small outbreak in the summer of 2020, people flocked to train stations in a rush to leave the city before they could be trapped in it.

Officials in Beijing will hope to avoid the experience of Shanghai, where a stifling lockdown this month has dragged down China’s economic outlook and stirred public anger. Residents have shared bleak stories and criticisms of the lockdown through online letters, a rap song, and a bleak video.

“We Shanghai residents feel that there have been many absurd, baffling and even cruel compulsory measures,” said Ji Xiaolong, a resident of the city, who has publicly criticized the government’s handling of the lockdown.

“At the start of the lockdown, 80 percent of people approved of it and the government’s policies,” Mr. Ji said in a telephone interview, noting the difficulties getting food and medical care. “Now, I’d estimate that fewer than 20 percent still support the government’s lockdown.”

Party leaders, however, appear determined to defend their goal of “zero Covid” — virtually no infections at large in Chinese society.

On Monday, the Shanghai health authorities said that the city had confirmed 19,455 cases on the previous day, a drop of 1,603 from the preceding daily count. The city has allowed residents of some areas deemed safe to step outside, but leaders have warned that the wider restrictions must stay in place until infections are wiped out.

“Shanghai is now at a crucial moment in the zero offensive,” Sun Chunlan, the Chinese vice premier overseeing the lockdown, said last week. “The pandemic won’t wait for people, and there can be no thought of putting our feet up and taking a breather.”

Residents in the Pudong District of Shanghai shared pictures over the weekend of new metal fences and cage-like barriers going up around apartment exits, part of the district’s drive to enforce “hard” isolation for locked-down buildings.

A new security deal. The Solomon Islands signed a sweeping security agreement with China that could threaten the stability of the entire Asia-Pacific region. The deal gives Beijing a foothold in an island chain that played a decisive role in World War II and could be used to block vital shipping lanes.

A pause on wealth redistribution. For much of last year, China’s top leader, Xi Jinping, waged a fierce campaign to narrow social inequalities and usher in a new era of “common prosperity.” Now, as the economic outlook is increasingly clouded, the Communist Party is putting its campaign on the back burner.

A high point of the public pushback against the city’s policies has been “Sounds of April,” a six-minute video that — against melancholy music and black-and-white overhead footage of Shanghai — replays the voices of residents begging for help from officials. The video spread fast and wide on Chinese social media last week before censors pulled it down.

It opens with Shanghai officials saying last month that a lockdown would not be necessary, and then that it would last just a few days.

Then comes a montage of voices: a truck driver carrying food for the stricken city who says his shipment risks rotting because nobody has come to receive it; a son saying that his aged and ill father was refused hospital care; a resident forced to quarantine in an unfinished hospital; a local official asking for understanding from a man whose pleas for medical attention have gone unanswered.

The video had spread quickly among Shanghai residents, reflecting widespread disdain for the official news media’s reporting on the crisis, Mr. Ji said.

“This video pulled the fig leaf off these forces,” he said. “At this point of the crisis, Shanghai people have begun to pull together.”

Some critics of Shanghai’s response are senior members of the academic establishment who usually keep their views muted.

In a submission to the government that spread on Chinese news media, Tang Xiaotian, a professor at Shanghai University of Political Science and Law, warned that officials should avoid potentially illegal measures to confine people. Residents have been angered by measures such as the barriers around apartments that could hamper escape in a fire, he noted.

Official propaganda about the lockdown in Shanghai had “hurt the credibility of the government,” Liu Xiaobing, a professor at Shanghai University of Finance and Economics, who is a member of China’s national legislature, wrote in an essay shared on Chinese social media. It was also later removed. He did not respond to an email seeking comment.

“The policy enforcers only worry about the trouble they could bring on themselves if they relax controls,” Mr. Liu wrote. “They never worry about being called to account from the harm caused by dead-handed restrictions.”