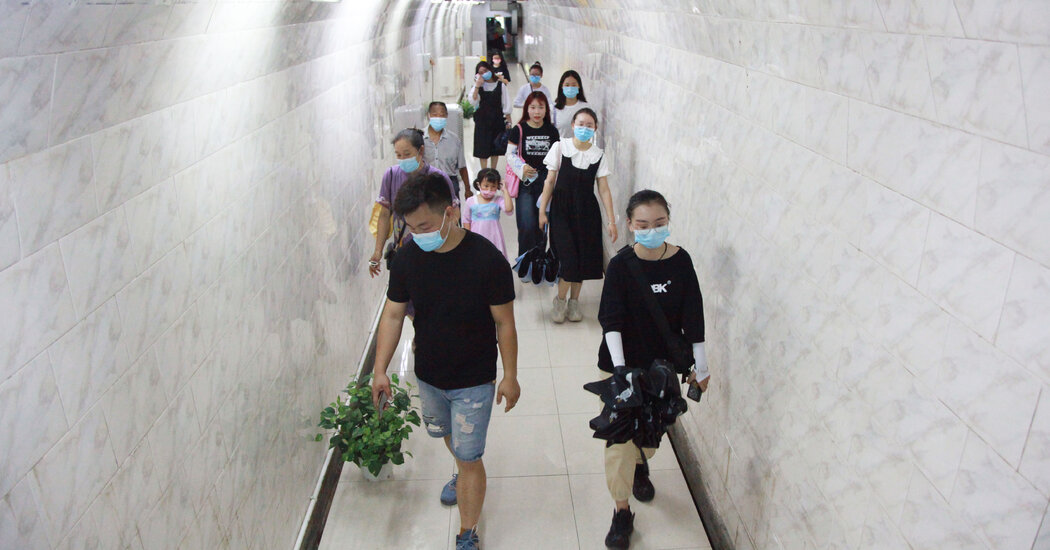 HONG KONG — As dozens of cities in eastern and southern China issued heat alerts on Tuesday, with some temperature forecasts exceeding 104 degrees over the next 24 hours, health workers conducted outdoor coronavirus tests with packets of frozen snacks strapped to their white hazmat suits. Roofs melted, roads cracked and some residents sought relief in underground air-raid shelters.

The heat wave is forecast to persist for at least two weeks.

The scorching heat reflects a global trend of increasingly frequent episodes of extreme weather driven by climate change. In June, weeks of heat waves plagued northern China, at the same time that floods displaced millions of people in the central and southwestern parts of the country.

A museum in Chongqing displaying imperial relics from the Palace Museum closed for repairs after sections of its tiled roof melted, according to a notice on Monday. In a town in southern Jiangxi Province, state TV showed a heat-damaged section of a road arched up at least six inches, according to the Reuters news service.

Residents of the city of Nanjing rested on socially distant chairs in underground shelters that have been open to the public since Sunday. At the Chengdu Zoo and the Shanghai Zoo, animals were given slices of watermelon and bite-size ice treats.

The unrelenting heat also coincides with rounds of mandatory P.C.R. testing across the country, including in Shanghai, as the authorities there seek to curb the rapid spread of the Omicron variant and its subvariants.

A photograph posted on social media showed health workers from the Suixi County Hospital of Traditional Chinese Medicine tying frozen desserts to the hoods of their hazmat suits as residents lined up for coronavirus tests. A video showed a Shanghai health care worker releasing pools of sweat that had collected in the suit’s foot covering.

Another video showed a health worker in Henan succumbing to heat stroke, panting on the ground as his colleagues fanned him with packaging from test kits.

Mortality related to excess heat has risen in China by a factor of four between 1990 and 2019, reaching 26,800 deaths in 2019 according to a study published by The Lancet in 2020. The rising temperatures have also increased the risks of wildfires and encouraged the spread of dengue fever in the country, the study said.