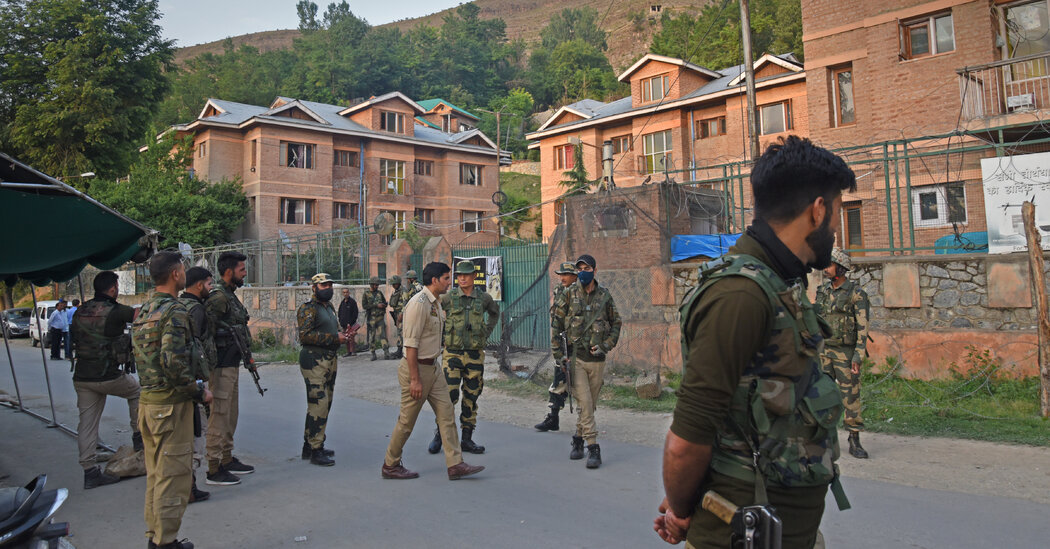 The return of minority Hindus to Kashmir, two decades after an exodus in the face of militant attacks and threats, has been held up by successive Indian governments as an illustration of how they are bringing normalcy to the restive Himalayan region.

But Kashmiri Hindus say that their lives have become anything but normal after an intensifying spate of targeted killings — and that they desperately want out, yet again.

The administration of Prime Minister Narendra Modi, they say, is preventing thousands of Hindus from fleeing their Kashmir residential colonies. The Hindu residents are demanding that the authorities lift the blockades and let them leave after three killings this week: a teacher gunned down outside her school, a bank manager shot at his desk and, on Thursday night, a laborer killed while working at a brick kiln.

“Our demand is to relocate us to anywhere other than Kashmir, any corner of India,” said T.N. Pandita, a father of two who works as a clerk at the local court in the Baramulla district.

“This morning, we tried to get out, but we were physically barred from leaving,” Mr. Pandita said on Thursday. “Our camp is locked, and the central police forces are deployed outside.”

Mr. Modi’s government has been invested in projecting the majority-Muslim region as a stable, integrated part of India after it dissolved the region’s elected government and revoked Kashmir’s semiautonomous status in 2019 to bring it under the direct rule of New Delhi.

Stripping the region of its special status had long been a goal of India’s Hindu nationalists. Under the direct rule that followed, a clampdown has increasingly quashed dissenting voices.

Kashmir has been disputed between India and Pakistan since the end of British rule in 1947. In the late 1980s, a Kashmiri separatist movement, which received support and training in Pakistan, intensified the targeting of the region’s Hindus, known as Pandits. A mass migration of tens of thousands of Hindu families — perhaps 300,000 people in all — followed. Only a few hundred Hindu families remained.

A little over a decade ago, as the security situation in the valley improved under a heavy Indian military presence, the government encouraged Kashmiri Hindus to return by offering them incentives that included government jobs and payments for buying or rebuilding homes. Thousands of Hindus accepted the offers, taking up residence in half a dozen Kashmir residential colonies referred to as transit camps.

But Kashmiri Hindu organizations and local residents say there has been a renewed wave of targeted killings in the past two years, an apparent retaliation for Mr. Modi’s decision to revoke the region’s semiautonomous status. Mr. Modi also tried to reduce the requirements for Hindus to take up local jobs and buy property, which the militants and others cite as an effort to reshape the region’s demographics.

About 200 families who lived outside the camps, or who managed to get out of them, have left the valley in the past three days, local Hindu leaders say.

“We used to get all the support from the locals. But all of a sudden, from the last two and a half years, the scenario has fully changed,” said Ankaj Tickoo, a 31-year-old engineer with the power department in the Srinagar district.

Sandeep Raina, 38, who works in the Anantnag district for the same agency, said he had received phone calls from the official in charge of four police stations discouraging him from doing site visits in their areas.

“We are not going to the office since the killing of Rahul Bhatt — that was 21 days ago, and since then more killings have taken place,” he said, referring to a civil servant who was shot inside his office. “I am worried about the safety of my family. I am not able to send my child to school.”

In a letter to India’s chief justice on Wednesday, Sangarsh Simiti, a Kashmiri Pandit organization, accused the government of “playing with the lives of the religious minorities in Kashmir Valley” and asked the Supreme Court to intervene.

The organization said that there had been more than a dozen targeted attacks, some fatal, recorded against Hindus since 2020, and many more against Muslims seen as supporting the government. It also detailed how the authorities were now preventing Kashmiri Hindus from relocating to more secure areas.

Videos posted by Hindu residents from the Mattan camp, in the Anantnag district, showed a tense situation during a protest where local officials urged residents to stay. The officials said that they would increase security measures and that residents could work closer to home.

The Kashmiri Hindus told the local officials that it was too late for such measures. Some of them chanted, “What do we want? A right to live!” and “The only solution — relocation! Relocation!”

Ranjan Jotshi, 48, a protest leader who works at the local department of social welfare, said that he had been part of a delegation that visited the region’s governor for a meeting, and that the police chief had told attendees it would take three years to rid the region of the remaining militants.

Hours after the meeting with the local officials in the Mattan camp, as panic grew over the killing of the bank manager, security forces barricaded the camp’s exit with vehicles to stop families from leaving.

“Don’t force Kashmiri Pandits to pelt you with stone,” Mr. Jotshi is seen in a video telling the police, referring to an act that local Kashmiri Muslim youths sometimes resort to against the region’s heavy security forces.