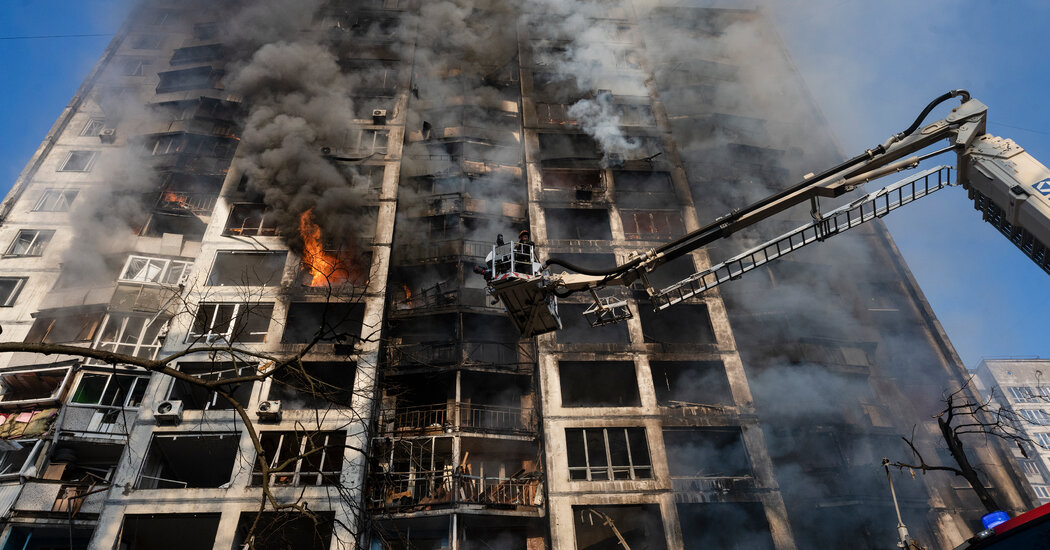 LONDON — Three European leaders staged a defiant show of support for Ukraine on Tuesday, traveling to its besieged capital, Kyiv, even as a relentless Russian artillery bombardment left apartment towers in the city ablaze, forcing terrified residents to flee into the street with only the clothes on their backs.

The dramatic visit by the prime ministers of Poland, the Czech Republic and Slovenia, which unfolded in tight secrecy as they crossed the Ukrainian border by train after dawn, was a strikingly personal gesture. But it caught other European leaders off guard, angering some and baring uncomfortable divisions in how best to demonstrate Western solidarity with Ukraine.

It also came as President Vladimir V. Putin of Russia disparaged the second consecutive day of negotiations with Ukraine, undercutting the faint glimmers of hope raised from talks the day before that both sides were looking for a way to halt the war.

The Kremlin slapped retaliatory sanctions on President Biden and other senior American officials. Mr. Biden announced his own plans to travel to Europe next week to showcase the unity of the NATO alliance in the face of Russian aggression.

A spokesman for Poland’s prime minister, Mateusz Morawiecki, said the three visitors were “de facto” representing the European Union in Ukraine. In Brussels, however, officials said the trio did not have the E.U.’s blessing, and some European diplomats complained that the trip was too risky, given the Russian forces encircling Kyiv.

Others said they admired the audacity of the group, which also included Prime Minister Petr Fiala of the Czech Republic and Prime Minister Janez Jansa of Slovenia, casting it as a powerful symbol of the backing for Ukraine among countries on Europe’s eastern flank, where the specter of Russian aggression looms larger than in Paris or London.

Still, for all the symbolism of standing shoulder-to-shoulder with Ukraine’s leaders under the threat of Russia’s rockets, Ukraine was facing the devastating barrage largely on its own. The mayor of Kyiv, Vitali Klitschko, imposed a 35-hour curfew, starting on Tuesday evening, which suggested the capital was entering an even more difficult phase of its grinding struggle to hold off Russian troops and tanks.

“This is their attempt to annihilate the Ukrainian people,” President Volodymyr Zelensky of Ukraine said in an emotional video address to the Canadian Parliament, repeating his plea for NATO to enforce a no-fly zone over the country. “It is an attempt to destroy our future, our nation, our character.”

Mr. Zelensky asked the lawmakers to imagine if the CN Tower in Toronto were shelled like the towers in Kyiv. His language has become more pointed, even scolding, with each speech to a Western audience, revealing his frustration with leaders who have resisted more direct military involvement out of fear that it would entangle them in a wider conflict with Russia.

The Ukrainian leader, who has become a hero to many in the West, is scheduled to speak via video to Congress on Wednesday, where he is expected to amplify his pleas for more help and increase the pressure on the United States and its allies.

On Tuesday evening, the Polish state broadcaster carried video of the Czech, Slovene and Polish leaders meeting Mr. Zelensky and other officials across a long table, with Ukraine’s blue-and-yellow flag behind them.

“They are here to support us,” Mr. Zelensky said at a news briefing after the meeting, which also was shown on Ukrainian television. “It is a great, courageous, right, friendly step. I am confident that with such friends, such countries and neighbors and partners, we can really win.”

A photograph posted earlier on Mr. Morawiecki’s Twitter account showed the three men poring over a map, seated in what appeared to be a train carriage en route to the Ukrainian capital.

“It is here, in war-torn Kyiv, that history is being made,” Mr. Morawiecki said in the Twitter post. “It is here, that freedom fights against the world of tyranny. It is here that the future of us all hangs in the balance.”

The White House announced that Mr. Biden would fly to Brussels for an extraordinary summit meeting of NATO on March 24. That may result in further economic and military aid for Ukraine but will likely fall short of Mr. Zelensky’s request for a no-fly zone. Administration officials declined to say whether Mr. Biden planned to meet with the Ukrainian president, whom he has called a hero. But they said Mr. Biden may go on to somewhere in Eastern Europe to meet with refugees streaming out of Ukraine.

The river of people fleeing the war continued unabated on Tuesday, as Russia claimed to have seized control of the strategic Kherson region in the south. Russian forces kept up their pounding of civilian targets in Kyiv, where Ukrainian troops were fortifying intersections with sandbags, tires, and iron spikes.

A pre-dawn rain of rockets on Kyiv shattered windows, left craters in buildings, and turned a 16-floor apartment house into a towering inferno. The fire spread quickly after a missile struck the building, blowing a jagged hole at its entrance. Firefighters rescued residents from windows by ladder through billowing smoke. By midafternoon, they had carried out two bodies encased in black bags.

“I came out with nothing,” said Mykola Fedkiv, 85, a retired geologist. “I left everything, my telephone, my medicines, everything.”

When the missile struck, Mr. Fedkiv fled his 12th-floor apartment and made his way down the stairs. He climbed through the blasted entrance hall and found himself in the bomb crater. People pulled him out by his arms. He stood outside for hours, hoping to re-enter his apartment to collect personal documents. Asked where he planned to stay the night, he responded, “God knows.”

Conditions were even more desperate in the coastal city of Mariupol, which has been pummeled by Russian forces in a two-week siege that has left some residents crushed in the rubble and many others dying in a winter freeze with no heat, food, or clean water. Officials can no longer account for the number of dead and missing.

Officially, 2,400 civilians killed in Mariupol have been identified, but Pyotr Andryushchenko, an adviser to the city government, said he believed the toll was far higher, possibly as many as 20,000. Ukrainian estimates of the number of people trapped have ranged from 200,000 to 400,000.

A show of E.U. support. The leaders of Poland, the Czech Republic and Slovenia headed to Kyiv to express the European Union’s “unequivocal support” and offer financial help to Ukraine. The visit was kept secret until the last minute as fighting rages around the Ukrainian capital.

Mr. Andryushchenko said 2,000 vehicles had managed to escape Mariupol on Tuesday and that another 2,000 were packed and ready to leave. Officials told civilians to “delete all messages and photos from phones” in case Russian soldiers searched them for signs of support for Ukrainian forces.

The perils of reporting accurate information from Ukraine’s combat zones were further underscored Tuesday with news that a Fox News cameraman and a Ukrainian colleague had been killed in an attack on Monday outside Kyiv — raising to at least three the number of journalist fatalities in Ukraine in the past few days.

In Kherson, a southern city under Russian occupation, the mayor said that members of Russia’s national guard were rounding up activists who opposed Russia’s presence, possibly trying to recruit them through coercion.

“They’re all in the city, in the jail,” the mayor, Igor Kolykhaev, wrote in several text messages, referring to the activists. Russian troops, he said, “collect them, hold them, work them over and release them.”

Kherson was the first major city to fall to Russian forces after the Feb. 24 start of the invasion. Although Kremlin officials had predicted that the Ukrainian people would welcome their “liberation” by Russian troops, residents of Kherson have been defiant, regularly gathering in the central square to protest the Russian presence, even when Russian troops fire into the air to disperse them.

Russia claimed to have captured the entire Kherson region, potentially strengthening its ability to push west toward the strategic port cities of Mykolaiv and Odessa. A senior Ukrainian military official, speaking on the condition of anonymity, confirmed that Russian forces were in control of much of the Kherson region, but said Ukrainian forces were attacking their positions and inflicting losses.

Negotiations via video link between Russia and Ukraine continued for a second day on Tuesday, though Mr. Putin doused prospects of any imminent breakthrough. In a phone call with the president of the European Council, Charles Michel, Mr. Putin complained that “Kyiv is not demonstrating a serious attitude toward finding mutually acceptable solutions,” according to the Kremlin.

Mr. Putin also continued to struggle in the information battle with Ukraine. On Tuesday, President Emmanuel Macron of France said his country could offer diplomatic “protection” to a Russian state television employee who was detained and fined over an on-air antiwar protest on Monday.

The employee, Marina Ovsyannikova, burst onto the live broadcast of Russia’s most-watched news program on Monday evening, yelling, “Stop the war!” and holding a sign that read, “They’re lying to you here.”

Russia also faced further isolation from Britain, which imposed sanctions on more than 370 people it labeled oligarchs, political allies of, or propagandists for Mr. Putin. Among those blacklisted: Dmitri A. Medvedev, the former president of Russia; Mikhail Mishustin, the current prime minister; and Mikhail Fridman, the billionaire founder of Alfa Bank, one of the country’s largest private banks.

Russia, for its part, said it had sanctioned 13 Americans including Mr. Biden, Secretary of State Antony J. Blinken and Defense Secretary Lloyd J. Austin III in response to American sanctions against Mr. Putin and other officials. Also on its list was Hillary Rodham Clinton, the former secretary of state, and Mr. Biden’s son, Hunter Biden.

Mr. Biden’s press secretary, Jen Psaki, shrugged off the news, suggesting in jest that the Kremlin’s announcement might have missed its intended mark. The president, Ms. Psaki said, is a “junior, so they might have sanctioned his dad by mistake.”