Europe’s Trains Take Fighters to Ukraine, and Bring Back Refugees 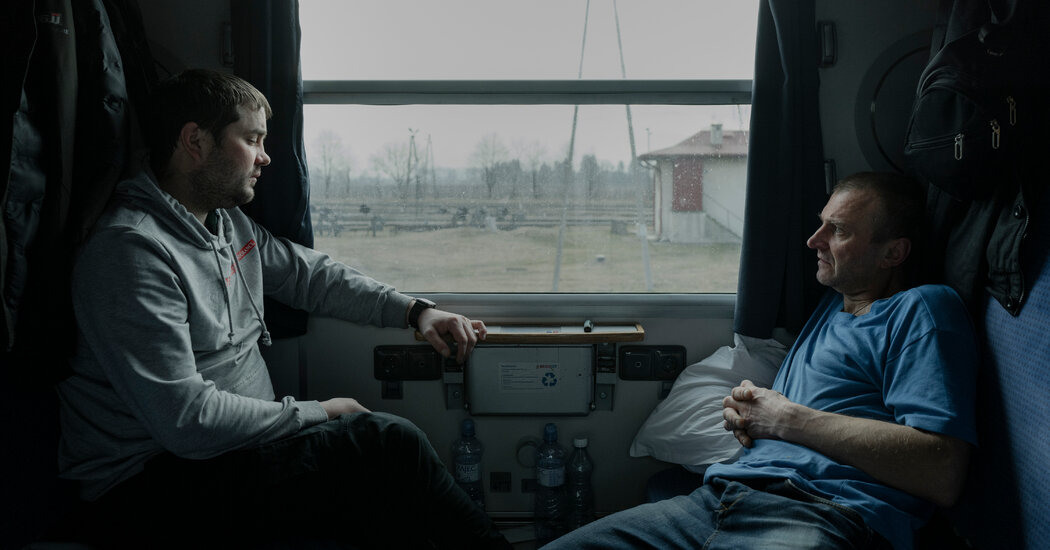 Europe’s Trains Take Fighters to Ukraine, and Bring Back Refugees

ABOARD THE PRAGUE-PRZEMYSL TRAIN — On the 12th night of the war, on a platform at Prague’s central train station, Vitali Slobodianiuk and Volodymyr Kotsyuba met for the first time.

They had few things in common: both were Ukrainians working in construction sites in the Czech Republic. On that frigid evening, both got on a train back to Ukraine to join the fight against Russia’s invading army.

Mr. Slobodianiuk, a 47-year-old former soldier, and Mr. Kotsyuba, a 35-year-old university graduate, shared a neat compartment on the sleeper train from Prague to the Polish-Ukrainian border town of Przemysl, sticking together, even though most carriages were virtually empty.

“We’ll wait in Przemysl for four hours, then we’ll catch the train to Lviv,” Mr. Slobodianiuk said, referring to the western Ukrainian city that is a key node of the country’s railway system and is currently a safe haven for refugees fleeing by train.

The train, run by a Czech private operator, RegioJet, was on a special mission that night, and every night. It carried humanitarian aid to the border, as well as a handful of people — volunteer fighters and Prague-based Ukrainians rushing to the Polish-Ukrainian border to collect fleeing family members.

On the way back, it took refugees into the heart of Europe, away from Ukraine and the war, and deeper into open-ended displacement.

Europe’s trains and railways boomed in wartimes past. From the second half of the 19th century onward, trains carried soldiers to and from the front lines, supplied armies in combat, and grew to meet the needs of the continent’s defining conflicts. Most grimly, trains were taken over by the Nazis to take millions of Europe’s Jews to their deaths in camps in Poland and elsewhere during the Holocaust.

In the 1990s and 2000s, as the European Union began to expand eastward and peace took hold, trains instead became a key vehicle for European integration.

Interrailing became a rite of passage for young Europeans who enjoyed cheap, borderless travel where trenches once lay, in what felt for a while like irreversible progress. Migrant workers from the European Union’s poorer members in the East rode trains to jobs in the West as the labor market opened up to them.

Now Russia’s invasion of Ukraine is turning Europe’s trains and ornate imperial-era stations into a new refugee crisis network, putting them on a war footing yet again. At least a dozen state- and privately owned railway operators have opened up their services for free to refugees, and their cargo trains are being deployed to bring humanitarian aid to Ukraine.

From Prague to Poland

On Monday, on the RegioJet night train from Prague to the Polish station of Przemysl, the last stop before Lviv in western Ukraine, the few occupied compartments held intimate stories of heartbreak and sacrifice.

Mr. Slobodianiuk, the former soldier, a slender man with short hair and veiny arms, was heading home to Vinnytsia in central Ukraine to join his wife, twin daughters and three-year-old grandson. The last time he held a weapon was in 2016, in Mariupol, the southern Ukrainian city that had been targeted by Russian-backed separatists, he said. He was ready to do it again.

“I’m afraid, everyone is afraid,” he said, clasping his hands, toughened and callused by years of fighting and manual labor. “Fear is all around us. We hope this will end soon.”

His fellow traveler, Mr. Kotsyuba, was headed to the western Ukrainian city of Slavuta where his mother and grandmother still were. He was leaving his wife and two young daughters behind, in Prague.

“My wife said, ‘I don’t want to see you leaving’. While she was at work I took the children out for a walk for the whole day, we made pizza,” he said. “Then I called my wife and told her I’m on the train.”

Both men had waited until payday to go to Ukraine, they said. They had found it hard to focus on anything else since the war began.

“For 12 days of war now, it’s been impossible to work, because you see the news, you’re always thinking about the war,” said Mr. Kotsyuba.

“It’s my choice, not my dad’s, not my mum’s, not my wife’s,” he said, like he was still convincing himself he was making the right call.

The 19th century Przemysl station, with its golden chandeliers, arched passages and ornate pale blue plaster moldings, was packed with families who had fled Ukraine and taken the slow journey past an overwhelmed border crossing into Poland, in below-freezing temperatures, carrying children, pets and a bag or two.

More than 2.5 million people have fled Ukraine since the Russian invasion on Feb. 24, a staggering figure in an incredibly brief period of time, most of them to Poland, according to local authorities and the United Nations refugee agency. Half of the refugees are children.

No agreement. The Foreign Ministers of Ukraine and Russia met in Turkey, for the first time since the start of the war, and failed to stop the fighting. Foreign Minister Sergey V. Lavrov of Russia declared that a cease-fire was never up for discussion.

The small city of Przemysl fast became a key point of entry for hundreds of thousands of refugees in the course of two weeks, turning into an operations center and temporary shelter for the exhausted, hungry people fleeing Ukraine. Volunteers blew up balloons in poodle shapes to entertain children. Nuns handed out food. And Ukrainian-speaking helpers directed people to the trains that would take them to new homes, delivering them deeper into the heart of Europe.

On the RegioJet back to Prague, the same one that had quietly slipped through the night across the plains of the Czech Republic and Poland, bringing fighters to the border, some four hundred people, overwhelmingly women and children of all ages, filed slowly into the velvet-blue compartments.

After days on the road, they removed their coats and pulled off their boots. They were handed hot cups of tea, soft blankets and warm meals. For most, it was the first moment of respite and reflection after days of traveling across Ukraine into Poland and safety.

And as the train pushed off the platform, some compartments fell quiet, passengers staring past each other or out the window. A few were quickly darkened, their exhausted occupants asleep. Others were abuzz with small children finally freed of heavy clothes and fear, playing on the bunk beds.

In one compartment, sisters Marina Krivoshey and Iryna Kapshuk, and their daughters Alisa and Zlata, both nine years old, were settling in to rest after days on the road in tough conditions. They were headed to Prague to join a relative who has long lived and worked there.

The four had fled from Poltava, in eastern Ukraine, not far from Kharkiv, a key city that has been pummeled by the Russian army and seen extensive civilian casualties.

“In the center of the city it was calm, but in the suburbs there had been shooting. For the last few days the air raid siren sounded three times a day,” Ms. Kapshuk said.

“We were sitting in the basement and we heard the shooting. It was scary,” little Zlata said.

All around them, trouble was growing. Not only was Kharkiv in the throes of air raids, but other cities in the region like Sumy and Kyiv itself were coming under attack. It was time to go.

For Zlata and her cousin Alisa, the flight to safety was taking on a sense of adventure now that they were on the train to Prague.

Schools had been closed, the girls said, and surely they’d be back home by March 20 when they were scheduled to reopen. “Maybe we’ll do online teaching again,” Alisa said. “My teacher was too old to understand how it works and she didn’t give us any homework!” her cousin exclaimed.

As the night train gathered speed, the two mothers said it was good for the girls to see the escape as a holiday.

“At least with Alisa, we will get to see the world!” little Zlata said.