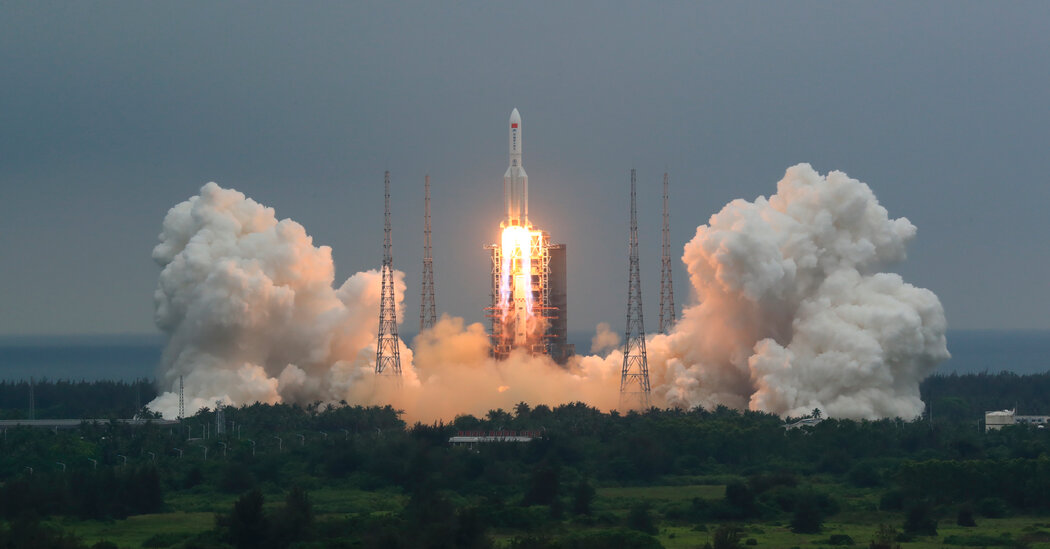 Another big Chinese rocket is about to go up on Sunday, and once again, no one knows where or when it will come down.

It will be a replay of two earlier launches of the same rocket, the Long March 5B, which is one of the largest currently in use and designed to carry massive modules of China’s Tiangong space station to orbit. For about a week after launch, the world’s watchers of space debris will be tracking the 10-story, 23-ton rocket booster as wisps of air friction slowly pull back it back down.

The chance that it will strike anyone on Earth is low but significantly higher than what many space experts consider acceptable.

Here’s what you need to know about the launch.

When is the launch and how can I watch it?

The space station module, which is named Wentian, is scheduled to launch at around 2 p.m. Beijing time on Sunday, according to state media, from Hainan Island in Southern China. That’s about 2 a.m. Eastern time in the United States.

Chinese state-sponsored television is providing English-language coverage of the launch, which you can watch in the video player embedded above.

What is China launching?

The powerful rocket was designed specifically to launch pieces of China’s Tiangong space station. The latest launch will carry Wentian, a laboratory module that will expand the station’s scientific research capabilities. It will also add three more spaces for astronauts to sleep and another airlock for them to conduct spacewalks.

As of this April, China had completed a total of six missions for the construction of the space station. Three crews of astronauts have lived aboard the station, including the trio that will receive the Wentian module this week.

Completing and operating the space station is described in state media broadcasts as important to China’s national prestige.

“China is not and has not done anything the U.S. has not already done in space,” said Joan Johnson-Freese, professor at the U.S. Naval War College and former chair of the National Security Affairs department. “But it is reaching technical parity, which is of great concern to the U.S.”

She likened the Chinese space program as a tortoise compared to the American hare, “though the tortoise has sped up considerably in recent years.”

What is the risk of using the Long March 5B rocket?

By design, the center booster stage of the Long March 5B will push the Wentian module, which is more than 50 feet long, all the way to orbit. That means the booster will also reach orbit.

This differs from most rockets, of which the lower stages typically drop back to Earth immediately after launch. Upper stages that reach orbit usually fire the engine again after releasing their payloads, guiding them toward re-entry over an unoccupied area, like the middle of an ocean.

If the rocket design has not changed, no thrusters will be guiding its descent, and the booster’s engines cannot be restarted.

“It’s going to be the same story,” said Jonathan McDowell, an astrophysicist at the Center for Astrophysics in Cambridge, Mass., who tracks the comings and goings of objects in space. “It’s possible that the rocket designers could have made some minor change to the rocket that would let them then propulsively deorbit the stage. But I don’t expect so.”

The final rain of debris, with a few tons of metal expected to survive all the way to the surface, could occur anywhere along the booster’s path, which travels as far north as 41.5 degrees north latitude and as far south as 41.5 degrees south latitude.

That means there will be no danger to Chicago or Rome, which both lie a bit north of the orbital trajectories, but Los Angeles, New York, Cairo and Sydney, Australia are among the cities that the booster will travel over.

China’s space agencies did not respond to a request for an interview about the upcoming launch.

After the first Long March 5B launch in 2020, the booster re-entered over West Africa, with debris causing damage but no injuries to villages in the nation of Ivory Coast.

The booster from the second launch, in 2021, splashed harmlessly in the Indian Ocean near the Maldives. Still, Bill Nelson, the NASA administrator, issued a statement criticizing the Chinese. “It is clear that China is failing to meet responsible standards regarding their space debris,” he said.

China rejected that criticism with considerable fanfare. Hua Chunying, a senior spokeswoman at the Ministry of Foreign Affairs, accused the United States of “hype.”

“The U.S. and a few other countries have been hyping up the landing of the Chinese rocket debris over the past few days,” Ms. Hua said. “To date, no damage by the landing debris has been reported.”