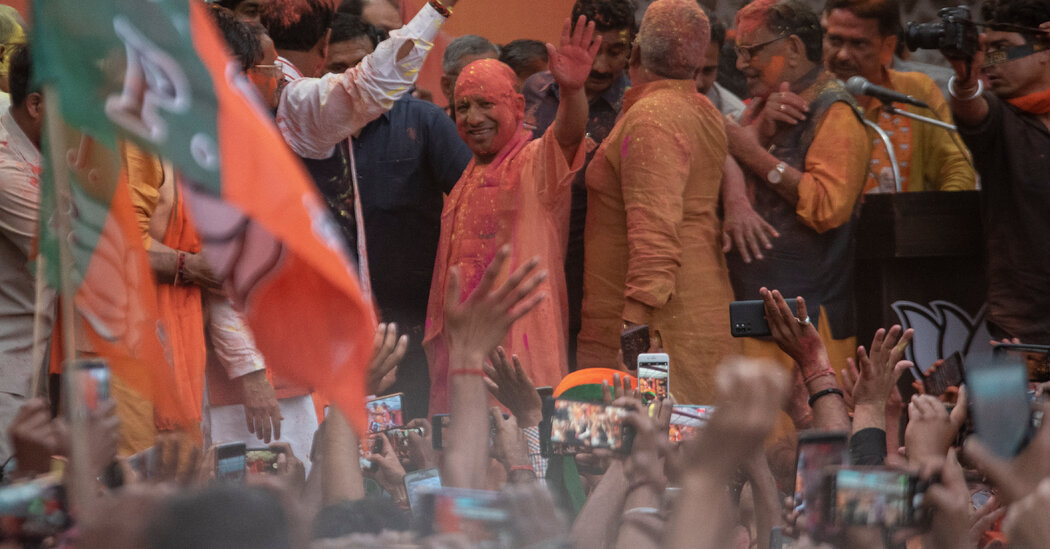 GORAKHPUR, India — The powerful chief minister of India’s most populous state woke up at a Hindu temple, fed cows sweet jaggery cakes, performed a religious ceremony for Lord Shiva, then hit the trail on the last day of his election campaign this month.

This blurring of religion and politics is what some supporters love and some opponents fear most about Chief Minister Yogi Adityanath, the firebrand Hindu monk who won a critical state election and a second term this week in Uttar Pradesh.

His election victory and continued popularity, despite a heavily criticized government response to the coronavirus pandemic and a rise in hate speech and violence against Muslims under his watch, have cemented him as one of the most galvanizing figures in right-wing Hindu politics, and increasingly as an heir apparent to Prime Minister Narendra Modi.

With the opposition in disarray, and with the support of a fervent Hindu base that appreciates his us-or-them appeals, Mr. Adityanath’s election victory is widely being seen as evidence that Mr. Modi’s governing Bharatiya Janata Party has continued to shift the electorate away from the country’s founding secularism.

Despite the country’s growing economic woes and the poor state of public health and schools, Mr. Modi, Mr. Adityanath and the B.J.P. are succeeding in keeping the conversation focused on Hinduism in public affairs, bolstered by popular social welfare programs and a sophisticated mobilization of their supporters. And his election victory is likely to further raise Mr. Adityanath’s increasingly national profile.

Though he came to public attention as the founder of a Hindu youth brigade and was once imprisoned for hate speech against Muslims, Mr. Adityanath has more recently followed Mr. Modi’s lead and somewhat moderated his tone — though without obscuring his Hindu-first message and policies to his right-wing base.

In a TV interview in January, he cast the election in terms of “80 versus 20” — a thinly veiled reference to the rough percentage of Hindus in the state compared with Muslims.

On Twitter, he railed against his political opponents as “worshipers of Jinnah” — a reference to Pakistan’s post-partition founder, Mohammad Ali Jinnah — for whom the predominantly Muslim “Pakistan is dear.” He also posted pictures of a visit to New Delhi, strolling down a marble walkway with Mr. Modi embracing him like a beloved protégé.

Since becoming prime minister in 2014, Mr. Modi has increasingly impassioned and emboldened far-right Hindus. And it is in this climate that Mr. Adityanath, 49, has found the ability to rapidly climb. His popularity largely derives from his ability to speak directly to his fervent base, whether in big public rallies or through his active Twitter account.

“Whoever speaks the truth, people will stand up for him,” said Pinki Patchauri, among a group of women at B.J.P. headquarters in Lucknow on Thursday, cheering for Mr. Adityanath. “Yogi and Modi worked for the people,” she said. “That’s why Yogi is all over the place.”

Indeed, pictures of Mr. Adityanath are plastered across Uttar Pradesh, from towering billboards on highways to the sides of tea shops in villages to the Gorakhnath Math Temple in Gorakhpur, where his political career took root.

One of seven children born to a forest ranger, Mr. Adityanath, born Ajay Singh Bisht, found his vocation in college as an activist in the student wing of the Rashtriya Swayamsevak Sangh, a right-wing Hindu organization.

He became a Hindu priest in 1994, as politics and religion converged across India. Gorakhnath Temple and other temples espousing right-wing Hindu nationalism produced a generation of activists dedicated to the rise of Hindu culture and increasingly focused on demonizing the country’s approximately 200 million Muslims.

Mr. Adityanath won a seat in Parliament for the first time in 1998, becoming India’s youngest member of the national body at the time. From Gorakhpur, he founded the Hindu Yuva Vahini, a hard-liner youth group, delivering an incendiary speech in 2007 after a Hindu boy was killed, calling for his supporters to kill Muslims. He was briefly jailed in Gorakhpur.

Talat Aziz, a former leader of the opposition Samajwadi Party, has accused Mr. Adityanath of leading an attack on her political rally in 1999 during which her bodyguard was shot dead. A court dismissed the charge against Mr. Adityanath in 2019.

“The plant which was planted in 1999 has grown into a massive tree. Now the hatred, the polarization, dominates everything,” Ms. Aziz said.

During his first term as chief minister in Uttar Pradesh, antiterrorism, national security and sedition laws were increasingly used to jail critics and journalists. And the police have cracked down on dissent, fatally shooting nearly two dozen Muslim protesters during a demonstration in 2019 against a citizenship law that is widely seen as discriminatory.

Chandrashekhar Azad Ravan, a constitutional lawyer and a minority rights activist, rose to prominence after leading protests against the citizenship law. He ran an unlikely campaign challenging Mr. Adityanath for the Gorakhpur seat, finishing fourth with less than 8,000 votes.

“He always plays the religion card, and that’s why he wins,” Mr. Ravan said. “He is making a fool of people, and the country is suffering for it.”

Yet voters’ perception that the streets of Uttar Pradesh have become safer, coupled with a bevy of social welfare programs and a clear commitment to Hindutva — a devout Hindu culture and way of life — have proved a winning combination.

Mr. Modi greeted the election victory in Uttar Pradesh as a road map for the 2024 general elections.

“When we formed the government in 2019, experts said it was because of the 2017 victory” in Uttar Pradesh for his B.J.P., he said in a speech Thursday. “I believe the same experts will say that the 2022 election result has decided the fate of the 2024 national elections.”

The B.J.P. won four of five state elections in polls that stretched from the Himalayan state of Uttarakhand in the north to coastal Goa on the Arabian Sea.

“The Hindutva appeal that the B.J.P. has been creating for the last seven years, this is really now come to stay,” said Arati Jerath, a political analyst.

“Its strong Hindu leadership plus soft welfare measures combined really well to give the B.J.P. that sweeping edge over the other parties,” she said.

Mr. Adityanath seems comfortable with being seen as a potential successor to Mr. Modi, who turned 71 in September.

“This is the blessing of 250 million people of Uttar Pradesh,” Mr. Adityanath said at a victory speech at party headquarters in Lucknow, the state capital.

“We accept these blessings, and as per the expectations of common people and with the mantra of together with all, development of all, trust of all and efforts by all, we will carry forward continuously.”

Back in Gorakhpur on the final night of campaigning, the B.J.P. went all-out for Mr. Adityanath with an extravagant procession, including a brass band, a troupe of male dancers wearing bells around their waists and ankles, a truck full of cameras, and boisterous supporters moshing to bass-heavy dance music and snare drums.

From the balcony of a medical practice in downtown Gorakphur, Dr. Sharad Srivastava and his family flung handfuls of marigold and rose petals on Mr. Adityanath, adorned in a saffron turban over his typical saffron robe, giving a regal wave from his perch atop an orange B.J.P. truck festooned with flowers.

“We want to restore this type of nationalism,” Dr. Srivastava said. “We want to regain our heritage. Yogiji is not anti-Muslim. He’s against those who are anti-national.”

The following morning, dozens of people waited at the Gorakhpur temple for a word with the “maharaj,” which means great king, but also refers to Mr. Adityanath’s post as temple president. They stood as he silently strode past with a large entourage of monks in saffron robes and security forces armed with machine guns.