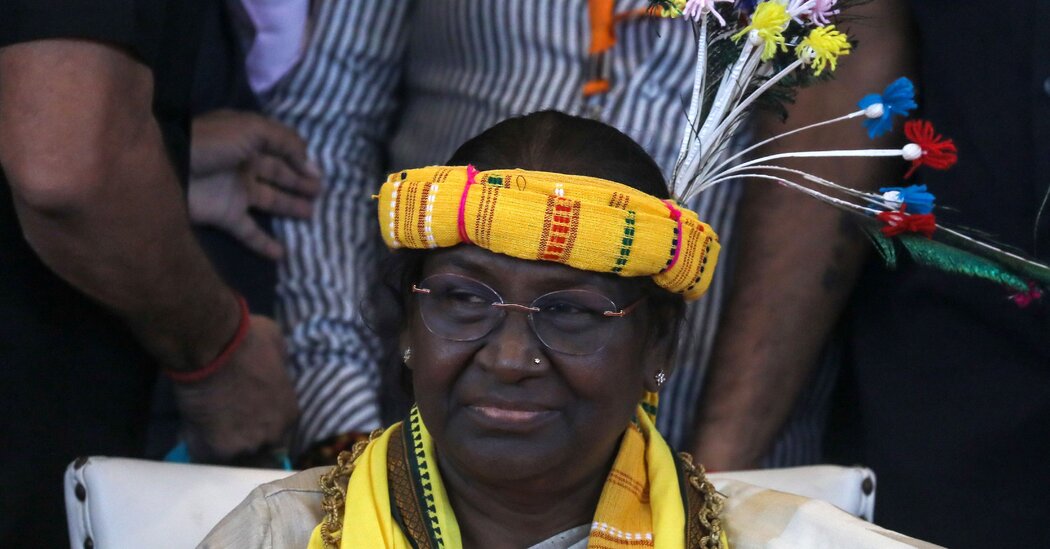 UPARBEDA, India — Many people in the remote eastern village of Uparbeda still cook over firewood. Water is drawn from community hand pumps. And electricity had yet to reach Churamuni Tudu’s home — until last month.

That was when her sister-in-law, Droupadi Murmu, suddenly became the likely next president of India. Soon, news outlets reported that some people in this village, where Ms. Murmu grew up, were still living without electricity. And soon after that, workers were sent to connect Ms. Tudu and other residents to the grid.

“Now I don’t have to walk half an hour to an acquaintance’s to charge my mobile,” said Ms. Tudu, who posed for a photo by the newly installed meter on the wall of her veranda. “My grandchildren can read in the evening time when they come to visit me.”

India’s presidency is largely ceremonial. But when Ms. Murmu, who on Thursday was declared to have been elected to the post by lawmakers, is sworn in next week, it will have significance well beyond Uparbeda.

Besides being only the second female president of India, Ms. Murmu, who until recently was the governor of Jharkhand State, will be the first from the country’s Indigenous tribal communities, an economically marginalized population that makes up nearly 10 percent of India’s population.

Prime Minister Narendra Modi’s governing Bharatiya Janata Party, or B.J.P., which along with its allies nominated Ms. Murmu for the presidency last month, says her new prominence will bring attention to the needs of India’s hundreds of officially recognized tribes, many of whose members live in remote, impoverished villages like Uparbeda.

“Since independence, no one from this diverse tribal community had found representation at this level,” said Samir Mohanty, the B.J.P.’s president for Odisha State, which includes Uparbeda.

Others see the party’s choice of Ms. Murmu as a calculated play for votes. The B.J.P., a Hindu nationalist party, has been trying for years to make inroads with tribal voters in states like Odisha, where they make up nearly a quarter of the population.

“For the last eight to 10 years, the new packaging of the B.J.P. has been going on, that it is a party of the lower castes, the marginalized and the tribals, an idea they want to promote,” said Harish Wankhede, a professor of political studies at Jawahar Lal Nehru University in Delhi who specializes in identity politics.

Ms. Murmu, 64, is a member of one of India’s oldest and largest tribes, the Santhals, who are famous for an uprising against British rule in the 1850s. She was born to a rice farmer who was a member of Uparbeda’s village council; as a child, she walked a kilometer to school each day and studied at night by kerosene lamp.

She started out as a teacher and soon went into local politics, joining the B.J.P. and eventually serving in Odisha’s state legislature. In 2015, the party nominated her for governorship of Jharkhand, a neighboring state that also has a substantial tribal population. She held the office until last year.

Ms. Murmu has a reputation for being soft-spoken and unassuming. She told an interviewer in 2016 that she had not originally intended to seek public office.

“At the time, politics was not looked at with a good point of view,” she said. “Especially for women. Because the society I belong to, they think that women should not step into politics.”

As India’s 15th president, Ms. Murmu will essentially be a figurehead. India’s first prime minister, Jawaharlal Nehru, once said the presidency was designed to carry “great authority and dignity” but no “real power.” But over the years, presidents have used their influence to resolve various political crises and have criticized governments over policies they disapproved of.

For the B.J.P., political analysts say, giving Ms. Murmu the presidency is a way to increase its appeal to women as well as send the broader message that it cares about the disadvantaged. But they say it is also part of an effort to make gains in states with large tribal populations. Voters from India’s tribes and its lower castes have tended to support the Congress party, which is now in the opposition, or regional parties with strong local leaders.

Salkhan Murmu, a former B.J.P. lawmaker and a community activist, said the rise of Ms. Murmu was a “huge, huge deal” for Santhals and other tribes. Mr. Murmu, who is not related to the incoming president, has been lobbying for tribal religious practices to be formally recognized in India’s census.

“B.J.P. wants to extend its political base, and we want recognition of our culture and tradition,” he said. “Let them win politically, and let us win culturally and traditionally, so that we can keep our distinct languages and way of life alive.”

The drive to Uparbeda from Odisha’s capital, Bhubaneswar, takes close to eight hours, meandering through lush green forests, farmlands and forest reserves, even onto designated paths for elephants. Finally it opens onto a picturesque landscape of paddy fields, with mountains looming in the background.

Miles ahead of the village, people enthusiastically pointed the way to it. Ms. Murmu’s nomination was major news in the area. In Uparbeda, villagers formed a circle around trees they considered sacred and prayed for her victory.

“We are getting ready to dance to the tune of the drums,” Bhakta Bandhu Tudu, a cousin of Ms. Murmu’s, said by telephone on Thursday before the lawmakers’ votes were counted.

On a recent afternoon, Uparbeda men were hunched in ankle-deep water, tending to their paddy fields. Women rode bicycles to the local market. The village, whose population is about 1,600, has three schools and a primary health care center. For more serious ailments, people travel to the nearest town, 12 miles away.

Ms. Tudu, a widow whose husband was Ms. Murmu’s brother, grows rice in a small field and draws her water from the community pump. She said it was “liberating” to have electricity in her home, though some of the rooms had yet to be connected.

Ms. Tudu was thrilled by her sister-in-law’s ascent. “It fills my heart with joy,” she said. A cousin sitting nearby, Heera Murmu, was more pragmatic.

“Our wish list includes clean tap water, a hospital and a better school for the children from our new president,” she said.