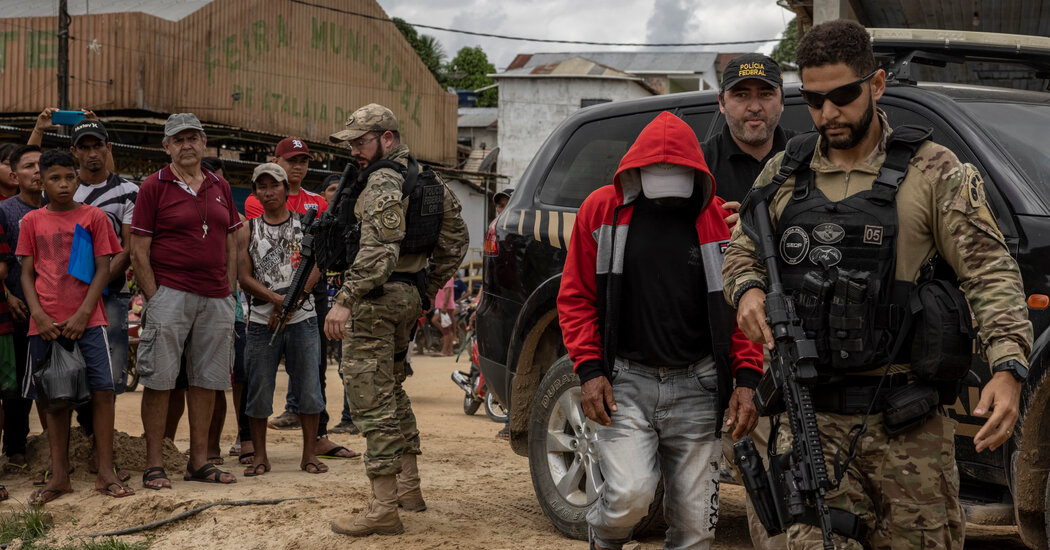 TABATINGA, Brazil — A fisherman confessed to killing a British journalist and a Brazilian expert on Indigenous peoples deep in the Amazon and then showed authorities where he had hid their bodies, the Brazilian federal police said Wednesday. It was a grim breakthrough in the 10-day search for the missing men that has transfixed Brazil and provoked international outrage.

The police said they found human remains buried about two miles into the rainforest and were now working to identify them. They expect them to be the bodies of Dom Phillips, a freelance reporter for The Guardian, and Bruno Araújo Pereira, a former government official who worked in the area to combat illegal fishing and mining.

The Brazilian federal police had arrested two brothers, Amarildo and Oseney da Costa de Oliveira, in connection to the men’s disappearance. On Wednesday, they said that Amarildo had confessed and that they were seeking an additional suspect. They have not yet charged the men.

The disappearances are a particularly dark chapter in the recent bloody history of the Amazon. Mr. Phillips had dedicated much of his career to telling the stories of the conflict that has ravaged the rainforest, while Mr. Pereira spent years trying to protect the Indigenous tribes and the environment amid that strife. It now appears that work turned deadly for them, signaling the lengths that people will go to illegally exploit the rainforest.

“This tragic outcome puts an end to the anguish of not knowing Dom and Bruno’s whereabouts,” Alessandra Sampaio, Mr. Phillips’s wife, said in a statement. “Today, we also begin our quest for justice.”

Mr. Phillips had gone to the Javari Valley Indigenous reservation to interview Indigenous patrol teams that have cracked down on illegal fishing and hunting there. Mr. Pereira helped create those patrols in response to the increasing absence of a government presence in the area under the administration of President Jair Bolsonaro. Mr. Phillips was working on a book during the trip, and the two men were headed home when they vanished.

Witnesses saw the de Oliveira brothers in a boat behind Mr. Phillips and Mr. Pereira just before they were last seen, according to investigative documents from the Brazilian federal police viewed by The New York Times.

Mr. Pereira’s work with the patrols had drawn him threats from illegal fishermen and hunters, including from Amarildo da Costa de Oliveira, according to the documents. Univaja, a local association of Indigenous groups that helped organize the patrols, said Amarildo also showed a gun to a group that included Mr. Pereira and Mr. Phillips the day before they disappeared.

“For me, he’s not related to this. God will free him,” Francisco Conceição de Freitas, the brothers’ stepfather, said of Amarildo in an interview on Wednesday. The Times was unable to reach the de Oliveira brothers’ attorney.

Brazil has faced mounting international pressure to step up its response to the disappearance of the two men. In the days after they went missing, politicians, Indigenous groups and journalists criticized the government for moving too slowly to mobilize search teams, prompting Mr. Bolsonaro to defend their efforts in front of other world leaders at an international summit in Los Angeles.

On Wednesday, in an exchange in Britain’s Parliament, Theresa May, the former prime minister, asked the government to make “this case a diplomatic priority” and to “do everything it can to ensure that the Brazilian authorities put the resources necessary to uncover the truth and find out what has happened to Dom and Bruno.”

Mr. Phillips and Mr. Pereira went missing in the Javari Valley, an Indigenous reservation that is roughly the size of Maine and is believed to be home to at least 19 Indigenous groups that have little contact with outsiders. The area is also plagued by illegal fishing, hunting and mining. Such illegal activity has surged under Mr. Bolsonaro, who has encouraged the development of the Amazon and cut the budgets of the agencies tasked with protecting it.

There was an anonymous note that threatened Mr. Pereira by name, as well as a violent confrontation with Mr. Pereira’s colleagues in the main plaza of a nearby town, according to complaints filed with local authorities by Univaja.

Then, at about 6 a.m. on June 4, Mr. Phillips and Mr. Pereira were with an Indigenous patrol when a boat with three men known to be illegal fishermen passed and showed that they were armed, Univaja officials said. One of the men was Amarildo da Costa de Oliveira, Univaja said.

The following morning, Mr. Phillips and Mr. Pereira began their journey home, traveling on the Itaquaí River in a new boat with a 40-horsepower engine and enough fuel for the trip. They disappeared along the route.

The police said Wednesday that the de Oliveira brothers sank that boat using bags of soil near the location where they had buried the bodies.

Mr. Phillips was a seasoned correspondent who had reported from Brazil for 15 years, including a period as a freelance writer for The Times in 2017. His specialty was deep stories about vulnerable groups in hard-to-reach places in the Amazon, making him particularly experienced with the sort of journey that became his last.

On Wednesday, Mr. Bolsonaro said Mr. Phillips was disliked in that part of the Amazon because of his reporting on illegal activities, and suggested it was “foolish” to go to the region unarmed.

“He should have been extra careful and he decided to go on an excursion,” Mr. Bolsonaro said. “We don’t know if someone saw him and went after him; there are pirates on the river, there’s everything you can imagine there.”

Late Wednesday, the authorities returned from their search for the bodies to Atalaia do Norte, a nearby city, and unloaded four heavy black bags from their boat.