Most Americans say Biden is ‘not tough enough’ on Russia, a new poll finds. 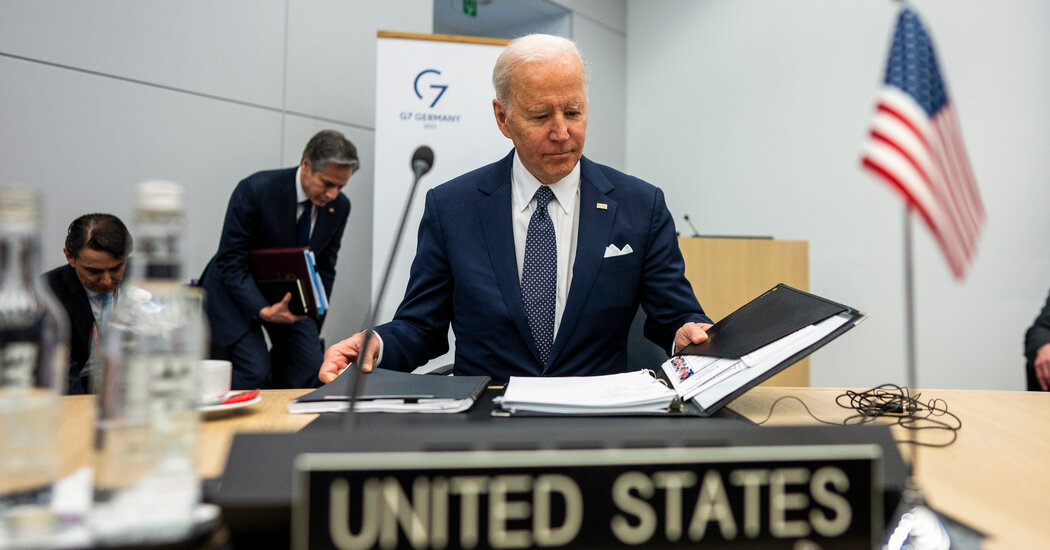 Most Americans say Biden is ‘not tough enough’ on Russia, a new poll finds.

President Biden faces intensifying pressure at home four weeks into the war, with a solid majority of Americans expressing doubt that he has done enough to punish Russia for its invasion of Ukraine, according to a poll by The Associated Press and NORC released Thursday.

Some 56 percent of Americans — and 43 percent of Democrats — said Mr. Biden, who was meeting on Thursday with European leaders, had not been “tough enough” in his response. About one-third said his handling the crisis was “just right,” according to the poll, which surveyed 1,082 U.S. adults between last Thursday and Monday, more than three weeks into the war.

Just 6 percent of Americans, barely more than the poll’s 4 percent margin of error, thought Mr. Biden has been “too tough” on Moscow.

The survey reflected a rapid swing of public opinion — from a decade-long national aversion to conflict to a far more aggressive position, spurred by images of indiscriminate Russian attacks on civilians. Support for a major U.S. role in Ukraine has grown to 40 percent, from 26 percent just before Russia’s invasion in February.

That sudden shift puts added pressure on Mr. Biden, who is in Brussels huddling with European allies. Mr. Biden has tried to chart a middle course between punishing Russia’s president, Vladimir V. Putin, and provoking a direct military confrontation that could start a war between two nuclear superpowers.

The poll also reflected the hyperpartisan stasis of American politics. Mr. Biden’s overall approval rating remains mired at 43 percent, virtually unchanged since the war began, with Republicans overwhelmingly rejecting his presidency and disapproving of his actions on Ukraine.

Democrats are also uneasy. Rachel Collins, 41, a schoolteacher from Chicago, summed the sense of agitation and anger that Mr. Putin’s actions have spurred among her fellow Democrats, who opposed President George W. Bush’s invasion of Iraq.

“I understand he’s between a rock and a hard place,” Ms. Collins told the pollsters, speaking of Mr. Biden’s dilemma. “It just feels like Putin’s not going to stop at Ukraine.” And that, she said, made her believe that a direct confrontation with Russia was “inevitable.”

Republicans, reflecting a near-universal disdain for Mr. Biden among the party’s rank-and-file, were reluctant to support military action — yet also convinced the president was not “tough enough” to deter Mr. Putin. Only 12 percent of Republicans approved of Mr. Biden’s actions, the poll found.

But there was one area of agreement across party lines. Strong majorities in both parties approved of Mr. Biden’s efforts to marshal international support for crippling economic sanctions against Mr. Putin and his allies, with 70 percent of Americans backing a total U.S. ban on oil imports from Russia.