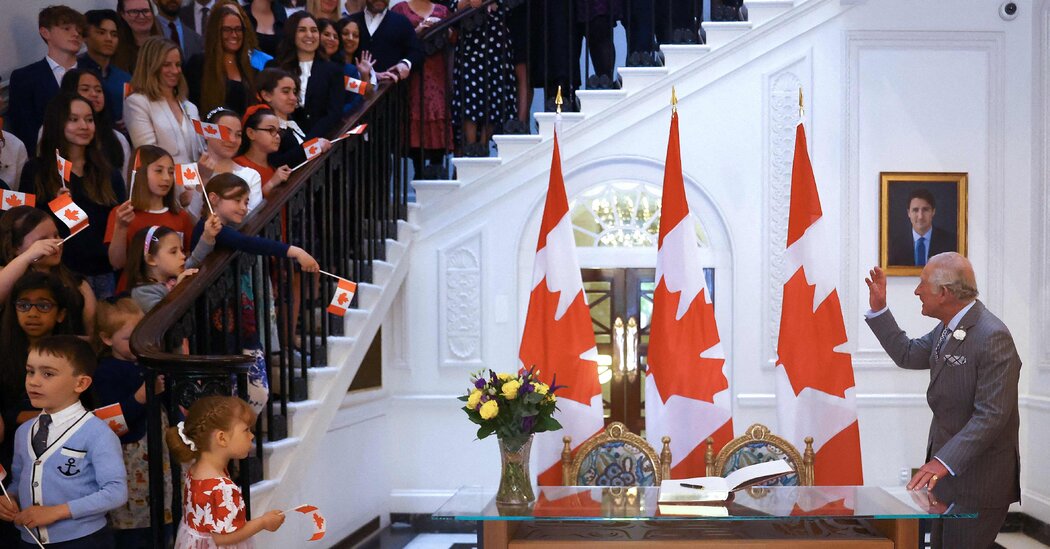 OTTAWA — No one will likely raise it in his presence, but when Prince Charles arrives in Canada on Tuesday for a three-day visit to mark the 70th anniversary of his mother’s ascent to the throne, one question will loom over the trip: Will Canadians accept him as their king?

Without amending Canada’s Constitution, Charles will automatically succeed Queen Elizabeth II as Canada’s head of state just like every British monarch since the nation’s founding. Poll after poll shows that the 96-year-old queen who has battled some recent health issues is widely respected by Canadians.

For the past several years, however, an ever-declining number of Canadians, polls show, want to swear allegiance to another British monarch, particularly Charles, who is disliked by many here and who represents an institution that many see as increasingly irrelevant to their lives.

Much less clear, however, is what Canadians might do to prevent the rule of King Charles III.

“Both sides in Canada are a bit at a truce,” said Philippe Lagassé, an associate professor at Carleton University and an expert on the role of the monarchy in Canada. “The monarchists get to keep the formal legal situation, they get the occasional royal tour and they get some symbolism. But the republicans are able to say that the monarchical principle doesn’t really animate Canadian life in any significant way.”

The visit by Charles and his wife Camilla, which comes a year after the remains of hundreds of children were identified as buried on the grounds of a former residential school for Indigenous children in British Columbia, has something of an Indigenous theme.

They will attend a reconciliation event in the province of Newfoundland, their first stop on the trip, and visit an Indigenous First Nation near Yellowknife in the Northwest Territories on the final day. In between, the royal couple will be in Ottawa, the capital.

The trip will also feature climate related discussions between Charles and business leaders as well as a visit to an ice road to discuss the effects of climate change in the far north.

Perhaps the only mystery surrounding the visit is if handshaking, traditionally the major activity of Royal Tours, will be replaced by a more Covid safe form of greeting.

Late last month, a poll released by the Angus Reid Institute, a nonprofit public opinion research group, indicated that 55 percent of Canadians found the monarchy irrelevant and another 24 percent said it was becoming less relevant. A resounding 67 percent of Canadians who were questioned said they opposed the idea of Charles succeeding his mother.

Large and enthusiastic crowds greeted Charles when he visited Canada with Diana, his first wife, three times. But public interest in him swiftly declined following their separation in the 1992.

His sometimes patronizing manner does not work well in a country that values egalitarianism. The relationship between Charles’s brother Andrew and the convicted sex offender Jeffrey Epstein, who hanged himself in a Manhattan jail, have further eroded support among Canadian for the monarchy.

Their standing was further damaged after Meghan Markle, Charles’s daughter-in-law who lived in Toronto and British Columbia, said in an interview that she was subjected to racially insensitive comments by royals

Still, Charles and Camilla are likely to draw crowds, particularly in St. John’s, Newfoundland, where their visit will be the dominant talk of the town.

Geography plays a role in how the royals are viewed. In modern times, the monarchy has never enjoyed any significant support in largely French speaking Quebec, the second most populous province.

And Canada’s changing demographics have contributed to the spread of that sentiment elsewhere.

Many immigrants to Canada come from countries like China, giving them no real connection to Britain’s monarchy. Or they have roots in countries like India where the crown is still viewed by many as a symbol of occupation and repression.

“There may well be a point at which Canadians say: ‘Huh, who’s this dude on my money?’” said Shachi Kurl, the president of Angus Reid.

The lingering level of support for the monarchy is thanks to, in large part, respect for the queen, Ms. Kurl said, and is probably destined to fall even further following her death.

The Abuse of Indigenous Children in Canada and the U.S.

“The lack of motivation around making a change really has to do with a genuine affection for her as much as anything,” she said.

Barbados dropped the queen as its head of state and became a republic last November in a ceremony witnessed by Prince Charles and Rihanna. Six other Caribbean nations may follow suit.

Separate tours of the Caribbean this year by Prince Edward, Charles’s brother, and Prince William, the future king’s son, were the subject of protests against the monarchy and Britain’s brutal history with slavery. The protests forced the cancellation of some stops.

Rather than worrying about protests, the organizers of Charles’s trip to Canada seem to have made efforts to ensure that he simply has an audience. Aside from a wreath-laying ceremony at the National War Memorial in Ottawa, there are no real opportunities for crowds in major cities to gather.

Instead, he will visit Quidi Vidi, a neighborhood and fishing village in St. John’s, Newfoundland, a city with a population of 114,000 people, where an appearance by any international celebrity, popular or not, is bound to be a major event.

The system for amending Canada’s Constitution to remove the British monarch as head of state makes such a step extremely difficult, according to Professor Lagassé and Ms. Kurl. Replacing the British monarch with a Canadian head of state would require the unanimous consent of the federal government and all 10 provinces. In a country where politics are driven by regionalism, attaining that consent might be impossible.

“Any talk of constitutional change is political kryptonite to most politicians,” Ms. Kurl said. “They would prefer not to go there and just look at their shoes.”

One workaround, Professor Lagassé said, might be to accelerate a long running process of simply diminishing the monarch’s presence in Canada. He said that since 1947 the Queen’s powers, which are mostly symbolic, have been assigned to the governor general, her official representative in Canada.

There are, Professor Lagassé said, a number of steps the Canadian government can take without legislation, let alone meddling with the constitution.

The queen once appeared on all of Canada’s bank notes. Removing her from the last remaining one, the 20 dollar bill, poses no legal issue, he said, nor would replacing the royal effigy on coins. No law requires the monarch’s portrait to hang in government offices or, for that matter, mandates royal tours.

“There’s a whole bunch of these things, the soft underbelly of monarchical symbolism, that can be altered,” Professor Lagassé said. “The general approach now in Canada is that the monarchy is there, it’s not broken. Don’t deal with it, but also don’t give it any more room than it actually needs.”