No More ‘Have a Nice Day’: Lviv Learns to Live With War 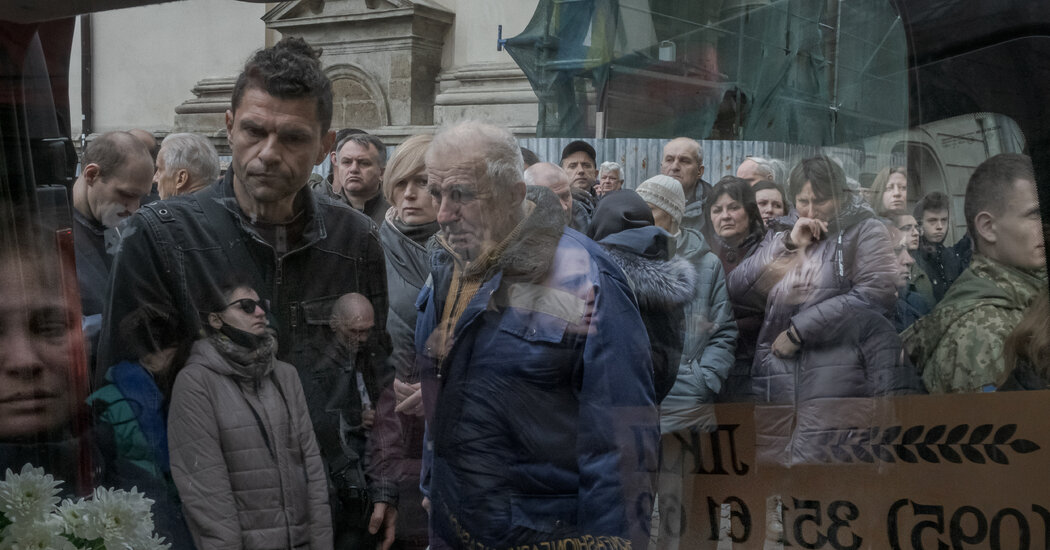 No More ‘Have a Nice Day’: Lviv Learns to Live With War

LVIV, Ukraine — When war came to Ukraine in February, Helen Polishchuk made some adjustments in the six-story bar she manages in central Lviv.

The Mad Bars House in Lviv’s historic central square stayed open, but served coffee and hot food instead of alcoholic drinks. They turned off the rock music. And as displaced Ukrainians began pouring into the city from places devastated by Russian attacks hundreds of miles away, she had instructions for the wait staff.

“When guests leave the restaurant we normally say, ‘Have a nice day,’” she said. Instead she told them they could say something else, like “Glory to Ukraine,” or “We wish you blue skies.”

“Because to say ‘have a nice day’ in this period is stupid,” said Ms. Polishchuk, 33.

Before the Russian invasion of Ukraine at the end of February, Lviv, a historic city just 40 miles from Poland, was a popular European tourist destination, with 2.5 million visitors a year and the biggest jazz festival in Eastern Europe.

Now, instead of tourists, there are displaced Ukrainians fleeing the war-torn east of the country. Lviv and its residents are learning to live with what most now believe will be many months of conflict, if not years.

Several Russian airstrikes have targeted infrastructure here, including a rocket attack on a military training base last month that killed more than 30 people. Air-raid sirens warning of Russian fighter jets breaching the airspace sound several times a day. This small city, though, is still far from the active fighting that has devastated entire cities in the east of Ukraine.

The main challenge for Lviv has been to survive a wartime economy and manage the flood of displaced, traumatized people who are swelling the city’s population.

“We have learned to live in wartime,” said the city’s mayor, Andriy Sadovyi, who has recently lifted some municipal restrictions, including allowing bars and restaurants to sell wine and beer, although not hard alcohol.

Mr. Sadovyi, a former businessman, said that six months before the Russian invasion, he tasked city officials with finding a way to keep water supplies flowing if the electricity failed. They started buying diesel generators, as well as stockpiling medical supplies, and topping up blood banks.

“If I had not been bracing my city for this situation, we would be in a catastrophe right now,” Mr. Sadovyi, dressed in a black hoodie and black sneakers, said in an interview in the 19th-century Viennese-style City Hall. His office’s expansive stone balcony overlooked the market square, where displaced children shrieked with laughter and chased giant soap bubbles blown by a street performer.

Mr. Sadovyi said that civilians fleeing the fighting started coming into Lviv within hours of the invasion — 60,000 of them per day for the first three weeks. Now, with a new Russian advance expected, about 10,000 a day are arriving.

While many are heading across the border to Poland and other European countries, about 200,000 have remained, double the number the city administration was expecting and almost one third the city’s prewar population of 700,000.

Those with money are renting apartments or staying in hotels. But tens of thousands more are in shelters, dependent on aid. The Polish government has donated container homes for 1,000 people that are being set up in a city park. Others are being channeled from Lviv to other communities in Western Ukraine.

“This is a huge strain on our city,” said Mr. Sadovyi, 53. “Basically we have another city within our city.”

The war has sparked remarkable patriotism, and if some local residents note that they can no longer find tables at their favorite cafes or restaurants because they are filled with displaced people, they tend not to complain. Guides lead displaced families on free tours of the city. Passengers on the tourist trolley leaving City Hall are not foreigners these days but Ukrainians.

It makes for an odd juxtaposition. A significant number of the soldiers dying at the front are from Western Ukraine, and there are regular funerals in churches in the city center. On a recent day, the sobbing relatives of a steelworker and his factory colleagues stood outside a cathedral with wreathes of flowers.

Around the edges, longtime residents are trying to preserve some semblance of prewar life.

The Lviv National Opera recently resumed limited events, with snippets of ballet and choir performances. The number of tickets sold is limited to the capacity of the building’s bomb shelter, about 250 people. At the first performance, an air-raid siren sounded, sending audience members and dancers down to the shelter before resuming the show.

Russia prepares renewed offensive. Ukraine is bracing for a Russian assault along its eastern front, where Ukrainian officials have warned civilians still living in the region that time is running out to escape. But the road to safety is fraught with peril, with reports of Ukrainian civilians being killed as they try to flee.

More evidence of atrocities. Officials continued to document and expose atrocities committed by Russian forces around Kyiv, in what a growing number of Western officials claim are war crimes. Times reporters and photographers went to Bucha to uncover new details of the execution-style killings of civilians.

On the diplomatic front. Karl Nehammer, the Austrian chancellor, visited President Vladimir V. Putin, becoming the first Western leader to meet with him in person since the start of the invasion. Mr. Nehammer said he came away from the meeting fearing that Mr. Putin intended to drastically intensify the brutality of the war.

“We reopened because we received so many calls and emails from people,” said Ostap Hromysh, the opera’s international relations manager. The messages were apologetic, saying “of course we understand there is a war,” but asking if they had performances anyway.

“If people day by day are faced with sad news about death, about blood, about bombs, they need to feel other emotions,” he said.

At the Mad Bars House, Ms. Polishchuk said they planned to open a rooftop terrace next week, perhaps with nonalcoholic cocktails as well as wine and beer. They are bringing back more of their original 111-person staff.

She said the bar, which in normal times has a dance floor and serves increasingly potent drinks as patrons ascend its six stories, is losing money, but is committed to remaining open. On Sunday afternoon, the first and second floors of the bar were full.

The management has replaced the classic rock entertaining beer drinkers at the ground-floor bar before the war with Ukrainian songs, though on the floor serving wine to customers at tables, Frank Sinatra croons.

“We don’t want to pretend that nothing has happened, we understand that it’s a war,” Ms. Polishchuk said. “But we want to create an atmosphere of somewhere safe.”

On the menu, borscht, the beet soup that had few takers before the war, is now the biggest seller. Ms. Polishchuk said it was patriotism and stress. “We understand that people want comfort foods,” she said.

“Have a nice day” is not the only thing that feels off these days.

“This is not the time for carrot juice and green salads,” Ms. Polishchuk said.