‘No Wavering’: After Turning to Putin, Xi Faces Hard Wartime Choices for China 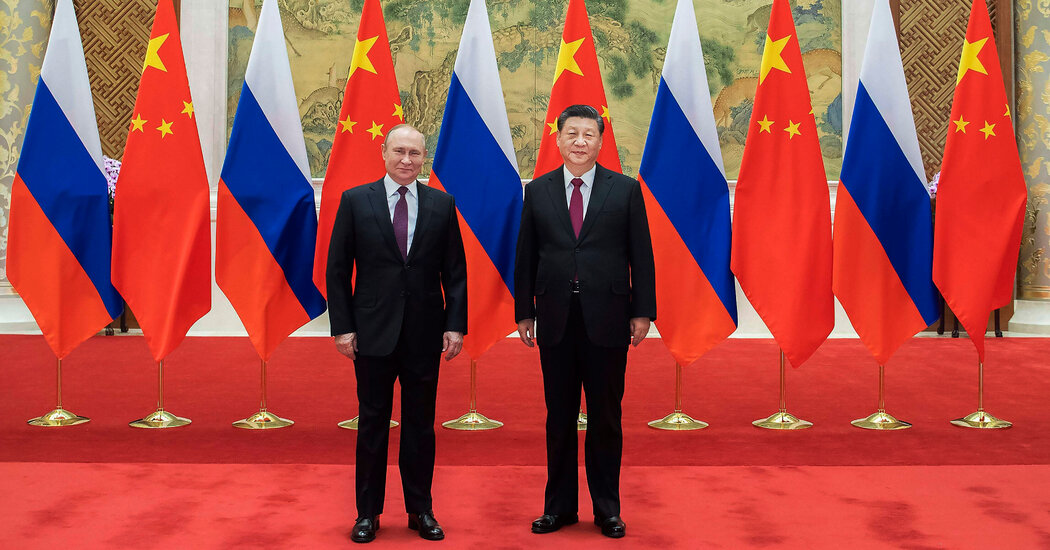 ‘No Wavering’: After Turning to Putin, Xi Faces Hard Wartime Choices for China

On a frigid day in Beijing last month as the Winter Olympics were set to open, China’s leader, Xi Jinping, celebrated a diplomatic triumph with a banquet for his honored guest, President Vladimir V. Putin of Russia. They had just finalized a statement declaring their vision of a new international order with Moscow and Beijing at its core, untethered from American power.

Over dinner, according to China’s official readout, they discussed “major hot-spot issues of mutual concern.”

The details remain secret, but their talks were a crucial moment in the events that culminated 20 days later with Russia’s invasion of Ukraine, unleashing Europe’s worst war in decades and seismic jolts in global power likely to be felt for decades.

Publicly, Mr. Xi and Mr. Putin had vowed that their countries’ friendship had “no limits.” The Chinese leader also declared that there would be “no wavering” in their partnership, and he added his weight to Mr. Putin’s accusations of Western betrayal in Europe.

Now it appears that Mr. Xi’s display of solidarity may have, possibly unwittingly, emboldened Mr. Putin to gamble on going to war to bring Ukraine to heel.

A retracing of Beijing’s trail of decisions shows how Mr. Xi’s deep investment in a personal bond with Mr. Putin has limited China’s options and forced it into policy contortions.

Before and shortly after the invasion, Beijing sounded sympathetic to Moscow’s security demands, mocking Western warnings of war and accusing the United States of goading Russia. Over the past two weeks, though, China has sought to edge slightly away from Russia. It has softened its tone, expressing grief over civilian casualties. It has cast itself as an impartial party, calling for peace talks and for the war to stop as soon as possible.

The quandaries for China, and Mr. Xi, remain.

“He’s damned if he did know, and damned if he didn’t,” Paul Haenle, a former director for China on the National Security Council, said of whether Mr. Xi’s had been aware of Russia’s plans to invade. “If he did know and he didn’t tell people, he’s complicit; if he wasn’t told by Putin, it’s an affront.”

A Western intelligence report concluded that Chinese officials told their Russian counterparts in early February not to invade Ukraine before the end of the Winter Olympics in Beijing, though it was not clear whether Mr. Putin told Mr. Xi directly of any plans. Chinese officials rejected the claim that Beijing had forewarning as “pure fake news.”

In any case, the invasion evidently surprised many in Beijing’s establishment, leaving officials scrambling to respond and to evacuate Chinese nationals. Even if Mr. Xi knew anything about Mr. Putin’s plan, some experts said, he perhaps expected Moscow to limit its actions to the regions in Ukraine adjoining Russia.

“They did not anticipate a full-scale invasion,” said Yun Sun, the director of the China Program at the Stimson Center, who has studied Beijing’s actions in the lead-up to the war. “You do not need to invade Ukraine to get what you want. So why bother?” she said, summarizing what she described as a broad view among Chinese officials.

The implications for China extend beyond Ukraine, and even Europe.

Mr. Xi’s warm embrace of Mr. Putin only a month ago advertised their ambitions to build what they call a fairer, more stable global order — one in which the United States is a lesser presence. Instead, their summit was followed by the kind of reckless, unilateral military intervention in an independent state that China has long denounced.

Mr. Xi’s statement with Mr. Putin on Feb. 4 endorsed a Russian security proposal that would exclude Ukraine from joining the North Atlantic Treaty Organization. By opposing the expansion of NATO, China waded into tensions over how far Russia’s eastern European neighbors could forge alliances with the West.

“Putin may have done this anyway, but also it was unquestionably an enabling backdrop that was provided by the joint statement, the visit and Xi’s association with all of these things,” said Andrew Small, a senior fellow with the German Marshall Fund in Berlin.

The blot on Mr. Xi’s image as a statesman has come as he seeks an untroubled march to a Communist Party congress this year, where he is likely to win a groundbreaking third term as party leader.

“He owns that relationship with Putin,” Mr. Haenle said. “If you’re suggesting in the Chinese system right now that it was not smart to get that close to Russia, you’re in effect criticizing the leader.”

Mr. Putin’s war has already dragged China to a place it did not aim to be. For decades it sought to build ties with Russia while also keeping Ukraine close.

In 1992, China was among the first countries to establish ties with a newly independent Ukraine after the collapse of the Soviet Union. It turned to Ukraine as a major supplier of corn, sunflower and rapeseed oil, as well as arms technology.

Over the past years, as growing numbers of Ukrainians supported joining NATO, Chinese diplomats did not raise objections with Kyiv, said Sergiy Gerasymchuk, an analyst with Ukrainian Prism, a foreign policy research organization in Kyiv.

Ukraine was “trying to sit on the fence and avoid any sensitive issues with Beijing, and expected the same from China,” he said.

As opinion against China hardened in many countries, Mr. Xi became preoccupied with defending his nation against what he saw as threats to its rise, especially from the United States.

Relations were showing no signs of lasting improvement under the Biden administration, so Mr. Xi moved to bolster ties with Mr. Putin to blunt American policies.

The two leaders shared similar world views. Both lamented the collapse of the Soviet Union. Both saw Washington as a prime instigator of any political opposition to their rule. For both leaders, their partnership was an answer to Mr. Biden’s effort to forge an “alliance of democracies.”

At a video summit in December, Mr. Xi told Mr. Putin that “in its closeness and effectiveness, this relationship even exceeds an alliance,” a Kremlin aide told reporters in Moscow at the time.

Yet Mr. Xi remains a more cautious leader than Mr. Putin, and he appeared hopeful that China would not be forced to choose between Russia and Ukraine.

Only a month before his Olympic summit with Mr. Putin, the Chinese leader hailed 30 years of diplomatic ties with Ukraine. “I attach high importance to developing the Chinese-Ukrainian strategic partnership,” Mr. Xi said in a Jan. 4 message to Ukraine’s president, Volodymyr Zelensky.

Beijing had its own complaints with NATO, rooted in the bombing of the Chinese Embassy in Belgrade, Serbia, during NATO’s war in 1999 to protect a breakaway region, Kosovo. Those suspicions deepened when NATO in 2021 began to describe China as an emerging challenge to the alliance.

They also scoffed at Western intelligence warnings about Russia’s imminent invasion. Washington, not Moscow, was the warmonger, they suggested, pointing to America’s invasion of Iraq in 2003. On Feb. 23, a foreign ministry spokeswoman, Hua Chunying, accused Washington of “manufacturing panic.”

The next day, Russian forces struck.

While governments across the world condemned Mr. Putin, Beijing directed its criticism at the United States and its allies. It even avoided calling Mr. Putin’s actions an invasion.

In recent days, though, Beijing’s language has begun to shift, reflecting a desire to avoid standing too close to Mr. Putin.

Chinese officials tweaked their calls to heed Russia’s security, stressing that “any country’s legitimate security concerns should be respected.” They still did not use the word “invasion,” but have acknowledged a “conflict between Ukraine and Russia.”

China has also sought to position itself as a potential mediator, though so far only in vague terms. Mr. Wang, the Chinese foreign minister, told reporters on Monday that Beijing was willing to “play a constructive role” in bringing about peace talks.

China’s efforts to distance itself from Russia have come too late, said Mr. Gerasymchuk, the analyst in Kyiv. He said China would wait to see who prevailed in the war and seek to improve relations with the winner.

“Many decision makers in China began to perceive relations in black and white: either you are a Chinese ally or an American one,” said Mr. Gerasymchuk, who has been spending nights in a bomb shelter. “They still want to remain sort of neutral, but they bitterly failed.”