Painful Stories Emerge From Mariupol, While Combat Rages to the East 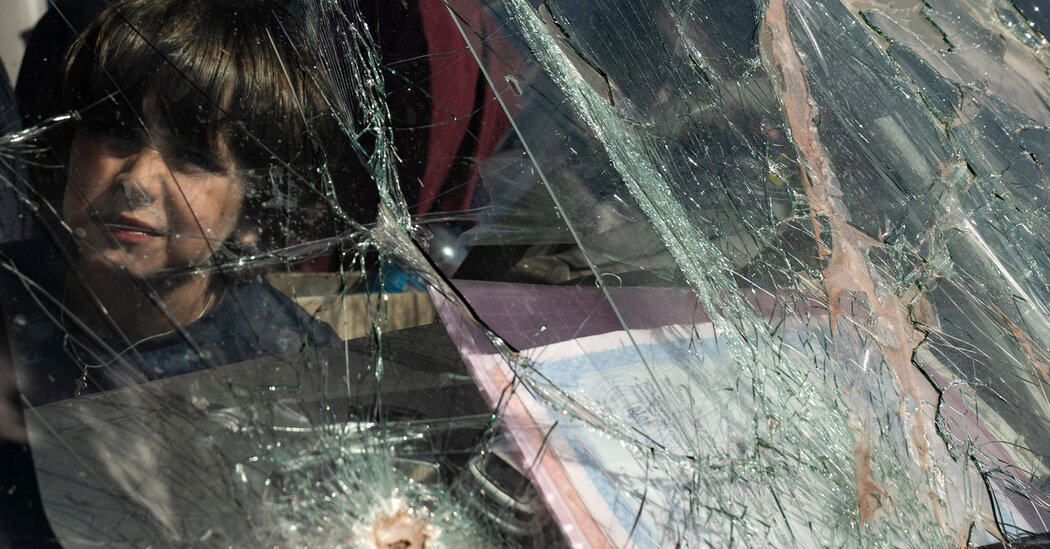 Painful Stories Emerge From Mariupol, While Combat Rages to the East

ZAPORIZHZHIA, Ukraine — Ukrainian civilians evacuated from the ruined city of Mariupol carried with them fresh accounts of survival and terror on Monday as Western nations worked to turn their increasingly expansive promises of aid into action, preparing billions of dollars in military and economic assistance, an oil embargo and other once-unthinkable steps.

Despite early-morning shelling, the halting evacuation, overseen by the Red Cross and the United Nations, was seen as the best and possibly last hope for hundreds of civilians who have been trapped for weeks in bunkers beneath the wreckage of the Azovstal steel plant, and an unknown number who are scattered around the ruins of the mostly abandoned city.

Those who had been trapped in Mariupol outside the steel mill described a fragile existence, subsisting on Russian rations cooked outside on wood fires amid daily shelling that left corpses lying in debris.

Yelena Gibert, a psychologist who reached Ukrainian-held territory with her teenage son on Monday, described “hopelessness and despair” in Mariupol, and said residents were “starting to talk of suicide because they’re stuck in this situation.”

Heavy fighting in the eastern Donetsk and Luhansk regions has yielded minimal gains for the forces of President Vladimir V. Putin of Russia, Western officials say. But the Russians continued to fire rockets and shells at Ukrainian military positions, cities, towns and infrastructure along a 300-mile-long front, including bombarding the Azovstal plant, where the last remaining Ukrainian fighters in Mariupol are hunkered down.

On Monday, Ukraine said it had used Turkish-made drones to destroy two Russian patrol vessels off the Black Sea port of Odesa, just before Russian missiles struck the city, causing an unknown number of casualties and damage to a religious building.

The U.S. State Department said that Russia’s war aims now include annexing Donetsk and Luhansk — partially controlled before the Feb. 24 invasion by Russia-backed separatists — as soon as mid-May, and possibly the southern Kherson region as well.

“We believe that the Kremlin may try to hold sham referenda to try to add a veneer of democratic or electoral legitimacy, and this is straight out of the Kremlin’s playbook,” Michael Carpenter, the U.S. ambassador to the Organization for Security and Cooperation in Europe, told reporters at a State Department briefing in Washington.

As the war drags on and evidence of atrocities mounts, the West’s appetite has grown for retaliation that would have been rejected out of hand a few months ago. The U.S. Senate is preparing to take up President Biden’s $33 billion aid package for Ukraine, including a significant increase in heavy weaponry, and the European Union is expected this week to impose an embargo on Russian oil, a significant step for a bloc whose members have long depended on Russian energy.

House Speaker Nancy Pelosi, days after becoming the highest-ranking U.S. official to visit Kyiv since the war began, met in Warsaw with President Andrzej Duda of Poland on Monday, in an effort to strengthen Washington’s partnership with a key NATO ally that has absorbed millions of Ukrainian refugees and helped funnel arms to the battlefield.

Ms. Pelosi called for the “strongest possible military response, the strongest sanctions” to punish Russia for the invasion, despite Moscow’s threats of retaliation against the West. “They have already delivered on their threat that killed children and families, civilians and the rest,” she said.

More than two months into the invasion, Russia is struggling to capture and hold territory, according to a senior Pentagon official who briefed reporters on background to discuss intelligence. The official called Russia’s latest offensive in eastern Ukraine, the region known as Donbas, “very cautious, very tepid” and, in some cases, “anemic.”

“We see minimal progress at best,” the official said on Monday, citing incremental Russian advances in towns and villages. “They’ll move in, declare victory, then withdraw their troops, only to let the Ukrainians take it.”

Britain’s defense intelligence agency said that of the 120 battalion tactical groups Russia had used during the war — roughly 65 percent of its entire ground combat forces — more than a quarter had likely been “rendered combat ineffective.”

Some of Russia’s most elite units, including its Airborne Forces, have “suffered the highest levels of attrition,” the British assessment said, adding that it would “probably take years for Russia to reconstitute these forces.”

As the fighting raged in eastern and southern Ukraine, Moscow on Monday faced a growing diplomatic backlash after the Russian foreign minister, Sergey V. Lavrov, said that Jews were “the biggest antisemites.”

Mr. Lavrov made the remarks on Sunday to an Italian television journalist who had asked him why Russia claimed to be “denazifying” Ukraine when its president, Volodymyr Zelensky, was Jewish and members of his family had been killed in the Holocaust.

Mr. Lavrov replied that he thought Hitler himself had Jewish roots, a claim dismissed by historians, and added, “For a long time now we’ve been hearing the wise Jewish people say that the biggest antisemites are the Jews themselves.”

The Israeli Foreign Ministry summoned the Russian ambassador to Israel to explain Mr. Lavrov’s remarks, while Israel’s foreign minister, Yair Lapid, demanded an apology. The Israeli prime minister, Naftali Bennett, said of Mr. Lavrov’s remarks, “The goal of such lies is to accuse the Jews themselves of the most awful crimes in history, which were perpetrated against them.”

Those who escaped Mariupol and reached the southern city of Zaporizhzhia had managed to survive in a Russian-occupied city crushed by intense shelling, where Ukrainian officials say more than 20,000 civilians have been killed. About 20 civilians who were sheltering under the Azovstal mill got out of the city on Saturday, about 100 did so on Sunday and an unknown number followed on Monday.

Every morning at about 6 a.m., Ms. Gibert said, residents outside the plant lined up for rations handed out by Russian soldiers. First, they had to listen to the Russian national anthem and then to the anthem of the separatist Ukrainian region known as the Donetsk People’s Republic, she said.

A number was scrawled on the hand of each resident there, and then they waited, sometimes all day, to receive boxes of food, Ms. Gibert said. Inside a typical ration box was macaroni, rice, oatmeal, canned meat, sweet and condensed milk, sugar, butter. It was supposed to last a month, but didn’t always — especially when shared with a teenage boy, Ms. Gibert said.

Mariupol evacuation. Ukrainian officials vowed to continue a large-scale evacuation from Mariupol, despite renewed Russian shelling. The evacuation is seen as the best and possibly last hope for hundreds of civilians sheltering in bunkers beneath the wreckage of the Azovstal steel plant.

Moscow’s next move? Russia appears to be preparing to annex two regions in eastern Ukraine and possibly a third in the country’s south, a senior American diplomat said. The official said that the Kremlin would most likely stage “sham” elections to formally seize control.

In a city where many residential buildings have been destroyed and the remainder lacked power, heat or, much of the time, running water, Ms. Gibert said she and her son were among the lucky ones.

“Our apartment is still partially intact,” she said. “On one side, we have all our windows.”

Anastasiya Dembitskaya, 35, who reached Zaporizhzhia with her two children and a dog, said a drop in fighting in Mariupol over the past few weeks had allowed spotty telephone service to return and small markets to open, selling food from Russia and Russian-controlled Ukrainian territory at stratospheric prices.

“They’ve begun to at least remove the trash, which is good,” Ms. Dembitskaya said. “The bodies and the trash and the wires that were lying everywhere.”

Ksenia Safonova, who also arrived in Zaporizhzhia, said that she and her parents had wanted to leave Mariupol weeks ago but were pinned down by rocket fire.

“When we tried to leave, intense shelling started,” she said. “Everything was exploding. Jets were flying overhead and it was too scary to leave.”

When food became scarce, she said, her family relied on rations handed out by the Russian troops. She pulled out a can of preserved meat that she said was part of a Russian humanitarian aid package. Its expiration date was Jan. 31, nearly a month before the invasion began.

Ms. Safonova and her family were finally able to leave Mariupol on April 26 in a minibus with six other people. At checkpoints on the way to Zaporizhzhia, she said, Russian soldiers insulted her and her family, warning that Ukrainian forces would not welcome them and might shell them when they arrived.

Once, she said, the soldiers tried to trick them into revealing their loyalty to Ukraine.

“At one checkpoint they yelled ‘Glory to Ukraine,’ to see whether we would yell, ‘Glory to the heroes,’ though, of course, we knew that would end badly,” she said, referring to a patriotic greeting among Ukrainians that has become widespread during the war.

“We still know truth is on our side,” she said.