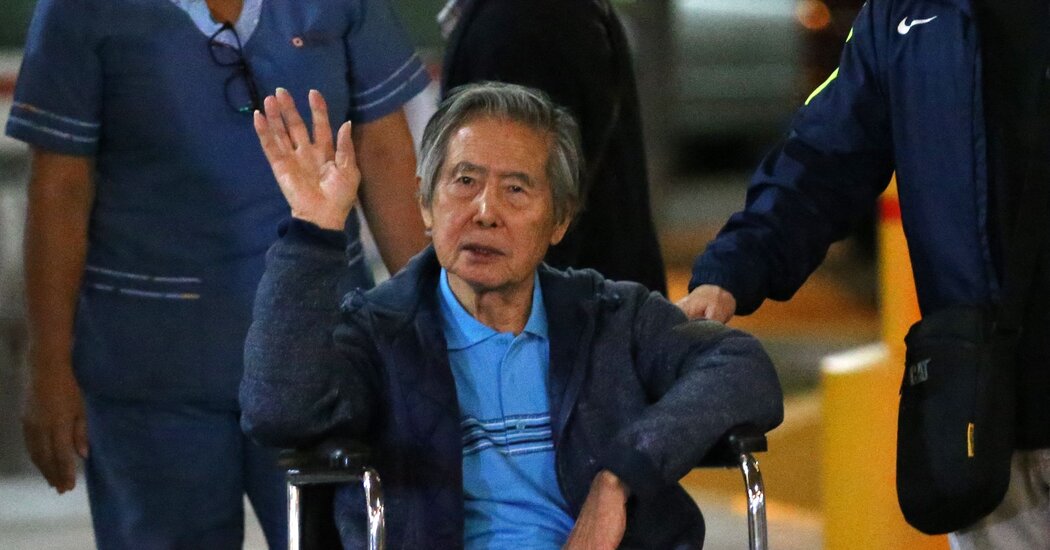 LIMA — Peru’s top court issued a ruling Thursday to release the former authoritarian president Alberto Fujimori from prison, where he has served less than 15 years of a 25-year sentence for committing human rights abuses during his dictatorship in the 1990s.

In a 4-to-3 decision, justices of Peru’s Constitutional Tribunal reinstated the controversial 2017 pardon of Mr. Fujimori that a lower court had annulled on the grounds it had been granted illegally. To many, the favorable ruling was a reminder to many of the Fujimori family’s influence in Peru as it has shaped the country’s politics over the last three decades.

“Unfortunately, the court now becomes an ally of impunity of major criminals,” Mr. Torres said in an interview on the local television station Exitosa. “I’ve always said this institution in Peru should disappear.”

Peru’s president, Pedro Castillo, echoed the criticism, tweeting, “the bodies of international justice to which Peru subscribes and rule of law must safeguard the effective exercise of justice for the people.”

Earlier this week, Mr. Fujimori, 83, returned to his prison cell after spending more than a week in a private health clinic, where his family said he received treatment for heart issues and pulmonary fibrosis, an incurable lung disease.

Mr. Fujimori, a deeply divisive figure in Peru, is seen as a corrupt and cruel dictator by some, and admired by others who credit him with ending a painful economic crisis and quashing bloody leftist insurgencies during a two-decade internal conflict.

Peruvian news outlets showed crowds of supporters of Mr. Fujimori celebrating the ruling, waving posters that read “Fujimori saved Peru.” A demonstration against the ruling was planned for Thursday evening in downtown Lima.

Mr. Fujimori’s lawyer, César Nakazaki, told the local broadcaster Radio Programas del Peru that he expected him to be released within one or two days.

His opponents called the ruling an insult to his victims and a blow to efforts to end impunity for the powerful in Peru, where four former presidents face money laundering or corruption charges that could imprison them for several years.

“Once more in our country the right to justice for victims isn’t being fulfilled,” Gisela Ortiz, a former culture minister and the sister of a man killed in a 1992 death squad massacre, told Radio Programas del Peru. “We have to keep insisting.”

The ruling marked the latest reversal in fortunes for Mr. Fujimori, a former agriculture professor who swept to power in 1990 on a populist platform and resigned by fax from his parents’ homeland of Japan a decade later as he faced widespread protests over accusations of corruption and electoral fraud.

Mr. Fujimori was detained in 2005 during a visit to neighboring Chile and extradited to Peru in 2007. Two years later, he was convicted of human rights violations for the extrajudicial killings of 25 civilians by death squads during his government’s counterinsurgency campaign. The court at the time said that his convictions amounted to crimes against humanity, which his opponents say should bar him from receiving any kind of pardon.

Mr. Fujimori has also been convicted of kidnapping and political corruption,and is still awaiting trials related to another massacre and the alleged forced sterilization of Indigenous women while he was in power.

On Christmas Eve in 2017, former center-right president Pedro Pablo Kuczynski granted Mr. Fujimori a humanitarian pardon after striking a deal with a faction of Mr. Fujimori’s supporters in Congress that helped him avoid impeachment. But within a year, a Supreme Court judge had annulled the pardon and ordered him back to prison, finding it had been granted for political and not medical reasons as required by law.

The pardon triggered large nationwide demonstrations and cost Mr. Kuczynski key political support that contributed to his resignation in 2018. Mr. Kuczynski is now under house arrest awaiting a trial over accusations of corruption that he denies.

An attorney representing Mr. Fujimori’s victims, Carlos Rivera, said Thursday that they have asked the Inter-American Court of Human Rights to intervene, as it did in 2018, when it ordered Peruvian courts to review the legality of the pardon.

Omar Cairo, a constitutional lawyer, said the court could find the ruling illegal and order Peru to annul the pardon again. Peru is a signatory of a regional human rights convention and bound to the court. The government of Mr. Castillo could respond to a potential regional court’s ruling by reordering Mr. Fujimori’s capture or granting its own pardon, citing his current medical issues, Mr. Cairo said.

However, a decision from the human rights court could take several weeks.

It was unclear on Thursday where Mr. Fujimori would live after leaving the prison cell, which was built for him at a naval base on the outskirts of Lima. After the pardon in 2017, Mr. Fujimori moved into a large house in a residential district in the capital that was reportedly paid for by his supporters and asked for forgiveness from Peruvians.

However, Mr. Fujimori has not acknowledged guilt in any of his convictions and has not paid any of the millions of dollars that he owes the Peruvian state as civil reparations.

More than two decades after he fled Peru, the right-wing populist movement Mr. Fujimori built during his decade in power is still influential in the country.

His daughter, Keiko Fujimori, 46, is an outspoken opposition leader and came close to winning the presidency in the past three elections. Her party now holds 24 seats in the current Congress of 130 lawmakers, which will vote on March 28 on whether to impeach Mr. Castillo.

The habeas corpus that the Constitutional Tribunal granted for Mr. Fujimori on Thursday was one of three appeals before the court seeking his release, and came after the death last year of a justice who was seen as tipping the balance against freeing the former president, Mr. Rivera said.