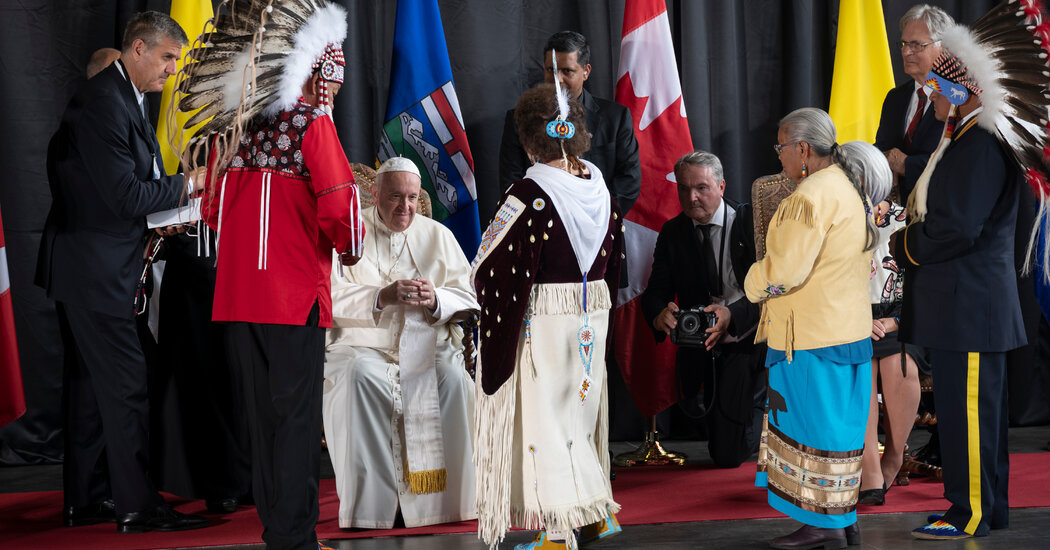 OTTAWA — Pope Francis, on his first full day in Canada on Monday, is expected to ​apologize to ​Indigenous communities for the Roman Catholic Church’s role in ​the country’s notorious residential school system, ​​where thousands of Indigenous children died, and countless others were sexually and physically abused.

The pope’s six-day visit comes after years of pleas from Indigenous leaders and leading politicians for a Vatican apology about the schools, which were designed to erase Indigenous culture and language by forcibly separating children from their families to assimilate them into Western ways.

Some Indigenous leaders say it will fill in one of the biggest remaining pieces in Canada’s efforts at reconciliation over a brutal education system that a national commission declared to be a form of “cultural genocide.”

“Many of us have had thoughts about the Catholic Church for a long time and this particular moment may sweep aside these doubts that have been there,” said Phil Fontaine, the former national chief of the Assembly of First Nations, who, 32 years ago, was one of the first Indigenous leaders to publicly describe the abuse he suffered at Catholic-run residential schools.

“To make it all work, you have to be able to forgive,” he added. “And that means you have to make peace with the church.”

But others, especially some younger Indigenous people, are greeting the pope’s visit with indifference.

“I don’t care about the pope, I’m very critical about the pope visit,” said Riley Yesno, 23, a doctoral student at the University of Toronto who is from Eabametoong First Nation in Ontario.

The Canadian government formally apologized 14 years ago for establishing the schools and has paid billions of dollars in reparations to former students. The Protestant churches that were also involved in the schools long ago followed suit.

The Catholic Church ran 60 to 70 percent of the roughly 130 residential schools under contract to the government. Yet the Vatican for years had repeatedly resisted calls for a papal apology.

That changed this year after a delegation representing Canada’s three largest Indigenous groups traveled to the Vatican in March to again press for an apology in Canada. The pope, who apologized at the Vatican, expressing “sorrow and shame” for the abuses Indigenous people endured, agreed to apologize in Canada too.

For Francis, the six-day trip will mark the end of a long travel drought. It will be his first trip out of Rome since April, when he spent a weekend in Malta where he appealed for better treatment of migrants.

The Vatican abruptly postponed a six-day trip to the Democratic Republic of Congo and South Sudan, scheduled to take place in early July, citing continuing problems with the pope’s knee that have made it difficult for him to walk.

He now regularly appears in public using a cane or seated in a wheelchair, and he has apologized for remaining seated during public audiences.