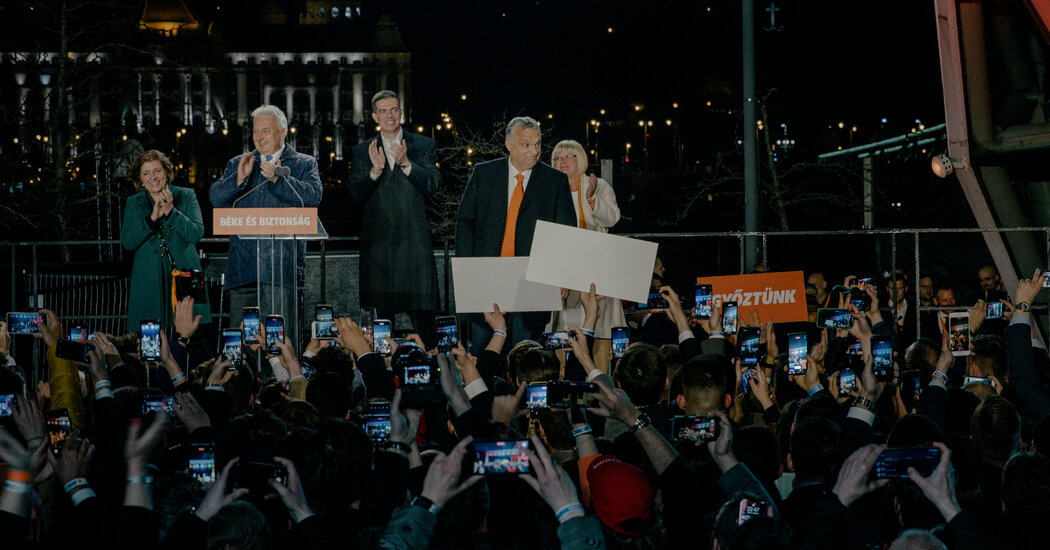 BUDAPEST — Overshadowed by the war in Ukraine, elections on Sunday in Hungary and Serbia appear to have extended the tenures of Europe’s two most Kremlin-friendly leaders, both populist strongmen fortified by their overwhelming control of the media and cheap energy from Russia.

With more than 60 percent of the votes counted in Hungary, preliminary results indicated that Viktor Orban, Hungary’s prime minister since 2010, and already Europe’s longest serving leader, had won a fourth consecutive term despite accusations by the opposition that he has enabled Russia’s military onslaught by cozying up for years to President Vladimir V. Putin of Russia.

“We won a victory so big that you can perhaps see it from the moon, and certainly from Brussels,” Mr. Orban told a jubilant crowd of supporters late Sunday, taking a dig at the European Union, which he has long accused of pushing L.G.B.T.Q. and migrant rights in defiance of the democratic will of Hungarian voters.

The preliminary results dashed the hopes of Mr. Orban’s political foes that an unusually united opposition camp could break his ruling Fidesz party’s increasingly authoritarian grip on the Central European nation next to Ukraine.

Ukraine’s president, Volodymyr Zelensky, speaking early Sunday in his capital, Kyiv, described Mr. Orban as “virtually the only one in Europe to openly support Mr. Putin.”

Asked about Mr. Zelensky’s assessment after casting his vote in Budapest on Sunday morning, Mr. Orban said curtly: “Mr. Zelensky is not voting today. Thank you. Are there any other questions?”

President Aleksandar Vucic of Serbia, also Moscow-friendly, has governed Serbia since 2012, and was expected to win re-election after rallying his nationalist and pro-Russian base by refusing to join the European Union in imposing sanctions on Russia. Serbia hopes to become a member of the European bloc, but its application has stalled.

An unusually high turnout in Serbia of nearly 60 percent forced officials to keep polling stations open late into the evening in some areas. Amid complaints of foul play by the opposition, the central election commission in Belgrade, the capital, said it would not issue results until Monday morning.

But exit polls indicated that Mr. Vucic would win a new term as president and that his Serbian Progressive Party would retain its hold on Parliament, albeit with a reduced majority. The opposition said it had won control of the municipal government in Belgrade.

Hungary and Serbia have very different histories. Mr. Orban governs a country that, until he came to power, viewed Russia with great distrust as a result of its past suffering at Russia’s hands, most notably when Moscow sent troops to brutally crush an anti-communist uprising in 1956. Mr. Vucic’s nation, however — Slavic and Orthodox Christian, like Russia — has long looked to Moscow as its ally and protector.

But under the two strongmen leaders, both countries have over the past decade drastically reduced the space for critical media voices, turning television stations with national reach into propaganda bullhorns and moving toward authoritarian rule. Each has cultivated close ties with Mr. Putin, who endorsed the Hungarian leader’s election campaign when he visited Moscow in February shortly before the invasion of Ukraine.

Serbia declined to impose sanctions on Russia while Hungary, a member of the European Union since 2004, agreed to an initial round of European sanctions but has strongly resisted extending them to include restrictions on energy imports from Russia.

In contrast to leaders in neighboring Poland, previously a close ally of Mr. Orban thanks to their shared hostility to liberal values, the Hungarian leader has also refused to let weapons destined for Ukraine pass though his country.

Before Hungary’s election, Mr. Orban hit back to counter opposition charges that his policy on Ukraine had betrayed not only foreign allies but also Hungary’s own painful memories of aggression by Russia. Mr. Orban mobilized the news media, most of which is controlled by the state and by friendly tycoons, to cast his opponents as warmongers bent on sending Hungarian troops to fight against Russia. The election offered a “choice between war and peace,” pro-government media warned.

The campaign seems to have worked, even among some older voters who remember the suffering caused by Moscow’s troops in 1956. “Why should Hungarian boys fight for Ukraine?” asked Janos Dioszegi, who was 13 at the time of the Hungarian uprising and whose father was imprisoned for 14 years by Soviet-backed authorities for his part in the anti-Moscow uprising. He said “of course” he chose Mr. Orban’s Fidesz party when he voted in Nagykovacsi, a small town near Budapest.

Echoing a line frequently aired in Fidesz-controlled media outlets, Mr. Dioszegi said there was no need to help Ukraine defend itself because it had provoked the war by becoming “a military base for America.”

Until Mr. Putin sent troops into Ukraine on Feb. 24, the centerpiece of Mr. Orban’s election campaign was an inflammatory referendum, timed for the day of the parliamentary election, on whether young children should be taught in school about gender transition surgery treatment, and exposed without restriction to sexually explicit material.

The war next door in Ukraine, however, derailed Mr. Orban’s effort to get voters to focus on transgender individuals and gays, forcing a reboot focused on painting his opponents as eager to take Hungary to war.

When hundreds of pro-Ukrainian Hungarians and refugees from Ukraine gathered on Saturday in central Budapest to denounce the government’s fence-sitting on the war, the main state-controlled television station, M1, described the event as a “pro-war rally.” Anna Olishevska, a 24-year-old Ukrainian from Kyiv who took part, praised the ordinary Hungarians who she said had helped her after she fled across the border. More than 500,000 Ukrainians have crossed into Hungary over the past month, far fewer than the more than two million who have entered Poland but still a large number for a country where venomous hostility to foreign migrants had long been the cornerstone of Mr. Orban’s often xenophobic political platform.

While delighted by her reception in Hungary, Ms. Olishevska said the government had been so tentative in condemning Russia’s invasion and resistant to helping Ukraine defend itself, that she worries about staying in Hungary if Mr. Orban won another term.

“I can’t stay in a country where the government supports Russia,” she said, waving a hand-painted sign telling Mr. Putin where to stick his rockets.

Some prominent supporters of Mr. Orban’s party have even blamed Ukraine for the bloodshed in 1956, with Maria Schmidt, a historian and museum director, claiming falsely on Saturday that Nikita S. Khrushchev, the Soviet leader who ordered troops into Hungary that year, was Ukrainian. He was Russian. Ms. Schmidt misrepresented the Soviet leader’s origins in response to a tweet by the British comedian John Cleese, who urged Hungarian voters to consider whether it was Russia or Ukraine that invaded Hungary in 1956.

The blizzard of distortions and falsehoods in Hungarian news media outlets controlled by Fidesz has left opposition supporters in despair.

“They just repeat lies over and over, day after day,” Judit Barna, 81, a doctor, said outside a central Budapest polling station, where she had just voted for a united opposition ticket headed by Peter Marki Zay, a conservative small town mayor.

Referring to Mr. Orban’s early political career as an anti-Moscow firebrand who in 1989 demanded that Soviet troops leave, she asked: “How is it possible after 40 years of Soviet occupation and 30 years of democracy that the same guy who once shouted, ‘Russians, go home’ can now say that Russia is fighting a just war in Ukraine?”

Thanks to Fidesz’s stranglehold on the media, she added: “Half of Hungary’s population eats up all these lies. This is Hungary’s shame.”