Reunited in Bucha, a Ukrainian Family Comes to Terms With War’s Traumas 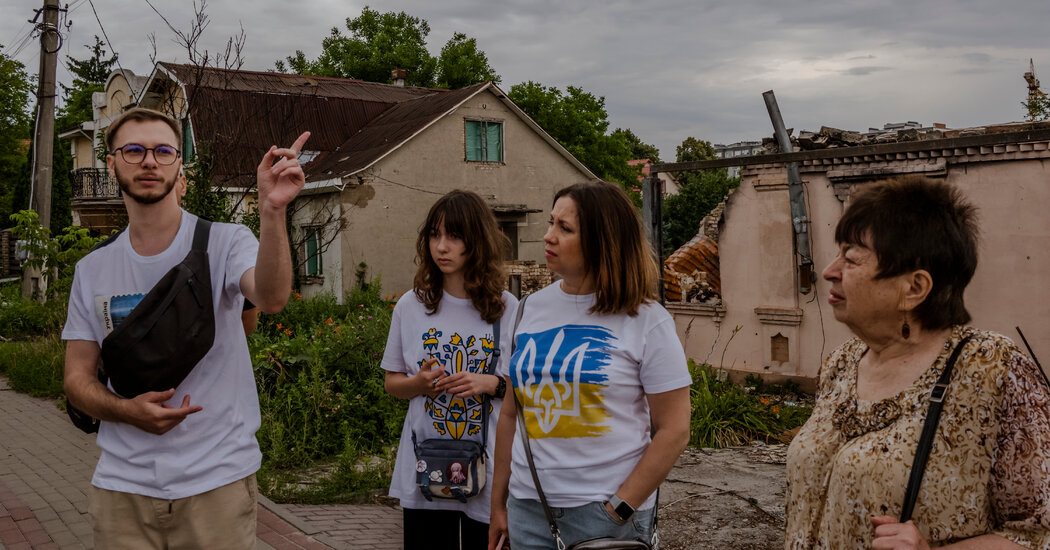 Reunited in Bucha, a Ukrainian Family Comes to Terms With War’s Traumas

BUCHA, Ukraine — For the first time since the war began, the Stanislavchuk family was together again.

Yehor was leading his parents, Natasha and Sasha, his sister, Tasya, and his grandmother, Lyudmila, on a tour of Bucha, the quaint suburb of Kyiv that has become synonymous with Russian savagery.

Here was the school where Yehor had hid for two weeks as Russian troops bombed and murdered their way through the town. There, at the entrance to the school basement, was where a Russian soldier had shot a woman in the head just because he could. And over there, on top of the yellow crane, was where the sniper sat, picking off civilians as they scrounged for food and water.

Yehor, 28, spoke calmly, and no one expressed surprise. These stories are well known now in Ukraine.

It was cool and cloudy, and if you squinted you might be able to ignore the incinerated cars and piles of brick and ash that once were homes and imagine that it was a regular summer Saturday in July. White hydrangeas were blooming, and the cherry, apple and plum trees were laden with unripe fruit. At a cafe called Mr. Coffee, the young barista was doing brisk business, selling lattes and fresh croissants to families and hipsters with neck tattoos. Children were being pushed in strollers and riding scooters and hanging from jungle gym bars. They seemed happy.

The last time I saw the Stanislavchuks was on March 11. At the time, Yehor was trapped in Bucha, listening to the footsteps of Russian soldiers on the floor above the basement where he was hiding. He was plotting his escape, but no one knew if it was safe for him to leave.

A couple Yehor knew had tried to get out of Bucha a few days earlier. Only the wife came back, shot through the leg. Her husband had been killed.

I was with the rest of the Stanislavchuks in Mykolaiv, the southern Ukrainian port city where the family is from. We spent that March day awaiting news of Yehor’s progress. Natasha prepared a meal of mashed potatoes and stewed beef that we washed down with shots of vodka. She had an Orthodox icon of the Virgin Mary with her, along with a holy book opened to a prayer about children. Occasionally we rushed to the basement to hide from incoming artillery.

For hours, no one heard anything.

“I never would have thought that my son would see war,” Sasha said that day.

The family’s story is not extraordinary by the measure of the last four months. The Stanislavchuks are like many Ukrainians these days, decent people struggling to endure the unfathomable with no map to guide them. We had been introduced by friends whom Yehor and I have in common. I had been covering the war since it erupted, and when I arrived in Mykolaiv in early March to write about a Ukrainian counteroffensive there, the family adopted me, giving me the first warm meal I’d had in weeks.

When the war began, they had been in Bucha, less than an hour from Kyiv, putting the finishing touches on a new showroom for their interior design business. Their main store in Mykolaiv had been doing well, and the family hoped to expand. Yehor had moved to Bucha shortly after college and the family fell in love with the town’s pine forests and colorful modern buildings that made it look as if it could be a suburb of Oslo.

The first rockets hit the Hostomel airport near Bucha around five in the morning on Feb. 24, shaking the family awake. Sasha and Natasha’s first thought was to get home to Mykolaiv, where Tasya, 11, was staying with her grandmother. Only when they were stuck in traffic along with everyone else trying to flee Kyiv and its environs, did they wonder whether they should have taken Yehor with them.

“To be honest, for a long time I could not come to terms with the fact that on the 24th we were here, and we did not bring him with us,” Natasha told me. “I thought about consulting a psychologist. How could I do that? I had the feeling that we just abandoned him.”

Their business shut down and their son trapped by Russian forces nearly 400 miles away, Sasha and Natasha threw themselves into volunteer work in Mykolaiv, driving around the city in their white SUV delivering food and medicine to neighbors too infirm or scared to leave their homes. Though Bucha and the towns around Kyiv were bearing the brunt of the Russian onslaught at the time, life in Mykolaiv was not easy. Air raid sirens sounded constantly, and each day brought new missile attacks on homes and business as Russian forces lay siege.

“There are those moments when morale falters and when your mood sours,” Natasha said to me on the day we met. “But when you see that someone needs your help and support, you have to get up and move.”

I was driving with them to make a food delivery when Yehor called. He had lost all his documents, including the deed to his apartment. Worse, in the chaos of his escape he had misplaced the carrier containing his beloved pet rabbit, Diva. But he had made it out of Bucha without a scratch and was now with a friend in the relative safety of Kyiv.

“The most important thing is that you made it out of there,” Natasha told him over the phone. “The rest we’ll find, don’t worry.”

Minutes after she hung up, the air raid siren sounded again, and we dashed into a basement.

Not much has changed in the war since then, but some things have. Ukrainian forces have pushed the Russians back from Mykolaiv, beyond their artillery range. Now they pound the city with cruise and ballistic missiles all day, and it is practically unlivable. Clean water has been unavailable for weeks. Most residents have fled.

By contrast, Bucha, the site of a massacre not seen in Europe for a generation, is now almost serene.

And so the Stanislavchuks have converged there, for now.

Yehor came back on May 15, after Bucha had been liberated from Russian forces. The rest of the family arrived the day before my visit — Natasha, Lyudmila and Tasya returning from Germany, where they had spent three and a half months, and Sasha driving up from Mykolaiv with the family cat, Timur.

When we met, they were wearing yellow and blue patriotic T-shirts that Natasha had bought on her drive back.

They have crammed together into Yehor’s small two-room apartment, now piled high with the family’s belongings. In a large cage in the kitchen sits Diva, brown and fat and nibbling on vegetables. Yehor was able to track her down three days after his escape.

With Mykolaiv still under siege, the family hopes to open the new showroom, not far from Yehor’s place in Irpin, which is next to Bucha. They reckon that with people now returning to their shattered homes, their services might be needed. The whole family will pitch in.

Yehor speaks easily and matter of factly of his ordeal.

“This is where a guy on a bike was killed,” he explained as we drove down Yablonska Street, where up to a dozen people were shot to death by Russian troops. “Uncle Misha was lying here, too.”

“There,” he added, “a Russian soldier was lying with his finger pointing in that direction, in the direction of Russia as if that is where he wanted to return.”

The bodies were fresh when Yehor walked Yablonska Street on March 11, pushing an elderly woman he called Auntie Tanya in a wheelchair. The two, who were not acquainted before the war, concocted a back story should they be stopped by Russian soldiers. Yehor, who is of fighting age and was at greater risk out in the open, would say that the woman was his grandmother and that he was bringing her to safety in Kyiv.

Somehow the Russian checkpoint on the edge of the city was abandoned that day, and Yehor and Auntie Tanya were able to walk unmolested to the Ukrainian positions just outside town.

On hearing his story, our mutual friend, Nastya, had suggested that Yehor see a therapist. He did for a while, but stopped. He sleeps fine, he said, and is largely at peace with what happened. But he acknowledges that something has changed in him.

“Life won’t be the same as before,” he said as we drove. “I feel very heavy, lazy and need some kind of serious inspiration.”

We drove past the local shopping center, which appeared to have melted into the ground, and past the remains of the drama theater, which had been blown apart. Nearby, a family was picnicking amid the pine trees, and a young girl, maybe 4 or 5 years old, was dancing with a pink umbrella in her hands.

On Yehor’s car stereo, Sinead O’Connor was wailing, “Anybody want to drink before the war?”