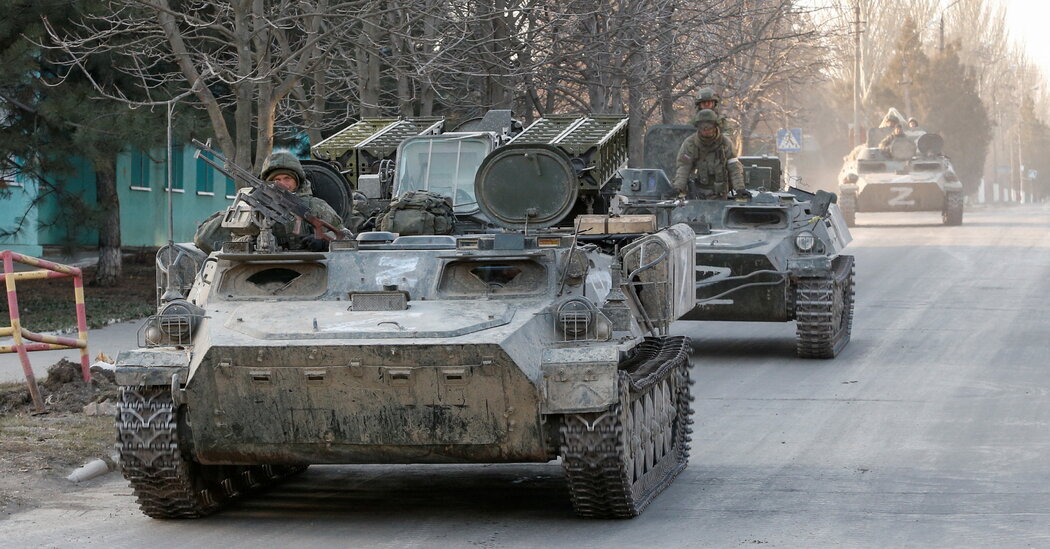 Russia signaled a possible recalibration of its war aims in Ukraine on Friday as the Kremlin faced spreading global ostracism for the brutal invasion, hardened Western economic punishments and a determined Ukrainian resistance that appeared to be making some gains on the ground.

A statement by Russia’s Defense Ministry said the goals of the “first stage of the operation” had been “mainly accomplished,” with Ukraine’s combat capabilities “significantly reduced,” and that it would now focus on securing Ukraine’s eastern Donbas region, where Russia-backed separatists have been fighting for eight years.

The Defense Ministry statement was ambiguous about further possible Russian territorial ambitions in Ukraine, where its ground forces have been mostly stymied by the unexpectedly strong Ukrainian military response.

But on a day when President Biden was visiting U.S. soldiers in Poland near the Ukrainian border, the statement suggested the possibility that the Russians were looking for a way to salvage some kind of achievement before the costs of the war they launched a month ago became impossibly onerous.

While Russia “does not exclude” that its forces will storm major Ukrainian cities such as Chernihiv, Mykolaiv and the capital, Kyiv, the Defense Ministry statement said that taking them over was not the primary objective.

“As individual units carry out their tasks — and they are being solved successfully — our forces and means will be concentrated on the main thing: the complete liberation of the Donbas,” Col. Gen. Sergei Rudskoi, a senior Russian military commander, said in the statement, his first since Russia’s invasion on Feb. 24.

Whether General Rudskoi’s statement was sincere or simply strategic misdirection was difficult to assess. But the statement amounted to the most direct acknowledgment yet that Russia may be unable to take full control of Ukraine and would instead target the Donbas region, where Russia has recognized the independence of two Kremlin-backed separatist areas that it calls the “Donetsk People’s Republic” and the “Luhansk People’s Republic.”

Russia has also insisted that Ukraine recognize its control of Crimea, which President Vladimir V. Putin’s forces seized from Ukraine in 2014.

President Volodymyr Zelensky of Ukraine has ruled out ceding those regions to stop the war.

Pavel Luzin, a Russian military analyst, cautioned that the public pronouncements of Russian military commanders should be regarded skeptically. While Russia could indeed be narrowing its war aims, he said, General Rudskoi’s statement could also be a feint as Russia regroups for a new offensive.

“We could say that this is a signal that we’re no longer insisting on dismantling Ukrainian statehood,” Mr. Luzin said. “But I would rather see it as a distracting maneuver.”

General Rudskoi’s statement came as Ukraine acknowledged that Russian forces had been “partially successful” in achieving one of their key objectives — securing a land corridor from Russia to the Crimean Peninsula.

While Russia already controlled much of the area, the Ukrainian Defense Ministry said the route allowed Russian troops and supplies to flow between Crimea and Russia.

But some Ukrainian officials said the significance of such a route might be overstated. Oleksandr Danylyuk, a former secretary of the National Security and Defense Council of Ukraine under Mr. Zelensky, described the land bridge as a minor Russian victory and said the Kremlin was moving to secure Donetsk and Luhansk to “sell to the Russian public as a potential victory.”

In Moscow, Mr. Putin, who has made any criticism of the war a potential crime, used a televised videoconference with the winners of a presidential arts prize on Friday to deliver a diatribe about “cancel culture” that made no mention of the war in Ukraine.

In embracing a term that has become a favorite of the American political right to reprise his contention that the West is trying to erase Russian culture and history, Mr. Putin cited J.K. Rowling, author of the “Harry Potter” books, whose comments about transgender women have been criticized as transphobic.

“Not so long ago, the children’s writer J.K. Rowling was also ‘canceled’ for the fact that she — the author of books that have sold hundreds of millions of copies around the world — did not please fans of so-called gender freedoms,” Mr. Putin said.

Ms. Rowling responded on Twitter that, “Critiques of Western cancel culture are possibly not best made by those currently slaughtering civilians for the crime of resistance, or who jail and poison their critics.” She added the hashtag #IStandWithUkraine.

As Mr. Putin spoke, there were indications that Ukrainian forces were making some progress in the second week of their counteroffensive. A senior Pentagon official said that Russian forces no longer had full control of the southern port of Kherson and that the city, the first major urban center to be captured in the Russian invasion, was now “contested territory.”

The Pentagon assessment contradicted General Rudskoi’s claim on Friday that the Kherson region was “under full control.”

In another sign of the bloody stalemate in Ukraine, Russian soldiers have adopted “defensive positions” near Kyiv, the Pentagon official said, adding that Russia appeared to be “prioritizing” the fight in eastern Ukraine, as General Rudskoi had indicated.

Mr. Biden, on the second day of his three-day visit to Europe because of the Ukraine crisis, traveled to Rzeszow, Poland, about 50 miles from the Ukrainian border, where he met with members of the 82nd Airborne Division who are serving as part of NATO’s efforts to protect Poland and other member states from Russian aggression.

Greeting American service members who were eating pizza in a cafeteria, Mr. Biden called them “the finest fighting force in the history of the world,” and added, “I personally thank you for what you do.”

Later, Mr. Biden met with President Andrzej Duda of Poland and officials managing the humanitarian response to the more than two million Ukrainian refugees who have fled to Poland to escape the shelling and deprivation.

Mr. Biden also announced a deal to increase U.S. shipments of natural gas to help wean Europe off Russian energy. But it remained unclear exactly how the administration would achieve its goals.

The deal calls for the United States to send an additional 15 billion cubic meters of liquefied natural gas — roughly 10 to 12 percent of current annual U.S. exports to all countries. But it does not address the lack of port capacity to ship and receive more gas on both sides of the Atlantic.

Still, American gas executives welcomed a renewed emphasis on exports as a sign that the Biden administration was now seeking to promote the U.S. oil and gas industry rather than punish it for contributions to climate change.

“I have no idea how they are going to do this, but I don’t want to criticize them because for the first time they are trying to do the right thing,” said Charif Souki, executive chairman of Tellurian, a U.S. gas producer that is planning to build an export terminal in Louisiana.

Robert Habeck, the vice chancellor and economic minister of Germany, said his country expected to halve imports of Russian oil by midsummer and nearly end them by year’s end — sooner than many thought possible. He estimated that Germany, Europe’s biggest economy, could be free of Russian gas by mid-2024.

Images and videos from Ukraine that emerged on Friday underscored the escalating death toll and destruction.

Newly surfaced security camera footage, verified by The New York Times, showed an attack on people in line for emergency aid outside a post office and shopping center in the battered northeastern city of Kharkiv on Thursday. Oleg Sinegubov, the head of the regional government there, said that at least six civilians had been killed and 15 wounded.

Photographs out of Kharkiv on Friday also showed a large fireball and nearby cars and buildings on fire, as residents fled on foot and bicycle, carrying whatever belongings they could grab in the aftermath of the attack.

In the central city of Dnipro, Russian missile strikes on a military facility destroyed buildings late Thursday night, according to Ukrainian officials, who said that casualties were still being assessed.

And in Mariupol, the southern port savaged by Russian attacks, Ukrainian officials said that an estimated 300 people had been killed in a March 16 strike on a theater used as a bomb shelter.

It was unclear how officials had arrived at that estimate. Ukrainian officials have said that about 130 people were rescued from the theater, which was attacked even though “children” had been written in giant letters on the pavement on both sides of the building.

The United Nations said on Friday that more than 1,000 civilians have been killed, including 93 children, since Russia’s invasion began, many in what appeared to have been indiscriminate bombardments that could constitute war crimes.

The United Nations cautioned that it had not been able to verify the death toll in areas of intense conflict, including Mariupol, and said the actual number of injured and dead was likely to be considerably higher.

In a sign that diplomatic efforts were struggling, Dmytro Kuleba, Ukraine’s foreign minister, rejected comments by President Recep Tayyip Erdogan of Turkey, who had suggested that Ukraine was open to concessions in four key areas.

In an interview released Friday, Mr. Erdogan, who is hosting talks between Ukrainian and Russian delegations, said that Ukraine was willing to drop its bid for NATO membership, accept Russian as an official language, make “certain concessions” about disarmament and agree to “collective security.”

But Mr. Kuleba said the negotiations had proved “very difficult” and that Ukraine had “taken a strong position and does not relinquish its demands.”

“We insist, first of all, on a cease-fire, security guarantees and territorial integrity of Ukraine,” he said, adding that there was “no consensus with Russia on the four points mentioned by the president of Turkey.”

“In particular,” he said, “the Ukrainian language is and will be the only one state language in Ukraine.”