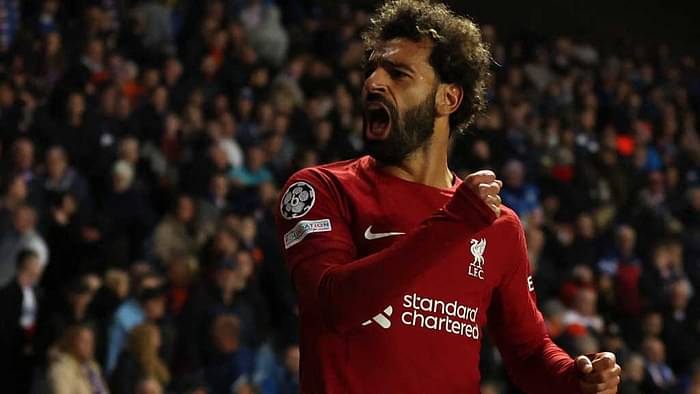 Substitute Mohamed Salah scored the fastest hat-trick in Champions League history as Liverpool came from behind to thrash Rangers 7-1 on Wednesday and put themselves on the verge of qualification for the competition's knockout stages.

Salah came off the bench in the second half with Liverpool leading 3-1 and fired a treble timed at six minutes and 12 seconds between the first and third goals to turn a hard-fought win into a rout.

Roberto Firmino had dragged Liverpool back into the contest with a double strike and Darwin Nunez was also on the scoresheet before Harvey Elliott rounded off the scoring following Salah's goals.

It appeared a much-changed Liverpool were in for further frustration in a disappointing season so far as they fell behind for the eighth time in all competitions after Scott Arfield slotted home 17 minutes in to lift the roof off Ibrox.

That lead lasted less than eight minutes, however, as Firmino continued his prolific season with a near-post header to level things up from a corner.

Liverpool were much the better team right from the off in the second half and deservedly edged back in front 10 minutes after the interval, Firmino converting Joe Gomez's pinpoint low cross to take his goal tally to eight in all competitions.

With Rangers chasing the game, a fine finish from close-season signing Nunez put the game beyond the hosts before Salah took centre stage.

Elliott added to the home side's embarrassment with a late seventh, putting the seal on a victory that means Liverpool are second in Group A, and need just one point from their final two matches to be sure of a spot in the knockout stages, while Rangers are bottom, without a point.

"We were really just on it and meeting us in the wrong moment is not cool (for opponents)," Liverpool boss Juergen Klopp said.

"All the goals we scored were exceptional. Mo (Salah) came on and is on fire and interprets the position really well. It is a night where things work out for us.

"In the end we needed to get clear in the final third, which obviously worked out, all the goals were great, how we played them and set them up and finished them."

Coming into the match, of the 45 teams to have played at least 50 games in the Champions League, only Anderlecht had a lower win rate than Rangers' 12 victories in 65 games.

However, you would not have thought it at Ibrox, given how Rangers started. Former Liverpool forward Ryan Kent fired just over before Arfield found the bottom corner for Rangers' first Champions League goal of the season, and first in 383 minutes in the competition.

The defending from the home side left much to be desired as Liverpool levelled through Firmino, but that was as good as it got for the visitors in the opening period, with Rangers missing several chances to retake the lead.

The second half was a different story altogether, and Rangers completely crumbled as Liverpool improved.

Nunez's goal was as much to do with the hosts' poor defending, while Salah was presented with gift after gift having come off the bench for only the final 22 minutes.

Salah's incredible treble took him to 38 Champions League goals for Liverpool, now the most by any player for an English club in the competition, surpassing Didier Drogba for Chelsea and Sergio Aguero for Manchester City, who both have 36.

The stadium was empty as Elliott stroked home to complete a flattering scoreline for Liverpool, given they had struggled for much of the opening period.

"It is very hard to explain, to process," Rangers boss Giovanni van Bronckhorst said. "I am still processing the game, especially the second half.

"The first half and the last half-an-hour was night and day, how we played and that difference in level, that is too much in Champions League. I cannot explain it right now." Defunct cell phones are just the tip of the 44.48-million-ton iceberg of global...