Saudi Arabia Bankrolls a Challenge to the PGA Tour 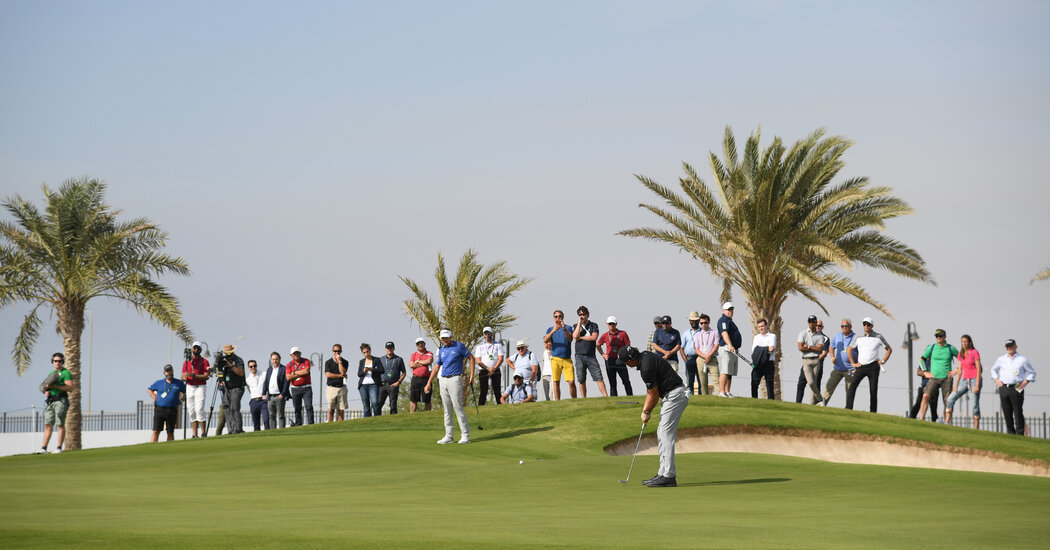 Saudi Arabia Bankrolls a Challenge to the PGA Tour

But when it bought a storied English soccer team, Newcastle United, last year thousands of fans massed outside the club’s stadium in northeast England to cheer Saudi Arabia, some of them wearing Saudi-style headdresses. It was a startling reception for a distant Middle Eastern desert kingdom better known for oil than sports or entertainment, and frequently a target of international condemnation over its human rights record.

Small wonder, then, that Saudi Arabia saw opportunity in bankrolling a new, upstart golf tournament to challenge the PGA Tour this year, an investment that has pitched the world of professional golf into turmoil and divided its biggest stars.

The kingdom sees sports as a winning formula to refresh its image, part of a campaign led by its de facto ruler, Crown Prince Mohammed bin Salman, to transfigure the country from a sleepy, conservative oil producer into a dynamic hot spot for tourism, investment, futuristic technology and more.

“In what other circumstances would you get that to welcome a Saudi investment?” Kristian Coates Ulrichsen, a scholar of Gulf politics at the Baker Institute for Public Policy at Rice University, said of the reaction from Newcastle fans. “That shows the appeal.”

The Saudi financing of the upstart LIV Golf circuit is the latest example of Gulf monarchies pouring vast oil wealth into sports and culture over the last decade or more, hoping to raise their countries’ international profiles and shift how they are viewed in the West.

Bahrain has hosted Formula One races; the United Arab Emirates has opened branches of the Louvre and New York University in Abu Dhabi, its capital. Elite soccer has been a particularly popular investment: The Emirati royal family bought Manchester City, another English team, while Qatar snapped up Paris Saint-Germain in France. Later this year, Qatar — a tiny monarchy that had no reputation for sports before it began pumping billions of dollars into its soccer program — will be the first Arab country to host the soccer World Cup.

But in some ways, it is the Saudis who have the longest way to go, and they who have made some of the most startling changes in recent years.

Prince Mohammed has spearheaded a huge overhaul aimed at weaning the kingdom’s economy off oil, creating private-sector jobs for young Saudis, who make up more than half the population, and opening up society. He has developed a tourism industry and drummed up investment, encouraged concerts and movies for young Saudis long starved of such entertainment, and stripped away restrictions that kept women in head-to-toe black gowns, barred them from driving and forbade them from mixing with men in public.

Since 2015, when the prince began his ascent to lead the kingdom, Saudi Arabia has spent hundreds of millions of dollars on glittery concerts, heritage sites, splashy art exhibits, a film festival and other cultural offerings. The kingdom has also invested more than $1.9 billion in sports over the last five years, according to a tally by Grant Liberty, a Britain-based human rights group.

Besides the takeover of Newcastle and the arrival of the LIV Golf Invitational, the Saudi-bankrolled golf upstart, Saudi Arabia has also paid to host high-profile boxing matches ($100 million), Formula One races (a reported $65 million per race), a snooker tournament ($33 million) and a series of World Wrestling Entertainment events ($500 million). It has approached the Women’s Tennis Association about hosting a tournament. It is even investing in e-sports.

While it remains unclear how much of a profit these investments will turn, they offer a range of other benefits.

For one, they put Saudi Arabia’s name in the news in ways unconnected to its dismal human rights record, its stalemated military intervention in Yemen, the murder by Saudi agents of the dissident Jamal Khashoggi in 2018 or the imprisonment of dissidents, activists and other Saudis critical of the government.

To Grant Liberty and other critics, that is precisely the point of the spending spree.

If world-famous athletes and sporting events associate with the country, “That creates a narrative of, ‘Well, they’ve bought into this, they’ve bought into the country,’” said Lucy Rae, who worked on a Grant Liberty report that accused the kingdom of using money to “sportswash” its reputation. “It’s the softening of the view of Saudi Arabia, which is what they would like.”

The danger, she added, was that “These sports stars are supporting a brutal, repressive regime that silences any form of opposition merely for having an opinion that’s different from the regime itself.”

Through a government spokeswoman, Saudi officials declined to comment for this article.

But sports are also part of a more sweeping vision Prince Mohammed has to make Saudi Arabia a global tourist destination. A kingdom that once welcomed only Muslim pilgrims headed for Mecca is now opening tourist attractions across the country, hoping to draw 100 million visitors a year by 2030. As a measure of the ambition of that target, France, the most visited country in the world, hosted 90 million tourists in 2019.

Some of the country’s tourism projects, including a heritage site billed as a less-crowded twin of the famous carved city at Petra, Jordan, might attract a wide range of visitors. But many of the projects are aimed at the wealthy and ultrawealthy, such as a cluster of multi-starred resorts on the Red Sea coast and a luxurious wellness retreat further up it.

In a valley outside Riyadh, the capital, the kingdom is building a development it is calling “Riyadh’s own Beverly Hills,” featuring luxury villas and a golf course designed by Greg Norman, the former world No. 1 who heads LIV Golf. (Nearby is Diriyah Gate, a complex that includes a UNESCO world heritage site, museums, residential developments and a car racetrack.)

“They need the attention of the globe’s high net worth individuals, and to get them to both visit and to invest in Saudi Arabia’s post-oil future,” said Kristin Smith Diwan, a senior resident fellow at the Arab Gulf States Institute in Washington who has studied the country’s tourism investments. “When you look at it in that context, then golf makes a lot of sense, or makes some sense.”

Bringing golf stars like Phil Mickelson into the Saudi orbit could pique the interest of the kind of global elite that Saudi Arabia hopes will visit and invest in the kingdom, catapulting it into a whole new level of prestige and influence.

“They want to be seen as where the rich and powerful congregate,” Ms. Diwan said.

“That’s hugely important to Saudi Arabia and to M.B.S. personally,” she added, referring to Prince Mohammed. “He really wants Saudi Arabia to be seen as a player.”

That demographic could include former President Donald J. Trump, with whom Prince Mohammed had a close relationship. One of the LIV Golf events, in late July, will be at the Trump National Golf Club in Bedminster, N.J.

Like the movie theaters, the concerts and the loosening social restrictions, sports contribute to recasting Saudi Arabia as a more business-friendly, livable place — an important shift for a country trying to lure investors and convince corporations to move their regional headquarters (and the foreign expatriates who work for them) from Dubai, a playground of fine dining and clubbing, to Riyadh, long derided as a backwater.

Compelled by a combination of tax breaks and threats that businesses that did not relocate risked losing Saudi government contracts, several dozen companies have announced plans in Riyadh, though it is unclear whether those operations are true regional headquarters or simply offices large enough to satisfy the Saudis.

But analysts say the kingdom recognizes that it still needs to build up entertainment and leisure for expatriates as well as for Saudis.

Golf does not turn Riyadh into Dubai. But it brings it one step closer.