Saudi Blogger, Jailed and Flogged for Liberal Views, Is Freed From Prison 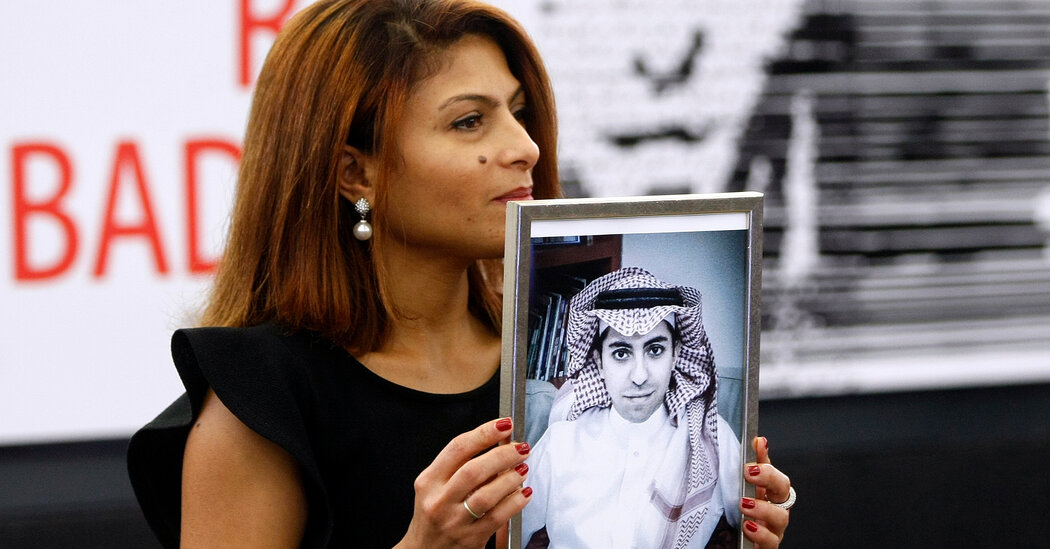 Saudi Blogger, Jailed and Flogged for Liberal Views, Is Freed From Prison

BEIRUT, Lebanon — A Saudi blogger who was flogged in a public square after expressing liberal views on the internet and whose case became a lightening rod for international criticism of the kingdom’s intolerance for dissent was released from prison on Friday, his wife and son wrote on Twitter.

“After 10 years in prison #Raifisfree!” wrote his wife, Ensaf Haidar, who has campaigned for the release of her husband, Raif Badawi, from Canada.

Amnesty International welcomed the news, saying that Mr. Badawi had been jailed “solely for exercising his right to freedom of expression.”

“His ongoing detention reveals the Saudi Arabian authorities’ utter contempt for the right to liberty, freedom of expression and even their own laws,” the group wrote on Twitter.

It was not immediately clear why Mr. Badawi, who was sentenced in 2014 to 10 years in prison, a fine of more than a quarter-million dollars and 1,000 blows with the cane, was released on Friday. Nor was it clear if he would be free to travel to Canada to reunite with his wife and children.

Saudi Arabia has barred other high-profile former prisoners from leaving the kingdom, presumably to avoid the bad press they might generate by speaking publicly about their experiences.

He was arrested in 2012, so one possibility is that he was given credit for time served and completed his term.

Mr. Badawi’s case, and the resulting prison term and corporal punishment, galvanized international criticism of Saudi Arabia, spearheaded by rights campaigners who saw it as a clear example of the kingdom’s repression of speech.

Ms. Haidar did not reply to calls and messages requesting comment, and the news was not reported by the Saudi state news media. A spokesman for the Saudi embassy in Washington did not respond to a request for comment.

Before his arrest, Mr. Badawi was not a well-known figure inside Saudi Arabia or abroad but ran a niche website called “Free Saudi Liberals” that published content supportive of secularism and critical of the kingdom’s religious authorities and their austere interpretation of Islam.

He was arrested in 2012 and put on trial for a range of criminal offenses that included cybercrime and disobeying his father, who denounced his son in the Saudi news media.

The Saudi justice system is based on Islamic Shariah law, and prosecutors initially tried to charge him with apostasy, which can be punished by death. That effort failed, but he was convicted on lesser charges and sentenced to seven years in prison and 600 blows.

Prosecutors sought a stiffer sentence, and in 2014, the court added a hefty fine, extended his prison term to 10 years and kept the 600 blows, to be administered in public in installments of 50 blows. On a Friday afternoon in early 2015, he was taken from a bus and beaten on his backside with a cane in front of a mosque in the Red Sea port city of Jeddah.

A bystander filmed the encounter, which ended with spectators chanting “God is great!” and applauding, and posted it on the internet, fueling international outrage. His sentence was not amended, but the flogging stopped.

Rights activists took up his case and published translations of his writings. In 2015, he was named the international co-recipient of Britain’s PEN Pinter Prize, a major free speech honor, and awarded the Sakharov Prize for Freedom of Thought, the European Union’s top human rights award. A campaign gathered speed to grant him the Nobel Peace Prize along with his brother-in-law Waleed Abulkhair, who ran a Saudi human rights organization and remains in prison.

Top officials from the United States and other countries raised his case with Saudi officials, but Mr. Badawi remained locked up.

Saudi Arabia has changed a lot since Mr. Badawi’s conviction, largely because of Crown Prince Mohammed bin Salman, who emerged as the kingdom’s de facto ruler after his father, King Salman, ascended the Saudi throne in 2015.

As part of a wide-ranging plan to diversify the economy and make life more interesting for the kingdom’s youthful population, Prince Mohammed has brought in concerts and movie theaters, granted women the right to drive, and loosened restrictions on their dress and ability to work in a range of fields.

He has also taken power away from the so-called “religious police” who used to enforce strict social mores, and sought to modify certain legal practices that have long rankled the kingdom’s Western partners, like the United States. In 2020, the kingdom banned flogging as a punishment.

While acknowledging the changes, rights groups and Saudi dissidents say the kingdom has gotten no less authoritarian and no more tolerant of dissenting views, especially those deemed to be critical of Prince Mohammed and his initiatives.

Notable cases include an economist who was put on trial for terrorism after he publicly questioned Prince Mohammed’s policies, and the death of Jamal Khashoggi, a dissident Saudi journalist who was killed and dismembered inside the Saudi consulate in Istanbul in 2018.