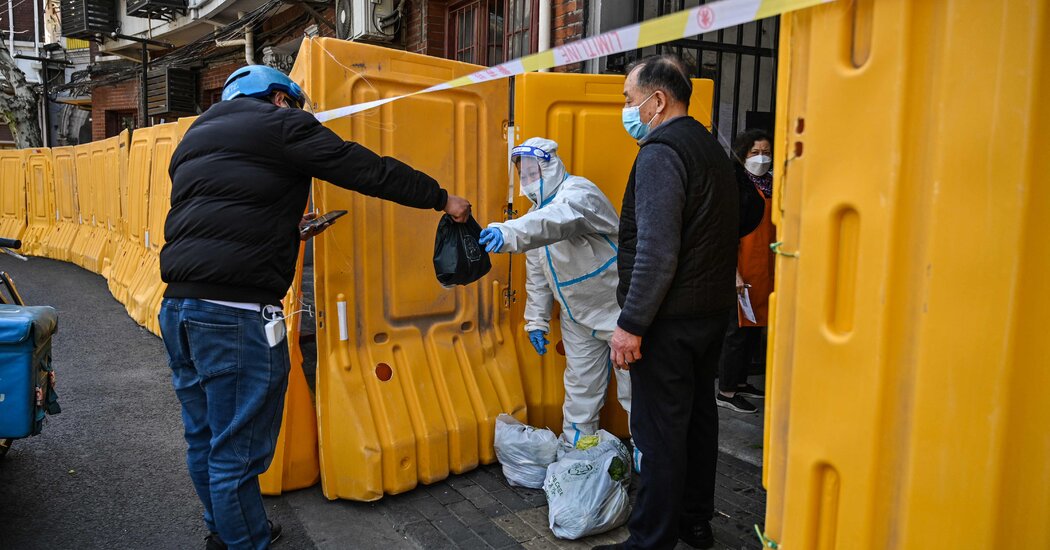 Even before Shanghai imposed a lockdown to curb a rapidly spreading Covid outbreak, life for many in China’s wealthiest city had been upended by the virus — and the government’s response.

Residents raced to hoard groceries in case they were ordered to stay home. Some protested at the gates of housing complexes that were locked with little notice. Others, sent to government isolation facilities, were forced to sleep on the floor because of a shortage of beds.

For still others, the city’s Covid-19 restrictions have had life-threatening implications. Some residents have been confined at home, unable to get kidney dialysis or other urgent treatment. A nurse who suffered an asthma attack died after she was denied care by a hospital that cited Covid prevention protocols.

Officials had tried to limit disruptions by confining buildings or neighborhoods, arguing that a full-scale lockdown in the city of 26 million was untenable. Officials said their more surgical approach would curb the outbreak while preserving economic life in Shanghai, a hub for international business.

Then, on Sunday evening, the city’s officials signaled that doing both at once might no longer be feasible. The city declared a staggered lockdown that closed nonessential businesses, halted public transportation and confined the majority of the population to their homes.

The measures split the city in half, first closing the eastern section for a five-day quarantine starting Monday, before turning to a similar shutdown in the western portion. Shanghai’s caseload of 3,500 on Monday was tiny compared with much of the world, but it has been driven by the highly transmissible Omicron variant. Officials said the lockdown would enable the authorities to conduct mass testing.

China has been grappling with the country’s largest outbreak since the pandemic began in Wuhan more than two years ago. The government’s fear is that an uncontrolled spread could overwhelm hospitals and cause a catastrophic loss of life. Large numbers of Chinese adults 80 and older are unvaccinated, and there is little immunity from earlier infections. Hong Kong’s struggle to contain a Covid outbreak has offered a glimpse of what that might look like: Deaths there spiked in recent weeks, particularly among unvaccinated older adults.

“The challenge is that lockdowns and nucleic testing demand manpower and medical resources in addition to their impact on the economy and life in general,” said Dali Yang, a professor of political science at the University of Chicago.

“The leadership is trying hard to continue the current practices but are also assessing. But Omicron may very well force the hand of the leadership” to abandon its unsustainable reliance on lockdowns, he said. The government has been working on administering vaccine boosters for the elderly and buying anti-viral drugs to prepare for such a scenario, he said.

The central government is still pushing officials across the country to stamp out the virus, deploying measures that are among the world’s strictest, including isolating anyone who tests positive and enforcing quarantines on people deemed at risk of infection. White-collar employees, shoppers and diners have been forced to isolate inside offices, stores and restaurants if they were deemed to be close contacts. People who test positive are sent either to hospitals or to government isolation facilities set up in schools, exhibition centers and other spaces.

In Shanghai, though, signs abound that the policy, and the populace, are stretched thin.

Ivy Sun, a 32-year-old counselor, had been looking forward to freedom after being held in her home under a five-day lockdown on her neighborhood. On Sunday, after the announcement of the citywide closure, she was suddenly allowed a breath of fresh air, but just for seven hours. She and her neighbors rushed out to get groceries and other supplies for yet another confinement.

“It felt like an apocalyptic scene. Everyone ran out. A lot of people were on the streets near the neighborhood, and all the stores were filled with people,” Ms. Sun said.

Ms. Sun said that during her first lockdown, she couldn’t get groceries online because they sold out quickly. She and her neighbors got together and began buying necessities in bulk. She also wondered whether the panic-buying on Sunday, in which people crammed together inside enclosed stores, could have worsened the spread of the virus.

In other cases, the unpredictability of the restrictions and seemingly indefinite confinement triggered protests. In central Shanghai, around two dozen residents of Jinghua Xinyuan, an apartment complex, crowded in front of a marble and metal security gate that was locked to prevent them from leaving.

“We want to get out,” several residents shouted at police officers posted outside on Sunday afternoon, according to a video posted to Weibo that day and verified by The New York Times.

The authorities had locked residents in the compound for three days, yet did not administer Covid tests even though some people had the virus, according to residents’ accounts posted online. They had given conflicting messages about how long this would go on, the residents complained.

“The day before yesterday, they told us the 14-day lockdown had started. Yesterday, they said that the 14 days started yesterday, and today they said it started today,” shouted one man who wore a black cap and a sweatshirt. “Am I on a cruise at sea or what?”

Calls to the neighborhood committee and the management office of the complex rang unanswered on Tuesday. A duty officer who answered the phone at the Xuhui district police station denied that there had been a protest.

While the authorities have been quick to enforce isolation and home quarantine on residents, they have lagged in ensuring that all those in confinement can get help for serious medical conditions. Many residents have resorted to going online to beg for access to treatment such as dialysis.

Luker Dong, a resident in Pudong, said that his 73-year-old father suffered from uremia — a buildup of toxins in the blood — that required him to get hemodialysis at a hospital three times a week. But he has been forced to go without treatment for four days since his building went under lockdown, Mr. Dong said.

Hospitals also would not accept his father, citing concerns about the outbreak, and the health authorities have not helped, he said. His father’s feet had swollen without the dialysis, which helps to filter waste and water from his blood.

“If his organs fail, it will be too late,” Mr. Dong said in a telephone interview. Mr. Dong has posted calls for help on his Weibo page, saying on Monday: “I cannot just watch my father wait for his death at home.”

Shanghai’s top health authorities have said that hospitals should ensure people who require treatments like dialysis and chemotherapy can get help while in lockdown. But cases like that of Mr. Dong’s father exposed gaps in the system.

Such scenes and complaints were common in Wuhan and the province of Hubei when the outbreak first emerged because the health care system there was quickly overwhelmed. In Shanghai, where hospitals are among the country’s best, accounts of residents being denied treatment because of Covid measures have similarly stirred widespread anger and grief.

Last week, a nurse suffered an asthma attack but couldn’t get help from the emergency department at the hospital where she worked because it was closed for Covid disinfection. Her family rushed her to another hospital but she died, according to a statement from Shanghai East Hospital, her employer.

On Friday, officials from Shanghai’s health commission expressed condolences to the nurse’s family. They urged hospitals to speed up infection screening, contact tracing and disinfection protocols to minimize disruptions to normal medical services.

Still, Feng Wenliang, a reporter at the state-run China Food Security Newspaper, described the nurse’s death as shameful. “This slap was extremely loud,” he wrote on his social media account.

“It has been three years since the pandemic, for such a thing to happen in Shanghai, which is at the forefront of national prevention and control,” he added. “Their own nurse was sick, and the hospital where she worked refused to accept her.”

“She was a nurse, but even more a patient.”