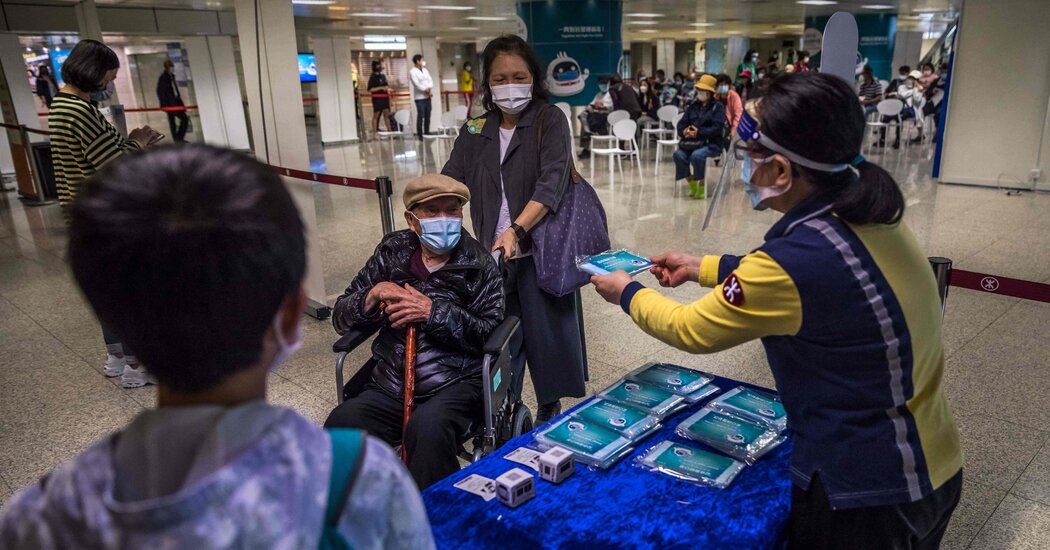 Two doses of China’s Sinovac vaccine offered older people only a moderately high level of protection against severe disease and death from Covid-19, but a third dose significantly bolstered their defenses, according to a new study by scientists in Hong Kong.

The study, based on patients infected during the current devastating Omicron wave in Hong Kong, serves as a cautionary note for mainland China, where Sinovac is a pillar of the country’s vaccination program. Many older people there have yet to receive booster shots.

A Sinovac booster shot helped considerably, proving to be 98 percent effective against severe or fatal Covid among people at least 60 years old, the study found.

Yanzhong Huang, a global health expert at the Council on Foreign Relations, said that the results highlighted the urgency for mainland China to accelerate its lagging booster campaign. “There’s a lot of work for the government to do to make sure this segment of the population receives the booster shots,” he said.

The study’s authors, who are scientists at the University of Hong Kong, noted that the city’s booster program began just recently, making it difficult to determine how long protection from a third dose would last.

Because people with underlying health conditions in Hong Kong were more likely to resist getting vaccinated, they said, it was also possible that those who chose to be vaccinated or boosted were healthier in the first place, inflating estimates of how protective the vaccines initially were.

Sinovac, a private Chinese company that makes the vaccine, is one of two manufacturers of Covid shots available in China. Vaccines using mRNA technology, like those made by Pfizer-BioNTech and Moderna, are not available there.

The new study highlights the potential consequences for China, which has relied heavily on Sinovac and is battling its biggest Covid outbreak in two years. More than 87 percent of China’s population has been vaccinated. But just over half of people 80 and older have had two shots, and less than 20 percent of people in that age group have received a booster, Zeng Yixin, a vice minister of the National Health Commission, said recently.

The new study from Hong Kong received funding from the Chinese Center for Disease Control and Prevention as part of what one of the study’s co-authors described this week as an effort to understand the comparative effectiveness of vaccines. It was posted online as a preprint, but has not yet been vetted by peer scientists for publication in a scientific journal.

Sinovac’s vaccine performed similarly to Pfizer’s among younger people, even without a booster dose, the study found. In people younger than 60, two Sinovac doses were roughly 92 percent effective against severe or fatal Covid, whereas two Pfizer doses were about 95 percent effective.

Neither vaccine provided very much protection against mild or moderate Covid, though Pfizer’s offered more than Sinovac’s and a booster dose considerably lifted levels of protection. During the latest wave, people in Hong Kong have largely been infected by the subvariant of Omicron known as BA.2. Like other versions of Omicron, BA.2 has infected many vaccinated people.

The Hong Kong wave is killing people at a rate exceeding that of almost any country since the coronavirus emerged — a result, in large part, of low vaccination rates among older residents. Almost 90 percent of people who died during the latest wave were not fully immunized, suggesting that getting shots to the most vulnerable is more important than the particular brand of vaccine.

Like Hong Kong, mainland China had largely succeeded in tamping down transmission of the virus before Omicron, leaving its population with very little immunity from previous infections.

Beyond China, Sinovac vaccines have also been critical in protecting people against severe Covid, especially in poorer countries. The vaccine is being used in 49 countries, including in South America and Africa.

But concerns about the protection it offered had already prompted the World Health Organization to recommend in October that recipients 60 and older get a third dose.

Dr. Andrew Morris, an infectious disease specialist at Sinai Health and University Health Network in Toronto, who was not involved with the Hong Kong study, said that the results fit with lab studies suggesting that Sinovac generated lower levels of neutralizing antibodies than mRNA vaccines, like Pfizer’s.

“I think what we’ll see is in countries that have relied heavily on Sinovac, if they don’t have boosting — especially with an mRNA booster, or even with Sinovac — they’re probably going to struggle with high rates of infection with this latest BA.2 wave,” he said.

Dr. Morris said that the results in Hong Kong, like those from other vaccine studies, were also highly dependent on how long it had been since people were administered the shots. Protection tends to weaken over time.

The results from the latest study about the effectiveness of third Sinovac doses might be taken as an encouraging sign by Chinese leaders that Chinese-made vaccines could remain the focus of their immunization campaign, said Dr. Huang, of the Council on Foreign Relations.

“Now, for the Chinese leaders, they don’t need to face a strong pressure to approve BioNTech’s vaccine,” he said.