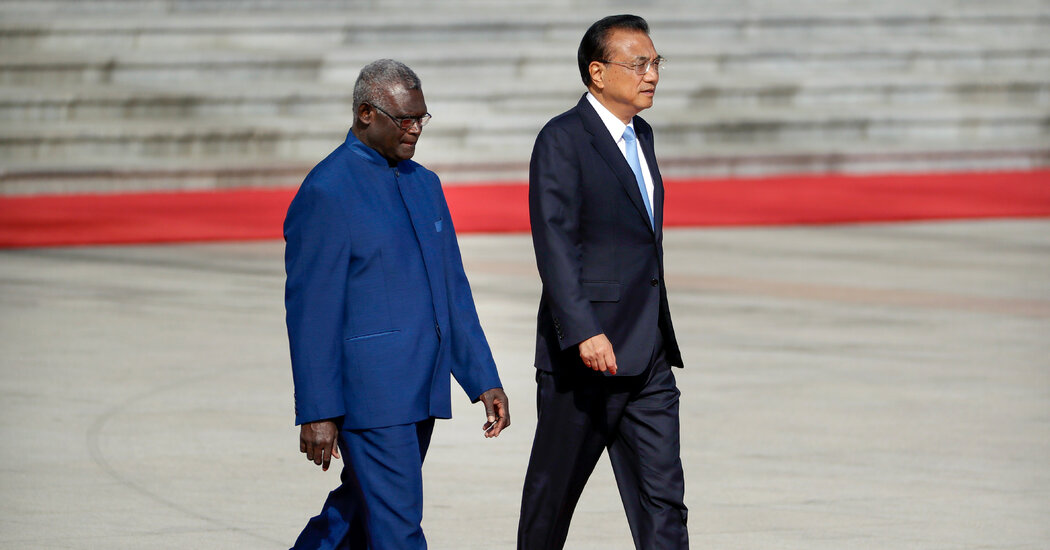 MELBOURNE, Australia — In a fiery speech confirming that the Solomon Islands has drafted a security agreement with China, the island nation’s leader said on Tuesday that the deal was “ready for signing” and criticized as “insulting” concerns from Australia and New Zealand that the pact could destabilize the region’s security.

Prime Minister Manasseh Sogavare’s remarks to Parliament marked the first time he had addressed the leak last week of a draft of the security agreement. The draft — which was shared by opponents of the deal and verified as legitimate by the Australian government — spurred alarm in a region where concerns about China’s influence has been growing for years.

The draft suggests that Chinese warships could flow into the nation or Chinese troops could intervene domestically on the island in times of crisis — putting them on Australia’s and New Zealand’s doorstep.

The leaked document stated that “Solomon Islands may, according to its own needs, request China to send police, armed police, military personnel and other law enforcement and armed forces to Solomon Islands to assist in maintaining social order, protecting people’s lives and property.” It required secrecy, noting, “Neither party shall disclose the cooperation information to a third party.”

In his speech, Mr. Sogavare blasted those who had leaked the draft deal as “lunatics” and “agents of foreign interference.” He said that the pursuit of “liberal hegemony” had failed and criticized foreign powers for assuming that the Solomon Islands could not act in its own best interests.

Mr. Sogavare declined to provide more details about the contents of the deal, which he said had been finalized, but added that he had not been pressured by Beijing and had “no intention to ask China to build a military base in Solomon Islands.”

He insisted that it was “utter nonsense” to say that China posed a security threat in the Pacific. “We find it very insulting,” he said, “to be branded as unfit to manage our sovereign affairs or have other motives in pursing our national interests.”

He said that the needs of the Solomon Islands were beyond what could be provided by one partner nation. The Solomon Island’s foreign policy strategy was to be a friend to all and enemy to none, he said, and it would not be drawn into any geopolitical conflict.

But Matthew Wale, the leader of the opposition party in the Solomon Islands’ Parliament, said he feared that the agreement could be used for anything. He added, “It has nothing to do with the national security of Solomon Islands.”

Prime Minister Jacinda Ardern of New Zealand said, “We see such acts as the potential militarization of the region.”

The Australian authorities expressed concerns about its potential to lead to the creation of a Chinese military base, and Prime Minister Scott Morrison lobbied Papua New Guinea and Fiji in phone calls on Monday to apply pressure to have the deal scrapped.

In a daily briefing on Monday, Wang Wenbin, a Chinese foreign ministry spokesman, dismissed concerns about the agreement, saying, “Relevant countries should earnestly respect Solomon Islands’ sovereignty and its independent decisions instead of deciding what others should and should not do self-importantly and condescendingly from a privileged position.”

Australia has been losing influence in the Solomons and wider region for years. The smaller Pacific nations have long complained about “Australia demonstrating condescension, paternalism and generally a lack of respect,” said Tess Newton Cain, project lead of the Pacific Hub at Griffith University in Australia.

Marriages and divorces. Faced with a soaring divorce rate, China introduced a rule forcing married couples to undergo a 30-day “cooling off” period before formally parting ways. The move seems to have been effective at reducing divorces, but is unlikely to help with a demographic crisis fueled by a decline in marriages.

Australian leaders have previously joked about rising sea levels in Pacific nations and said that nations would survive climate change because their workers “pick our fruit.”

Mr. Sogavare has long telegraphed his country’s shift to China. In 2019, he said the island would end its 36-year diplomatic relationship with Taiwan, the self-governing island that China claims as its own, in order to establish official ties with Beijing.

The alarm set off by the security agreement shows that countries like the United States needs to engage more deeply with the region, said Mihai Sora, a research fellow at the Lowy Institute and a former Australian diplomat stationed in the Solomon Islands.

“What Pacific Islands have been saying for many years as the reason they’re looking beyond these traditional partnerships like Australia is they’re not looking for more aid; they’re looking for economic relationships, and that’s a narrative China has been able to deliver much more convincingly,” he said.

Last month, during a visit to Fiji, Secretary of State Antony J. Blinken announced that the United States would open an embassy in the Solomon Islands after closing one in the 1990s.

Dr. Cain, the Griffith University professor, said of Mr. Sogavare: “He is the latest in a number of Pacific Island leaders who have made it quite clear that whilst they recognize there may be great power contestation going on and those great powers may or may not have waxing and waning interest in the region, they see the region as a region of peace.”

“They do not see themselves as prizes to be fought over, and they don’t wish to pick or take sides.”