Some Ukrainian Refugees Are Returning Home, Despite the Risks 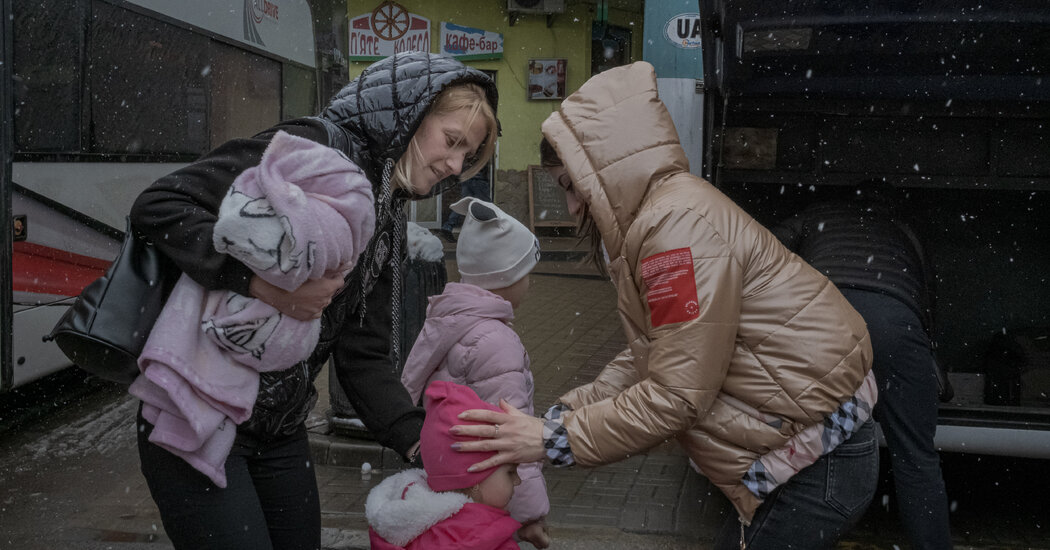 Some Ukrainian Refugees Are Returning Home, Despite the Risks

LVIV, Ukraine — From her bearing and demeanor, the college instructor waiting at the Lviv bus station appeared to be accustomed to respect and, judging by her fur-trimmed coat and pink mohair hat adorned with a sparkling pin, used to a certain elegance.

But after two weeks on the road as a refugee with her daughter and 1-year-old grandson, she had had enough.

In Poland and the Czech Republic, Oksana, who did not want to give her last name, said she was just another refugee in a shelter who did not speak the language.

“Nobody needs us,” she said. “Nobody needs teachers. Knowing the Czech language is obligatory. They would be ready to take me as a cleaning lady, but even then I would need to find a place to live.”

Now she and her family were joining the growing number of Ukrainians who were returning home.

For the first time since the Russian invasion six weeks ago, an increasing number of travelers coming through the western Ukrainian city of Lviv and other transit hubs are returning home rather than fleeing.

There are still far more citizens leaving their homes. But according to travelers and officials, the surge in returnees reflects a growing belief that the war could last years, and a willingness to live with a measure of danger rather than live as a refugee in another country, bereft of home and community.

It also highlights the difficulties European countries have had providing for Ukrainians in the continent’s biggest refugee crisis since World War II.

“The statistics have changed a lot recently,” Yurii Buchko, the deputy military administrator for Lviv, said in an interview. “In the beginning of the war 10 times the number of people left as those who returned.” Now, he said, on some days half of those crossing the border in Lviv Province were returning home rather than leaving.

The returnees are largely women and children. Most Ukrainian men of military age with fewer than three children were banned from leaving the country at the start of the war. At the border with Poland, virtually all the drivers of civilian cars crossing the border are women. The trains and bus stations are packed with women and children.

“People have now understood what war is like and that even with war, you can stay and live in Ukraine, in Lviv,” Mr. Buchko said. “They left at the beginning because of the panic, but they have family members still here.”

He said Ukrainians were also returning to go back to work as more shops and businesses reopened.

On Saturday, a fairly typical day, 18,000 Ukrainians left the country, while 9,000 crossed back again through border posts in his province, he said. He said that while some were traders transporting goods, many were Ukrainian families intending to go home. Figures from Ukraine’s border guard confirm the trend.

More than four million Ukrainians have fled the country since the war began, and more than seven million have fled their homes but remained in Ukraine.

Many who stayed in the country had evacuated to Lviv and to other cities and towns closer to the Polish border, which were thought to be safer than cities in the south and east.

Recent rocket attacks in Lviv, including on a military training base and an oil installation, killed several dozen people but for the most part the city has remained untouched.

Travelers and officials said that some people were returning to the capital, Kyiv, because of the Russian retreat there.

At Lviv’s ornate century-old train station, Valeria Yuriivna stood on the platform about to board a train to Mykolaiv, which remains under heavy fire from Russian airstrikes. Her 14-year-old daughter and their dog were already on the train. Her eldest daughter was waiting for her at home in Mykolaiv.

Ms. Yiriivna, a government employee, said they had been terrified by Russian shelling, which shook their apartment building. But she said it had been difficult staying with friends in Lviv with her daughter and dog for an entire month.

“They have been bombing hospitals in Mykolaiv,” she said. “They need people to help, to cover the windows with blast film. I am going back to volunteer.”

She and others said they were worried that something would happen to the railway, preventing them from getting home.

When an air-raid siren sounded at the train station late Monday night, a crush of travelers headed underground to await the all-clear sign: weary mothers dragging suitcases while holding crying children, city dwellers with small dogs in their arms, an opera singer returning from a concert in Poland.

Most of the frequent air-raid sirens in this historic city mark the presence of Russian fighter jets heading for targets in eastern Ukraine.

Yurii Savchuck, a conductor, directed passengers to their train cars. A medical team ran frantically up the stairs carrying a frail older woman in a wheelchair, rushing to get her on the train in time.

U.N. meeting. President Volodymyr Zelensky of Ukraine addressed the United Nations Security Council, detailing the horrors he saw in Bucha, the Kyiv suburb where Russian troops have been accused of killing civilians, and laying out a powerful indictment of the U.N.’s failure to prevent the invasion.

On the ground. As Russian forces have retreated around Kyiv, Ukrainian and Western officials said that Russia appeared to be positioning troops for an intensified assault in the eastern Donbas region, where the port city of Mariupol remains under a brutal siege.

“For the last couple of days more people have been going home,” said Mr. Savchuck, a 20-year veteran of the Ukrainian railroad. “Not everyone has the money to stay abroad for long. Also Kyiv was liberated and people want to see if their houses are destroyed.”

At the headquarters of Lviv’s military administration, Mr. Buchko and his staff emerged from a bunker after the latest all-clear. More than a month into the war, the sirens were so routine that employees were sitting on benches chatting, sharing jokes and talking on their phones. He and other officials were making plans to reopen more businesses so more Ukrainians could return and get back to work.

“At the beginning of the war, we were understanding or hoping that this war would last for a week or probably a few days,” he said “Right now we see that it’s going to last not for months probably, but for several years. And we have to live with that.”

At the bus station on Sunday, Oksana and her family were trying to find a taxi to the train station to go to their home to Dnipro, in eastern Ukraine, despite the fact that it has recently been hit by Russian missiles. But life as a refugee seemed worse.

“We were roaming for more than two weeks,” Oksana said. “From Poland to the Czech Republic then back to Poland and then here.”

“We were staying in a small center in the Czech Republic,” said her daughter Halyna, who is also a college instructor. “You need to do everything for yourself and everything is in Czech so you can’t understand it.”

In Poland they moved into a hotel after living in a shelter for two days but then ran out of money.

“It was difficult,” Halyna said. “Everyone was in the same room. Poland especially was very helpful with food and other things but we had no place to live.”

Others arriving by bus from Poland said the Poles had been very welcoming but were overwhelmed by the number of people arriving.

“Everyone there wants to come home,” Oksana said.