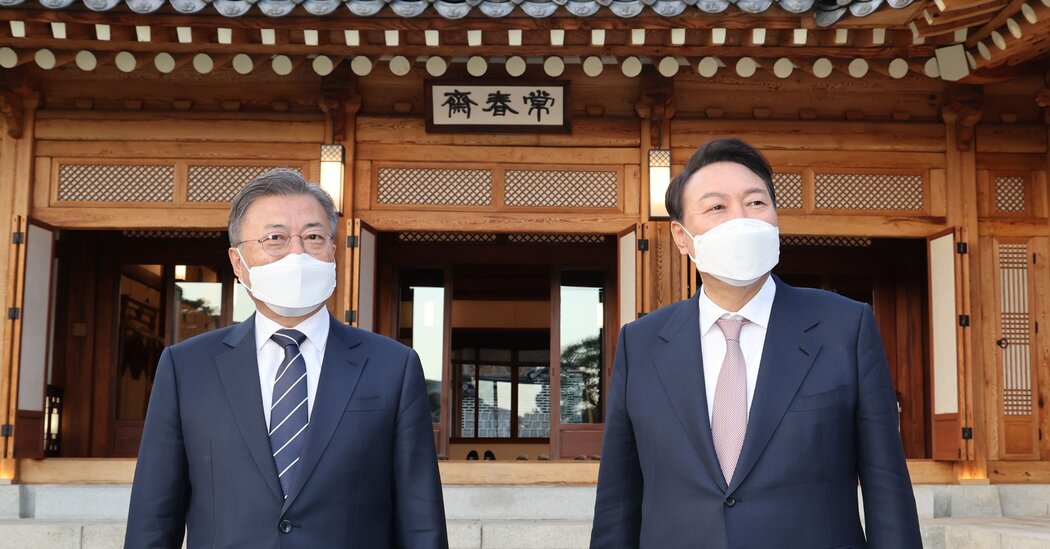 SEOUL — The video footage and photos captured their final moments in South Korea: two North Korean fishermen taken against their will to the border. One of them was so resistant to being deported to North Korea that South Korean officials had to drag him. The other appeared resigned to his fate.

The case triggered outrage back then, because it was the first time South Korea rejected a North Korean request to defect and forced someone back across the border unwillingly. In releasing new material, the conservative government of President Yoon Suk-yeol has revived the issue, accusing his predecessor’s government of violating human rights.

“The essence of the case is that the fishermen fleeing North Korea were returned there to their death, as the North wished, when they should have been accepted into South Korea and dealt with in accordance with our​ own law,” said Choi Young-bum, Mr. Yoon’s chief spokesman. Mr. Yoon’s office has called the case a potential “crime against humanity.”

The accusations against the government of Moon Jae-in, Mr. Yoon’s predecessor, are part of a recurring pattern in South Korea, where previous leaders have often been ensnared by investigations after leaving office. Of the four former presidents who have governed the country in the past two decades, one — Roh Moo-hyun — killed himself while being investigated for possible corruption. Two — Lee Myung-bak and Park Geun-hye — ended up in prison for corruption.

A group of conservative lawyers are now asking prosecutors to investigate Mr. Moon for murder and abuse of power in the case of the two North Koreans. If the prosecutors act on the​ request, Mr. Moon will become the latest ex-president ​to face a criminal inquiry in South Korea.

“It’s the beginning of ‘politics by other means,’” said Ahn Byong-jin, a political scientist at Kyung Hee University in Seoul.

Mr. Moon’s opposition Democratic Party, in turn, has accused Mr. Yoon, who served as prosecutor general under Mr. Moon​, of revisiting the case to distract from the president’s falling approval ratings and to cast doubt on Mr. Moon’s legacy. Many of Mr. Moon’s former top aides who were involved in the case of the two North Koreans are already under investigation by prosecutors.

Going after his predecessor ​could be a political gamble for Mr. Yoon. When Mr. Moon left office in May, his approval ratings were higher than Mr. Yoon’s are this month.​

Mr. Yoon, who won ​the election by a razor-thin margin, has recently seen his approval ratings dip to around 33 percent amid deepening anxiety over rising consumer prices and a host of scandals involving ​his cabi​net appointees,​ his ​presidential staff and ​his wife, Kim ​Keon-hee. This month the president denied ​a political motive, saying that inquiries into past governments have been routine in South Korea.

Since taking office, Mr. Yoon has forged ahead with reversing some of Mr. Moon’s key ​policies.

He has ordered his government to start building nuclear power plants, throwing out Mr. Moon’s plan to phase out nuclear energy. He is working to reduce real-estate taxes Mr. Moon introduced to contain housing prices. His government ​has also moved to mend ties with Japan that had frayed under the previous administration.​

The aggressive effort to undo Mr. Moon’s policies could fuel domestic tensions at a time when ​South Korea desperately needs bipartisan support to manage a cooling economy and to help Washington contain North Korean threats. “A less divided South Korea could also be a more effective ally to the United States,” said Leif-Eric Easley, a professor of international relations at Ewha Womans University in Seoul. “But paths to domestic unity are narrowing​.”

Along with that of the two North Korean men, Mr. Yoon is also drawing attention to a case from 2020, when a South Korean fisheries official disappeared from his ship and was later found in North Korean waters. South Korea accused the North of killing the official and burning his body at sea. It said at the time that the official, Lee Dae-joon, was trying to defect.

Under Mr. Yoon, the ​South Korean ​Coast Guard reversed its conclusion last month, saying it found no evidence that the official was trying to ​​defect. Mr. Yoon’s governing camp said the Moon government portrayed the official as a defector in order to mitigate the outcry over his killing and to rescue Mr. Moon’s flagging efforts for dialogue with North Korean leader Kim Jong-un.

In the 2019 episode, South Korean officials said then that the two North Koreans were on the run after “murdering” the captain and 15 other fishermen in a high-seas mutiny when their boat was captured by South Korean navy commandoes. Mr. Moon’s government considered them neither defectors nor refugees, ​but “heinous criminals” who should be returned to North Korea.

​Mr. Yoon’s aides say that the two North Korean men should have been accepted as defectors since, according to South Korea’s Constitution, all Koreans should be treated as equal citizens. They said the men should have been tried in a South Korean court or at the very least been granted a hearing and a chance to appeal the government’s decision to deport them to the North, where many experts believe they were executed.​

“The two men’s desperate resistance to being forced back that is so apparent in those photos shows that they understood they were fighting for their lives,” said Phil Robertson, deputy Asia director for Human Rights Watch. “Moon Jae-in and his officials knew that too, and yet still they sent them back in what was a disgusting and callous disregard for human rights.”

Last week, prosecutors raided the office of the National Intelligence Service; the agency has accused two former directors who served under Mr. Moon of ​ordering a premature end to the 2019 investigation and of ​destroying intelligence on the killing of the South Korean fisheries official.

Mr. Moon’s office said that the former president had no comment.

Mr. Moon’s former top aides, as well as his Democratic Party, which holds a ​parliamentary ​majority, said that intelligence gathered from the intercepted communications of the North Korean military ​had ​made it clear in 2020 that the fisheries official was trying to defect to the North. In the other case, they called the two North Korean men “macabre murderers” who ​would have been a threat to South Koreans.

Even if the two were tried in ​a ​South Korea​n court​, prosecutors would have had no choice but to let them walk because all criminal evidence was in North Korea, said Youn Kun-young, a senior presidential aide under Mr. Moon who is now a lawmaker.​ Both men, he said, had confessed to the crime.