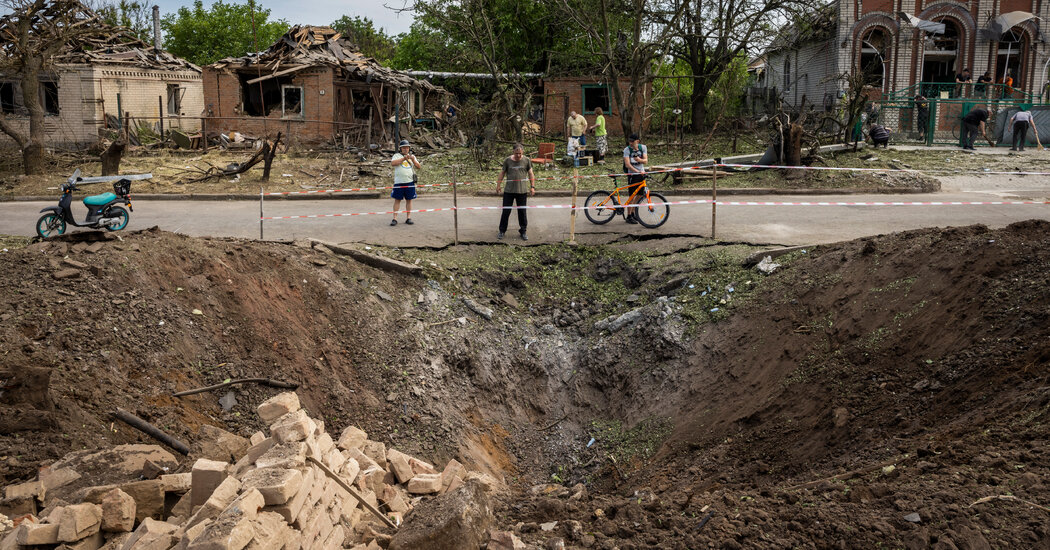 KYIV, Ukraine — Russian forces pressed hard on Sunday to take the town of Sievierodonetsk, one of the last obstacles to seizing the region of Luhansk. But as so often in this grinding war of attrition, the Russian Army is finding the going difficult, with Ukrainian forces making counterattacks and seizing back some of the town.

President Volodymyr Zelensky of Ukraine, who said he visited frontline troops near Sievierodonetsk on Sunday, said that fighting was being waged street by street and that the situation was “extremely difficult.” The city is largely in ruins, and thousands of civilians are still sheltering in basements there.

Capturing Sievierodonetsk would deliver the Luhansk region to Russian forces and their local separatist allies, who also control much of neighboring Donetsk. But their inability to take ground quickly and their persistent vulnerability to determined Ukrainian fighters again show that the Russian war plan has not gone according to Moscow’s expectations.

Even as it struggled in the east, Moscow offered a reminder Sunday that it retains the power to lash out in much of Ukraine, hitting Kyiv, the capital, for the first time in more than a month. President Vladimir V. Putin of Russia, angered by the impending arrival in Ukraine of long-range missiles from the West, warned that Moscow may hit hitherto unscathed targets.

Even in the majority Russian-speaking areas of eastern Ukraine, the brutality of the Russian campaign — employing what Mr. Zelensky called “constant airstrikes, artillery and missile fire” — has produced fierce resistance, lasting anti-Russian feelings and a new Ukrainian nationalism.

Serhiy Hadai, the governor of the Luhansk region, said on Sunday that Ukrainian forces had taken back about half of Sievierodonetsk, an assertion that was hard to verify. He said he looked ahead to getting more supplies of Western longer-range artillery and missile systems that would be better able to hit the masses of Russian artillery that are pounding Ukrainian positions from afar.

“As soon as we have enough Western long-range weapons, we will push their artillery away from our positions,” Mr. Hadai said. “And then, believe me, the Russian infantry, they will just run.”

But even if they do not run, Russia is making only slow, bloody progress in even its more limited aims in the east, having failed to take Kyiv, Kharkiv or the key southern port of Odesa.

The prospect of these more modern, more accurate long-range weapons has clearly caught the attention of Mr. Putin. In portions of an interview released on Sunday, he threatened “to strike targets we haven’t hit before” if Western countries supply Ukraine with longer-range missiles, but he provided no specifics.

Speaking to the state-run Rossiya TV network, Mr. Putin was asked about the U.S. announcement that it would supply Ukraine with a more sophisticated rocket system that could strike targets some 40 miles away. Even as he warned about new Russian targets, he sought to play down the rocket deliveries, suggesting that Western nations were just replenishing stocks of similar weapons that Ukraine had depleted.

Russia has been irritated by the U.S. decision to supply Ukraine with HIMARS truck-mounted multiple-launch rocket systems, with missiles that have a range of up to 40 miles, greater than anything Ukraine currently possesses. Since the invasion, the Pentagon has provided Ukraine with 108 M777 howitzers. But the range of the HIMARS missiles is more than twice that of the 155-mm shells fired by howitzers.

“All this fuss around additional deliveries of weapons, in my opinion, has only one goal: to drag out the armed conflict as much as possible,” Mr. Putin said.

As the war proceeds without evidence that an end may be near, Kyiv was hit by Russian missiles early on Sunday for the first time in five weeks, denting its sense of relative safety. At least five missiles hit near the Darnytsia railway station and Pozniaky, a residential neighborhood, wounding one person.

Russia’s Defense Ministry claimed that the missiles had struck a railway repair workshop and destroyed an unspecified number of Soviet-era T-72 tanks delivered by Eastern European nations. Poland and the Czech Republic have sent hundreds of such tanks to Ukraine. Ukrainian officials denied that any tanks had been destroyed.

“I officially declare that there is no military equipment on the territory of the Darnytsia Car Repair Plant,” the head of the board of Ukraine’s railway company, Oleksandr Kamyshin, wrote on Telegram. “This plant repaired gondola cars and grain trucks, which we use for export.”

It was impossible to verify either claim, but for Ukraine, its ports blocked in the east, grain trucks might be the only way left to get its badly needed food stocks out to the world. On Sunday, The New York Times reported that the United States was warning foreign governments that Russia was trying to sell plundered Ukrainian grain to countries desperate for food.

There were also several powerful explosions early Sunday in the eastern city of Kramatorsk, rattling windows miles away. Kramatorsk, which serves as the provincial capital for Ukrainian-controlled areas of the Donetsk region, has been repeatedly struck by missiles but has escaped the sweeping destruction in other towns. There were no reports of injuries in Sunday’s attack, which hit industrial areas.

How Mr. Putin and Mr. Zelensky decide when to resume negotiations, and on what basis, continues to be a significant issue of debate. President Emmanuel Macron of France was sharply criticized by Ukrainian officials and some fellow European leaders when he repeated his view on Saturday that Mr. Putin should not be humiliated, so that a negotiated solution to the conflict could be more easily reached.

“We must not humiliate Russia so that the day the fighting stops, we can build a way out through diplomatic channels,” Mr. Macron said. The role of France, he said, is to be that of “a mediating power,” adding that he had put “time and energy” into ensuring the conflict did not escalate into a wider war, including negotiating with Mr. Putin for more than 100 hours.

The fallout from that interview with regional newspapers continued on Sunday, with Ukrainian and Central and Eastern European politicians saying essentially that Mr. Putin had already humiliated himself and that he must be seen to have failed in Ukraine to ensure that Russia does not resume the war at a later stage, or even decide to broaden it to other countries.

Others suggested that Mr. Macron’s hours of talks with Mr. Putin had produced little of value, that the war was not yet ripe for negotiations and that France had disqualified itself from a mediating role.

There are clear divisions between countries like Poland and the Baltic nations, which experienced Soviet occupation and see greater dangers in a Russia that is not soundly defeated, and Western European countries like France, Germany and Italy, which support Ukraine but are hurting from rising inflation and economic sanctions against Russia, and want the war to end more quickly through negotiations.

Gérard Araud, a recently retired senior French diplomat, said in a Twitter message that talk of humiliation was not the point. The real question, he said, is: “How to defeat Russia while offering it a way out? To avoid an everlasting war, the temptation of escalation and the total devastation of Ukraine.”

“The word ‘humiliate’ is giving to the debate an emotional and moral tone which is a dead end,” he said. “In foreign policy, at the end of a war, there are a winner and a loser or, which is much likelier in this case, there is a stalemate. A stalemate means an ever-going war or a compromise.”

Helene von Bismarck, a German historian, said that what was most annoying about Mr. Macron’s talk of humiliation “is not just that it sounds callous, after Bucha, but that it is yet another example of discussing the long-term relationship with Russia as if it wasn’t influenced by the short-term development of the war.”

But the strain of the long war was evident even in Estonia, whose prime minister, Kaja Kallas, has been one of the most outspoken voices urging a Russian defeat and Mr. Putin’s isolation.

Ms. Kallas dissolved her coalition government on Saturday, firing seven Centre party ministers from the 15-strong cabinet, including the foreign minister, Eva-Maria Liimets. The dismissal of the Centre ministers followed weeks of political deadlock, including a vote on an education bill in which Centre voted against the government and with a far-right opposition party.

Ms. Kallas, who is seeking to create a new coalition to avoid early elections, cited the need for unity during this war to explain her actions. She said she hoped that the war “would have opened the eyes of all the parliamentary parties to the importance of a common understanding of the threats for us as a country neighboring Russia.”

Valerie Hopkins reported from Kyiv, and Steven Erlanger from Brussels. Reporting was contributed from Andrew E. Kramer from Kramatorsk, Ukraine; Neil MacFarquhar from Istanbul; and Ivan Nechepurenko from Tbilisi, Georgia.