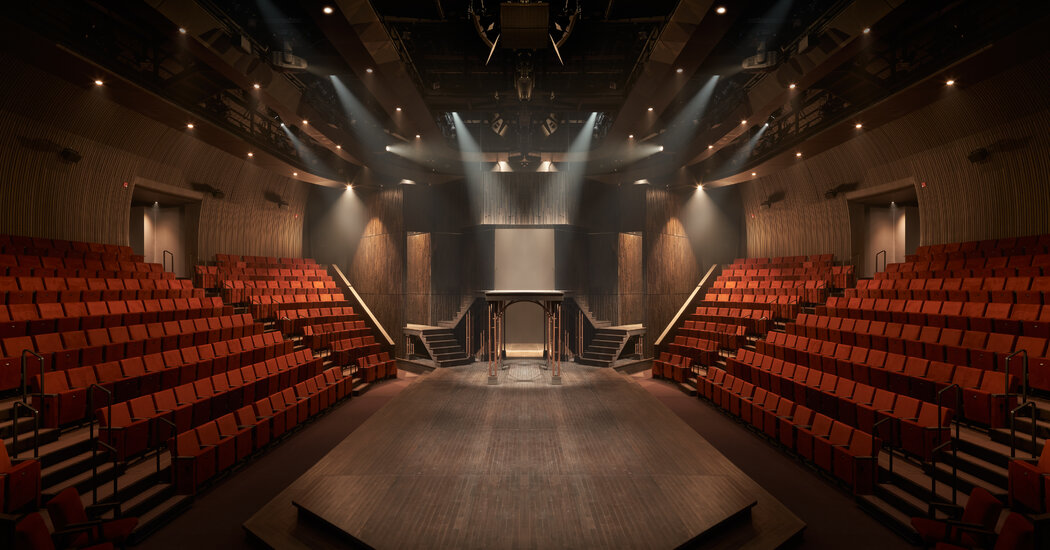 Jesse Green, the chief theater critic for The New York Times, has just returned from the Stratford Festival in Ontario, where the 2022 season started with the opening of a new theater.

Leaving aside the plays themselves, the most dramatic presences at the new Tom Patterson Theater may in fact be absences. The usual whir of swiveling lights and the endless whoosh of moving air that infiltrate most theaters are undetectable here. Likewise, the blackouts are fully black — just the kind of inky dark to set the mood for “Richard III,” the play that opened the glamorous new building at the Stratford Festival in June.

I got a tour of the theater, which cost 72 million Canadian dollars, during a six-day, five-show visit last week. Greg Dougherty, the Patterson’s technical director, led me from the depths of the traps beneath the stage — useful for drownings, burials and the like — to the catwalks high above it. The various noise abatement measures, most notably air handlers that look like space capsules and take up a room the size of a playing field, reduce the ambient sound to 10 decibels, Dougherty told me, similar to that of a recording studio.

That’s a lot of silence. I understood its real value at that evening’s “Richard III” performance, in which Colm Feore, as the title character, delivered the play’s famous first line — “Now is the winter of our discontent/Made glorious summer by this son of York” — in what he later told me had been a whisper. No need to project, let alone overact, here; I heard him as clearly as if he were sitting next to me.

Next to me is not a place I would usually want to find the evil king — except for dramatic purposes. But that kind of intimacy is part of the inheritance of the new Patterson, built on the site of the old one, a building that had previously been a curling rink, a dance hall and a badminton club, with all the charm of a Quonset hut. Despite that, its long thrust stage was much beloved, at least by actors, bringing them uncommonly close to audiences. To create that intimacy, though, the 480 seats (575 when configured in the round) were so steeply raked that finding mine when I first saw shows there in 2017 felt like an Alpine event.

By 2019, the old Patterson was gone. That summer, Antoni Cimolino, the festival’s artistic director, took me on quite a different tour, of a campus under construction. Though it was the only time I’ve worn a hard hat on the job, it wasn’t the only time I could have used one.

The building, then a skeleton, was already mammoth. The auditorium, a kind of enclosed fortress, was beginning to take shape, but the surrounding public foyers and event facilities, which mimic the eddies and bends of the Avon River directly across Lakeside Drive, were as yet difficult to discern among the girders. I was concerned that, like so many new performance spaces built in the last half-century, the new Patterson would be blandly luxurious, deferring more to art donors than to art.

I planned to find out in 2020, but by then the coronavirus pandemic had shut down almost all theater in North America, including Stratford. When I finally returned last week, I was wearing a mask instead of a hard hat. (Masks are strongly encouraged but not required.) I saw both shows running then at the Patterson — “Richard III” and “All’s Well That Ends Well” — and participated in five discussions and interviews in Lazaridis Hall, one of the event spaces. I admired the sensuous materiality of the undulating brass-and-glass facade, the riverine expanse of white oak floor, the roughness of the pale brick girdling the auditorium. I noted the whiz-bang electronic screens as well as the sparkling and seemingly infinite bathrooms.

But those you can get anywhere. What makes the Patterson the best new theater I’ve seen in years is the clear prioritization of the theater itself, which sits like a treasured heirloom in a custom case. The silence and the dark are part of that, creating a plush space that is paradoxically full of emptiness, exerting a pressure of expectation as you sit in one of its 600 rust-colored seats. Watching a play there, you are always watching your fellow audience members as well, who sit across the thrust watching you. Because the seating is relatively compressed, you feel them, too.

In an event at Lazaridis Hall on Saturday — part of what Stratford calls New York Times week at the festival — I talked to Mr. Cimolino and to Siamak Hariri of Hariri Pontarini Architects, the Toronto firm that designed the building. We of course nerded out on details like where the rippling glass had been obtained and how the sound was tuned so that no microphones are needed.

Yet we kept returning to something more abstract: the seemingly opposing feelings of intimacy and community that theater as a human endeavor, and this theater in particular, were designed to encourage. It’s an approach that acknowledges the art form as a palimpsest: a text that has been revised and overwritten for thousands of years. (In that sense, the choice to open with “Richard III” was no accident; the play, in a production starring Alec Guinness, opened the first Stratford festival, in 1953.) If we go to the theater in part to commune with the ghosts of our human past, we also go to feel a deeper connection to people living and breathing right now, in the seats immediately to our right and left.

This week’s Trans Canada section was compiled by Vjosa Isai, a news assistant for The New York Times in Canada.

Jesse Green is the chief theater critic for The New York Times. His latest book, “Shy,” with and about the composer Mary Rodgers, will be published this fall. Follow him on Twitter at @JesseKGreen.

How are we doing?
We’re eager to hear your thoughts about this newsletter and events in Canada in general. Please send them to nytcanada@nytimes.com.