The ‘Ultimate Bird’ Once Prowled the Seas of a Young Japan 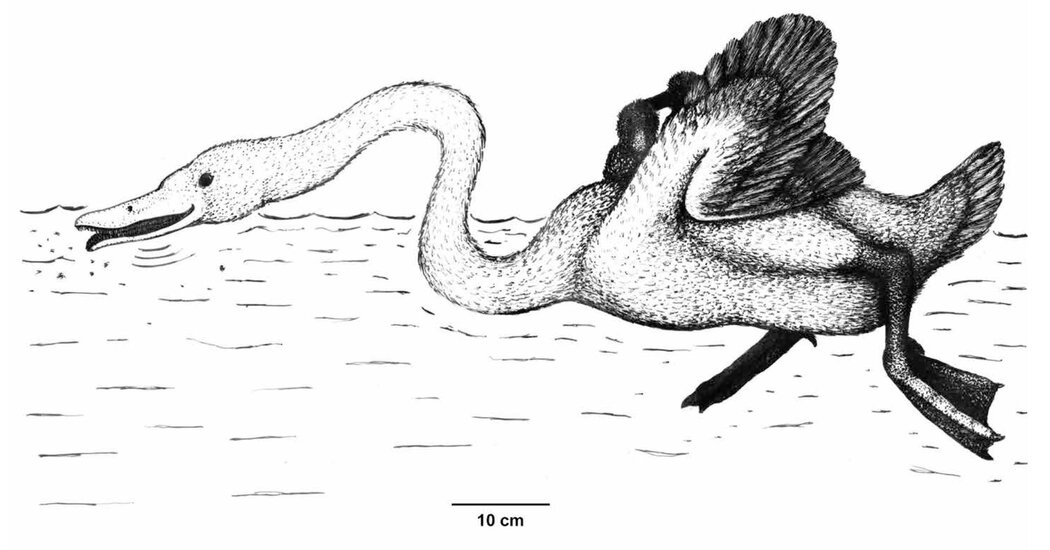 The ‘Ultimate Bird’ Once Prowled the Seas of a Young Japan

It’s not unusual today to find swans on rivers and lakes, splitting their time between pulling up water plants and punishing the unwise with powerful blows of their bony-elbowed wings.

Eleven million years ago, however, swans in what is today called Japan did something unexpected: They took to the oceans. In a paper published this week in The Bulletin of Gunma Museum of Natural History, Japanese paleontologists formally described this family or genus of swans, Annakacygna, which had long, filter-feeding heads, small wings and seriously strange hips — all of which have lead the researchers to call it the “ultimate bird.”

The first set of remains of Annakacygna — a nearly articulated skeleton in a stone slab from a riverbed in Japan’s Gunma Prefecture — were excavated by a Japanese fossil hunter in 2000. After the fossil hunter donated the remains to the Gunma Museum of Natural History, the museum director, Hasegawa Yoshikazu, called in Hiroshige Matsuoka, a paleontologist, to examine them.

Initially Dr. Matsuoka thought he was looking at a strange duck, perhaps an animal that dove in the oceans just offshore of the then-newly risen Japanese Archipelago. But as bones were cleared from the slab, he concluded that the short-winged skeleton belonged to a flightless swan.

The species, which he and his co-author Dr. Yoshikazu named Annakacygna hajimei, was about four feet long, as large as the modern black swan. Another set of remains from a related species, which they named A. yoshiiensis, suggested a bird as long as the largest living swan species, the 5½-foot trumpeter swan.

Both birds were “fatter and heavier than these modern swans,” Dr. Matsuoka said. Comparing their remains to the dissected body of a common extant swan, he found that the birds differed in other ways as well. Their tails were highly mobile. Their hips were unusually broad and strong, and their bones were thicker than usual for a water bird, helping them ride low in the water.

Oddest of all were the wings. Flightless birds usually lose some of the utility of their wings, Dr. Matsuoka said, a process called degeneration. But in Annakacygna, the shoulder joints and muscle attachments that pull the arms backward were unexpectedly well-developed, with uniquely shaped wrists that kept the digits — and with them, the wings — permanently bent.

At first, these wings puzzled the team. But while watching a video of a mute swan holding a chick on her back, Dr. Matsuoka had a brainwave. Many modern swans habitually carry their young piggyback, he said, with their wings held back and up to shield the chicks. That posture in Ananakacygna’s modern relatives suggested a new possibility: that the flightless swans might have enshrined this behavior into their anatomy, converting their bent wings and broad hips into specially adapted cradles to carry chicks safely across the briny deep.

The swans were well adapted to a coastal lifestyle in another way as well: long, filter-feeding beaks that resembled those of shoveler ducks, allowing them to dabble for plankton in the cool, rich seas off the Japanese coast. Modern swans, by contrast, have straight, vegetation-nibbling beaks.

Flightlessness isn’t unusual in water birds; modern steamer ducks, a few species of teal and several extinct varieties of geese ditched the skies for the water. Some of these waterfowl hit remarkable sizes: The Pleistocene giant swan of Malta, which some researchers have suggested was land-bound, was 30 percent larger than a living mute swan.

But while it’s smaller, Dr. Matsuoko said, Annakacygna is in a league all of its own. “I think all wild animals live for two purposes,” he said, namely maintaining the self (by eating) and the species (by breeding.) Judged by that rubric, the barge-like, baby-cradling, filter-feeding sea swan is something special.

“It’s the best survival form as an animal,” he said. “That’s why we call it the ‘ultimate bird.’”