Trudeau Strikes Accord With Opponents to Secure Hold on Power 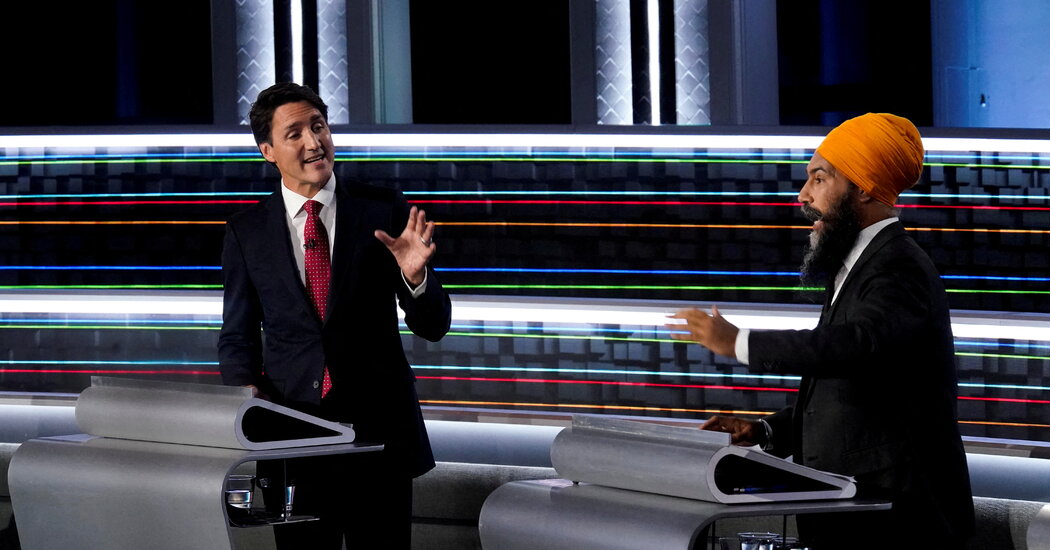 Trudeau Strikes Accord With Opponents to Secure Hold on Power

OTTAWA — Prime Minister Justin Trudeau of Canada on Tuesday announced an alliance with a left-of-center opposition party that will give him the secure hold on power that eluded him in last year’s election.

Mr. Trudeau said he has formally agreed to advance issues important to that opposition party, the New Democrats, in exchange for its continued support of his Liberal Party on key votes in the House of Commons until 2025.

“This agreement is not about compromising the core beliefs of either of our parties or denying the differences between us,” Mr. Trudeau said at a news conference. “What it is about is making sure that those differences don’t stand in the way of delivering for Canadians.”

In the election last fall, Mr. Trudeau failed to get a majority of seats in the House of Commons for the second consecutive time. As a result, he has had to rely on the ad hoc support of opposition parties to pass legislation — leaving open the prospect that his government could fall at any moment.

The agreement, Mr. Trudeau said, “is a responsible answer to the uncertainty we’re in, to the challenges facing democracies with hyper partisanship and toxic polarization.”

As a result of the agreement with the New Democrats, Mr. Trudeau said that the government would work toward adding drug and dental care to the public health system, further develop a national day care program and advance affordable housing plans promoted by the New Democrats. He also repeated previous climate change promises and affirmed support for Indigenous causes.

Mr. Trudeau’s office released the text of a formal agreement laying out commitments, to varying degrees of detail, on a bevy of issues large and small.

The announcement came weeks after Mr. Trudeau precipitated the end of the Ottawa protests that had paralyzed the city’s downtown by invoking the Emergencies Act, which was widely supported by Canadians. On Tuesday, he said the agreement would be an antidote to the domestic political instability that the pandemic and Russia’s invasion of Ukraine had wrought.

“What this means is that during this uncertain time, the government can function with predictability and stability,” he said.

At a separate news conference, Jagmeet Singh, head of the New Democrats, said that having a formal agreement was critical to his decision to back the Liberals.

“If they fall short on what we’ve agreed to, then the deal doesn’t continue,” he said, adding, “But I’m going into this with a strong conviction that we can get this done.”

The agreement is the first time Liberals have promised dental care coverage. While the New Democrats’ policy proposals differ in details from Liberal policies, they largely align with Mr. Trudeau’s political agenda.

Because the agreement does not give the New Democrats positions in cabinet, it is not a formal coalition, an arrangement Canada’s federal government hasn’t used since World War I.

But even before the agreement was formally announced, the Conservatives were characterizing it as a betrayal of voters and as the formation of a joint Liberal-New Democrat government.

“Canadians did not vote for a national dental program and they certainly did not vote for an N.D.P.-Liberal government,” Candice Bergen, the acting Conservative leader, told reporters. “I cannot imagine that all liberals are comfortable with this. There are many liberals that are fiscally responsible.”

Laura Stephenson, a professor of political science at Western University in London, Ontario, said that the agreement is “an appropriate functioning of parliamentary government,” but said she doubted it would endure.

“I’m not guessing that it’s going to last until 2025,” she added. “But if it moves ahead, does something good for Canadians and brings us all some stability, I’m all in favor.”

The New Democratic Party provincial government in British Columbia held power through a similar arrangement between 2017 and 2020. It collapsed when the government called a vote that returned the party fully to power.

In recent years, the New Democrats dropped the socialist label and changes to election funding laws cut off their supply of union money.

The new agreement’s promise on dental care, which Mr. Singh repeatedly highlighted on Tuesday, would set up a system that places income limits on eligibility, unlike the rest of the public health care system. If adopted by Parliament, the plan will exclude families with incomes of over 90,000 Canadian dollars.