U.S. Will Punish China if It Gives Military Aid to Russia, Blinken Says 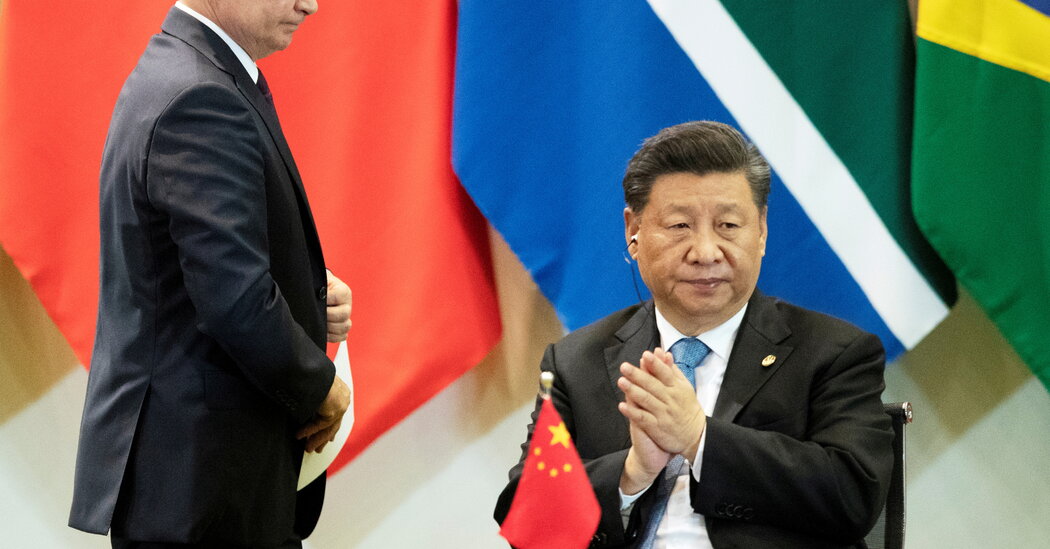 U.S. Will Punish China if It Gives Military Aid to Russia, Blinken Says

WASHINGTON — Secretary of State Antony J. Blinken said on Thursday that the United States would punish China if President Xi Jinping chose to give military aid to Russia for the war in Ukraine, where Russian forces have killed thousands of civilians.

“We’re concerned that they’re considering directly assisting Russia with military equipment to use in Ukraine,” Mr. Blinken said at a news conference in Washington. “President Biden will be speaking to President Xi tomorrow and will make clear that China will bear responsibility for any actions it takes to support Russia’s aggression, and we will not hesitate to impose costs.”

Mr. Blinken is the most senior U.S. official to explicitly warn China against giving military aid to Russia. He said that because of China’s ties to Russia, it had a special responsibility to try to persuade President Vladimir V. Putin to end his war.

But “it appears that China is moving in the opposite direction by refusing to condemn this aggression, while seeking to portray itself as a neutral arbiter,” Mr. Blinken said.

The White House announced on Thursday that Mr. Biden and Mr. Xi would talk on Friday as part of “ongoing efforts to maintain open lines of communication.” The two presidents are expected to discuss the war in Ukraine and competition between the United States and China, among other issues, the White House said.

Mr. Biden and Mr. Xi last spoke on Nov. 15 in a video call. The talk scheduled for Friday was arranged by Jake Sullivan, the White House national security adviser, and Yang Jiechi, a member of the Chinese Communist Party’s Politburo, when the two met in Rome on Monday, said Jen Psaki, the White House press secretary. During a seven-hour meeting, Mr. Sullivan warned Mr. Yang that China should not give aid to Russia.

“This is an opportunity for President Biden to assess where President Xi stands,” Ms. Psaki said at a news briefing on Thursday. She added that there had been an “absence of denunciation by China of what Russia is doing,” which “flies in the face, of course, of everything China stands for, including the basic principles of the U.N. charter, including the basic principles of respect for sovereignty of nations.”

“So the fact that China has not denounced what Russia is doing in and of itself speaks volumes,” Ms. Psaki continued. “And it also speaks volumes not only in Russia and Ukraine, but around the world.”

Mr. Xi and Mr. Putin met on Feb. 4 in Beijing, two weeks before the invasion, and issued a 5,000-word statement that said their two countries had a partnership with “no limits.”

U.S. officials told The New York Times on Sunday that Russia had asked China to give it military equipment and support after Mr. Putin began his full-scale invasion on Feb. 24. One official said Russia had also asked for economic aid to help blunt the harsh sanctions imposed on the country by the United States and its European and Asian allies.

A senior Pentagon official gave some different details this week, saying the request from Russia included drones, secure radios and even meals ready to eat, rations for troops commonly known as M.R.E.s. The official said the United States had received indications before the Rome meeting that China was inclined to oblige the Russian request.

The officials spoke to The Times on the condition of anonymity because of the sensitivity of diplomatic, military and intelligence matters.

Pentagon officials have detected that the Russian military is having problems with the performance of air-to-ground and ground-to-ground missiles in the war. The Russian ground offensive has stalled in parts of Ukraine, with columns of tanks and other armored vehicles sitting for days on roads. U.S. officials have given a conservative estimate that more than 7,000 Russian troops have been killed, more than the number of American troops killed in over 20 years of war in Iraq and Afghanistan combined.

The Russian military has turned to a tactic it used in wars in Chechnya and Syria: firing barrages of missiles, rockets and shells at cities to kill civilians, including many women and children, to try to force a surrender. Although the United Nations has estimated the civilian death toll in Ukraine at 726, it is likely to be much higher; the official toll of civilians killed in the city of Mariupol alone was at least 2,400 earlier this week.

Even with the slaughter, Chinese officials have persisted in supporting Russia. They have blamed the United States for the war and echoed Mr. Putin in criticizing NATO. Chinese diplomats and state media organizations have amplified Kremlin propaganda and a conspiracy theory about Pentagon-funded bioweapons labs in Ukraine.

On Wednesday, Xue Hanqin, the Chinese judge at the International Court of Justice, sided with the Russian judge in dissenting from a ruling that Russia must immediately end its war in Ukraine. The vote was 13 to 2.

Qin Gang, the Chinese ambassador to the United States, wrote in an opinion essay published on Tuesday by The Washington Post that “assertions that China knew about, acquiesced to or tacitly supported this war are purely disinformation.”

Evan S. Medeiros, who served as a senior Asia director on the National Security Council in the Obama White House, wrote in an opinion essay published on Thursday by The Financial Times that Europe must put pressure on Beijing to stop supporting Moscow in the war.

“Its strategic alignment with Russia before the invasion, combined with its enabling of Russia since the first missile struck, is evocative of the 1950s Sino-Soviet alliance,” he wrote, referring to a period when Mao and Stalin coordinated on politics and foreign policy.