Ukraine Claims Some Battle Successes as Russia Focuses on Another Front 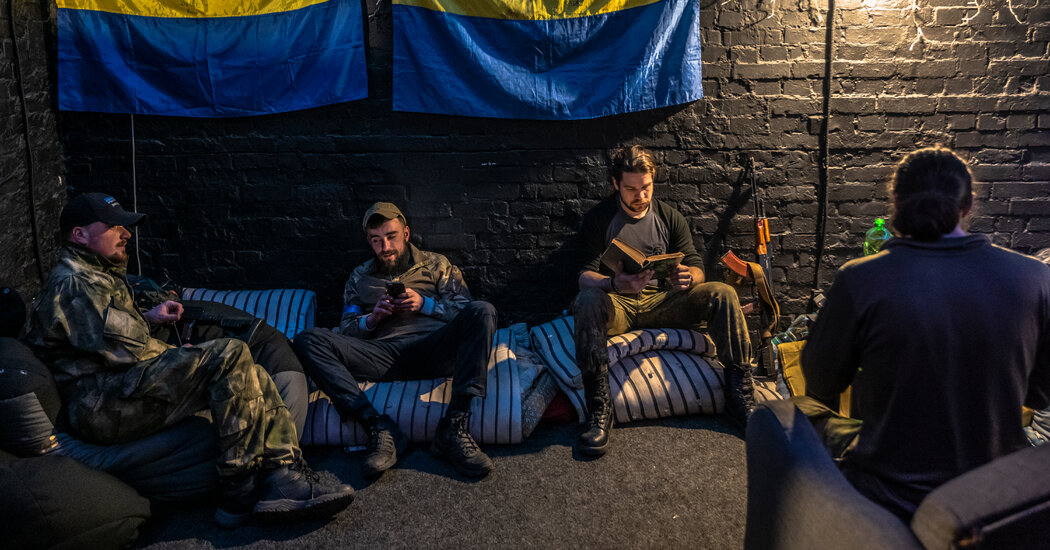 Ukraine Claims Some Battle Successes as Russia Focuses on Another Front

KYIV, Ukraine — Ukrainians on Monday reported that they had pushed back invading Russian forces in fierce fighting around Kyiv and in northeastern Ukraine, while the Russians moved to encircle and cut off Ukrainian forces in the east, making a diplomatic resolution to the war seem as far away as ever.

Ukrainian counterattacks around Kyiv reportedly retook more ground, with the mayor of Irpin, a fiercely contested suburb on the northwestern edge of the capital, saying that most Russian troops had retreated, though fighting continued in some districts. If Ukrainian soldiers can maintain control of Irpin, it would be strategically important to keeping their hold on Kyiv.

“Our Irpin is liberated from Moscow’s evil,” Mayor Oleksandr Markushin of Irpin posted on Telegram on Monday. But the deputy police chief, Oleksandr Bogai, offered a more skeptical account in a telephone interview, noting that fighting continued even as most Russian troops appeared to have pulled back, and that the Russians continued to shell the town.

Diplomacy between the warring countries continued, with Russian and Ukrainian delegations arriving in Istanbul for another round of talks set to begin on Tuesday.

While Volodymyr Zelensky, the Ukrainian president, has said that he is open to discussing the future neutrality of Ukraine, if he can get security guarantees for his country and only after a national referendum, he has refused to concede territory to Russia or to the self-declared republics in the southeastern region known as the Donbas, as President Vladimir V. Putin of Russia has demanded.

In Washington, President Biden on Monday stood by comments he made Saturday about Mr. Putin, “for God’s sake, this man cannot remain in power.” Speaking to reporters, Mr. Biden said the remark, apparently ad-libbed in a speech he delivered in Warsaw, was an expression of his personal outrage, not a statement of a U.S. policy that the Russian leader should be toppled.

On the battlefield, in addition to gains around Kyiv, the Ukrainians also reported important progress in the Sumy region, northwest of Kharkiv, near the border with Russia. Dmytro Zhyvytsky, head of regional military administration, said that the Ukrainians had recaptured the towns of Trostyanets and Boromlya. A Pentagon official confirmed the recapture of Trostyanets.

The Russian army is trying to cut off the major Ukrainian forces to the east of the River Dnipro, where the bulk of the army has been fighting Russian troops and Russian-backed separatists in the Donbas, which Moscow has recognized as the independent Donetsk and Luhansk republics. The Russian aim is to keep the Ukrainian troops from coming to the aid of Kyiv, and Russian military officials said over the weekend that their war effort was now concentrated in the east of the country.

Despite those comments, Russian forces continued to battle for control of key towns east and northwest of Kyiv.

Russian forces have seized a southern corridor between Crimea, which they captured from Ukraine in 2014, and the Donbas, interrupted only by the besieged port city of Mariupol, which they have devastated with artillery, rockets and airstrikes, and appear determined to capture.

“Russian forces appear to be concentrating their effort to attempt the encirclement of Ukrainian forces directly facing the separatist regions in the east of the country, advancing from the direction of Kharkiv in the north and Mariupol in the south,” the British Ministry of Defense said in a statement.

A spokesman for Mariupol’s mayor, Vadym Boichenko, said on Monday that almost 5,000 people, including about 210 children, have been killed there. Those figures could not be confirmed. The mayor’s office also said that 90 percent of the buildings had been damaged and 40 percent destroyed, and that some 170,000 people still remain in the city — again, figures that cannot be confirmed.

“The situation in the city remains difficult,” Mr. Boichenko, who is no longer in the city, said on national television on Monday. “People are beyond the line of humanitarian catastrophe. We need to completely evacuate Mariupol.”

In weeks of talks between Ukrainian and Russian representatives, there have been no clear diplomatic steps toward bringing the war to an end. Mr. Putin’s spokesman, Dmitry Peskov, said on Monday that while the decision to keep talking in person was important, “We cannot yet talk about progress and we will not.”

In an interview on Sunday with independent Russian media — an interview censored in Russia itself — Mr. Zelensky restated his willingness to accede to at least some Russian demands.

“Security guarantees and neutrality, non-nuclear status of our state — we are ready to go for it,” he said.

But it is not clear what neutrality would mean. Mr. Putin insists that Ukraine must never join NATO, a demand Mr. Zelensky appears to have accepted, but also that it demilitarize, a term that has not been defined. And it remains unclear if Mr. Putin would accept Ukraine joining the European Union, too.

After all, Mr. Putin has responded with force in the past to Ukraine’s drawing closer to Europe. He pressured the last Kremlin-aligned Ukrainian president, Viktor Yanukovych, to renege on a promised trade deal with the European Union. After that sparked protests that forced out Mr. Yanukovych in 2014, Mr. Putin invaded Crimea and spurred the separatist war in Donbas.

On Sunday, Mr. Zelensky again called for direct negotiations with Mr. Putin, but the Russian foreign minister, Sergey V. Lavrov, repeated on Monday that such talks would have to wait for more progress in the peace talks — and presumably more progress in Russia’s war.

Reports emerged Monday that Ukrainian peace negotiators and a Russian billionaire attempting to act as a mediator might have been poisoned early this month, though the circumstances were very murky and those affected all recovered.

The first reports, by The Wall Street Journal and the investigative group Bellingcat, indicated that at least two Ukrainian peace negotiators and the Russian oligarch Roman Abramovich, who has attempted to act as a go-between, developed unusual symptoms at the same time in early March after meeting in Kyiv — red eyes, constant and painful tearing, and peeling skin on their faces and hands.

Biden’s comments. During a speech in Warsaw on Saturday, President Biden said that President Vladimir V. Putin “cannot remain in power,” sending U.S. officials scrambling to walk back the ad-lib. On Monday, Mr. Biden stood by his remark, but said it was a personal expression of his outrage.

The description of the symptoms was confirmed to The Times by someone close to Mr. Abramovich.

Asked about the reports, members of the Ukrainian negotiating team did not address them directly. “There is a lot of speculation, various conspiracy theories,” said one, Mykhailo Podolyak. Another, Rustem Umerov, referred to “unverified information.”

Reuters reported that an unnamed U.S. official “with knowledge” of the matter said that the sickness may have been caused by “an environmental factor.”

Within Russia, censorship of the Zelensky interview was just another indication of the repression of information — the government has essentially made it a criminal offense to criticize the war — or even call it a war. On Monday, Novaya Gazeta, the Russian newspaper that helped define fearless journalism in the post-Soviet era and whose editor, Dmitri A. Muratov, shared the Nobel Peace Prize last year, suspended publication in print and online at least until the end of war, leaving Russia without a major media outlet critical of the Kremlin.

President Biden has not withheld his own contempt for Mr. Putin and this war. Mr. Peskov on Monday said that Mr. Biden’s comments in Warsaw about Mr. Putin not remaining in power “are concerning, of course.” He added that “we will continue following the U.S. president’s statements very carefully, we are scrupulously documenting them and we will keep doing this.”

Emmanuel Macron, the president of France, who is seeking re-election next month, warned on Sunday against escalation of words or actions, in an implicit critique of Mr. Biden. Mr. Macron, who has had several conversations with Mr. Putin, said he hoped to achieve “first a cease-fire and then the total withdrawal of troops by diplomatic means.” He added, “If we want to do that, we can’t escalate either in words or actions.”

Mr. Zelensky has consistently demanded more action from NATO and Western countries — to establish a no-fly zone over Ukraine, to supply combat aircraft, to accelerate the flow of advanced weaponry, including armed drones, ground-to-air missiles and anti-tank weaponry, not to mention many thousands of rounds of ammunition. Washington and its allies have ruled out a no-fly zone; they have not refused to provide aircraft, but so far they have not delivered any.

In an interview with the Economist in Kyiv, Mr. Zelensky said he was committed to victory and asked for more aid.

“We believe in victory,” he said. “It’s impossible to believe in anything else.” But to achieve it, he said, Ukraine needs tanks, armored personnel vehicles and military aircraft, and it needs them now.

The West can just promise to help in coming weeks, he said. “It doesn’t allow us to unblock Russia-occupied cities, to bring food to residents there, to take the military initiative into our own hands.” And Russia keeps pushing ahead, he said. “The Russians have thousands of military vehicles, and they are coming and coming and coming.”