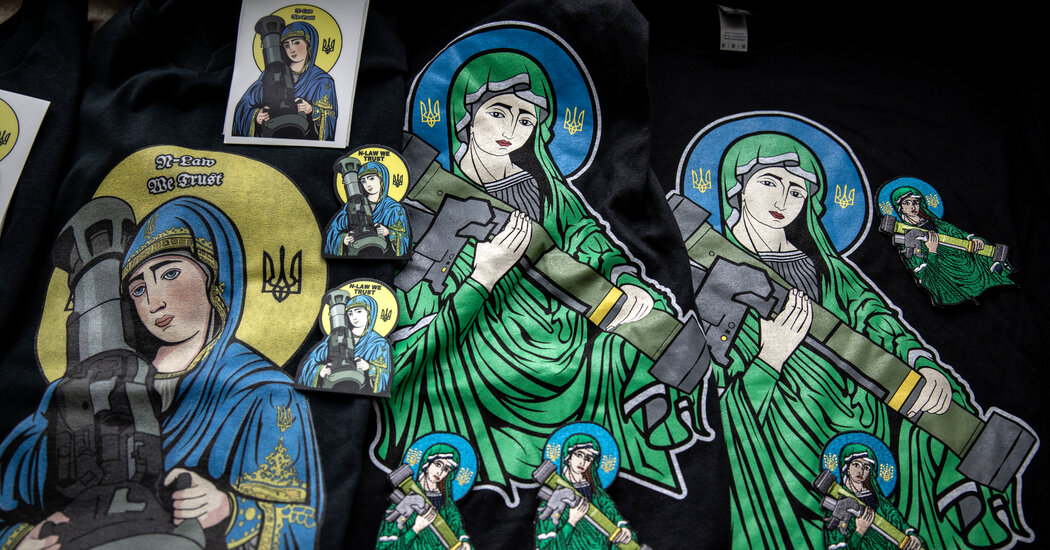 LVIV, Ukraine — Christian Borys was at home in Toronto in February trying to find a way to help Ukrainians threatened by war when he decided to print some stickers from an internet meme: the Virgin Mary hoisting an antitank missile.

Mr. Borys, who had worked for the e-commerce platform Shopify before turning to journalism, said he created a website in half an hour, hoping to raise money to send to a charity for Ukrainian orphans. That night, he made 88 Canadian dollars in sales. By the time he added T-shirts at the end of February, the threat of war had turned into a full-scale invasion, and he said sales grew to 170,000 Canadian dollars a day — most coming from the United States.

“The internet speaks in memes and it just became this crazy, viral sensation,” he said. “I think it’s because people were looking for a symbol of support, a way to support Ukraine, because they saw the whole injustice of everything.”

Images such as Ukrainian tractors towing away a disabled Russian tank and helicopter, although unverified, have not only helped fight Russian disinformation, but also helped support Ukrainian charities and even the Ukrainian military.

The merchandise sales they have generated in the United States and elsewhere are surprising given that many people buying the T-shirts, stickers, coffee mugs and chocolate bars would never have thought about the Eastern European country before the conflict.

Mr. Borys’s site, Saint Javelin, has raised so far almost $1.5 million to assist the Ukrainian charity Help Us Help, which has branched into multiple services, and to provide protective equipment for journalists covering the war, he said.

“I think it’s unprecedented,” said Peter Dickinson, editor of the UkraineAlert service at the Atlantic Council, speaking about the internet-generated support. “We’ve got to bear in mind that this is a technological thing as well, that we’re at the point where the tools are in place.”

When Russia invaded and annexed the Crimean Peninsula in 2014, the invasion received far less attention in the West. This time, President Biden’s warning in mid-February that Russia was days away from invading Ukraine brought thousands of journalists rushing in, and the news dominated the headlines.

“Russia had been very successful in the past about putting out all sorts of information about Ukraine because nobody really knew much about Ukraine,” Mr. Dickinson said. “It was like a blank slate.”

That quickly changed starting in February when Ukraine was seen as the clear underdog against a much more powerful invader. Crowdfunding efforts sprung up — raising millions of dollars for the Ukrainian military, including through cryptocurrency — when European allies at first would not send more arms to the country to avoid inflaming the fighting.

Now the overwhelming public image of Ukraine, boosted by memes and merchandise, is of a plucky country that, against all odds, is turning the tide of war.

“This is about the spirit of our fight and our struggle,” said Taras Maselko, marketing director for the clothing company Aviatsiya Halychyny, which sells T-shirts under a category called “Fight Like Ukrainians.” Mr. Maselko said 20 percent of the orders came from outside Ukraine.

“You know if you are wearing a T-shirt, if you are reading something on social media, it brings you to the reality of what is going on in Ukraine,” he said.

The clothing brand’s biggest seller is a T-shirt with the now-famous, profane response that Ukrainian border guards on Snake Island, an outpost in the Black Sea, gave to a Russian warship that had ordered him and his unit to surrender.

The response is a rallying call, with all its profanity, put up on billboards in Ukraine and chanted by children and their parents at protests outside the country.

This week, Ukraine’s postal service unveiled a stamp depicting a Ukrainian navy special forces operator with his middle finger raised at the warship. It plans to launch a website to sell the stamps, coffee cups and other merchandise.

The Russian warship, called the Moskva, sank on Thursday after Ukraine fired Neptune missiles at it, according to U.S. officials. The Russian government denied that it was attacked and said that it was disabled when a fire broke out.

The post office is printing one million stamps and selling them at face value, the equivalent of less than $1 each, its director, Igor Smelyansky, said in an interview.

He said some people reselling the stamps for much more had pledged to donate the proceeds to the Ukrainian army. But Mr. Smelyansky, who is Ukrainian American, said the opportunity to demoralize Russia was priceless.

“As the postal service we are always happy when the addressee gets the message,” he said.

Humor amid adversity runs deep in Ukrainian culture. Before being elected president three years ago, President Volodymyr Zelensky was a comedian. A famous Russian painting depicts the Zaporozhian Cossacks, in what is now Ukraine, laughing uproariously as they draft a profanity-laced letter to the 17th-century sultan of the Ottoman Empire who demanded that they submit to him.

In the current wartime, shops in the western Ukrainian city of Lviv sell chocolate bars with images of Mr. Zelensky. Another has the president’s adviser, Oleksiy Arestovych, depicted as a television sitcom character saying, “Everything will be fine.”

Aviatsiya Halychyny, the clothing company, continues to produce the T-shirts in Lviv. Profits from the T-shirt line are being sent to the Ukrainian Air Force, with about $70,000 raised so far, according to Mr. Maselko.

Three weeks ago, Mr. Borys, a Canadian of Ukrainian Polish origin, turned Saint Javelin from an all-volunteer effort to a full-time staff of four to keep up with demand.

His website has branched out from the Virgin Mary to other saints: Saint Carl Gustaf wears a gas mask, while “Saint Olha, the Warrior Queen of Kyiv” wears a crown and hoists a bazooka over her camouflaged shoulders.

“People on Instagram demand we make things basically,” Mr. Borys said. “We get messages from people in Spain who say, ‘Hey, we just shipped the C-90,’ a shoulder-fired rocket propelled grenade launcher,” he said. “And they’ll say, ‘Hey we want a saint for Spain’ or a saint specific to that type of system.”

The Virgin Mary, dressed in blue and gold robes and holding a Javelin, is an image adapted from a painting by the American artist Chris Shaw. Mr. Shaw based that painting on an earlier work in 2012 with the Madonna holding a Kalashnikov rifle.

Mr. Borys acknowledges that some people may find the image blasphemous.

“People definitely get offended but the vast, vast majority of people see what it actually stands for,” he said. “Religious symbolism has been used in war for hundreds of years. To say it’s blasphemous is not understanding the reality of war and how people look for symbols of support.”