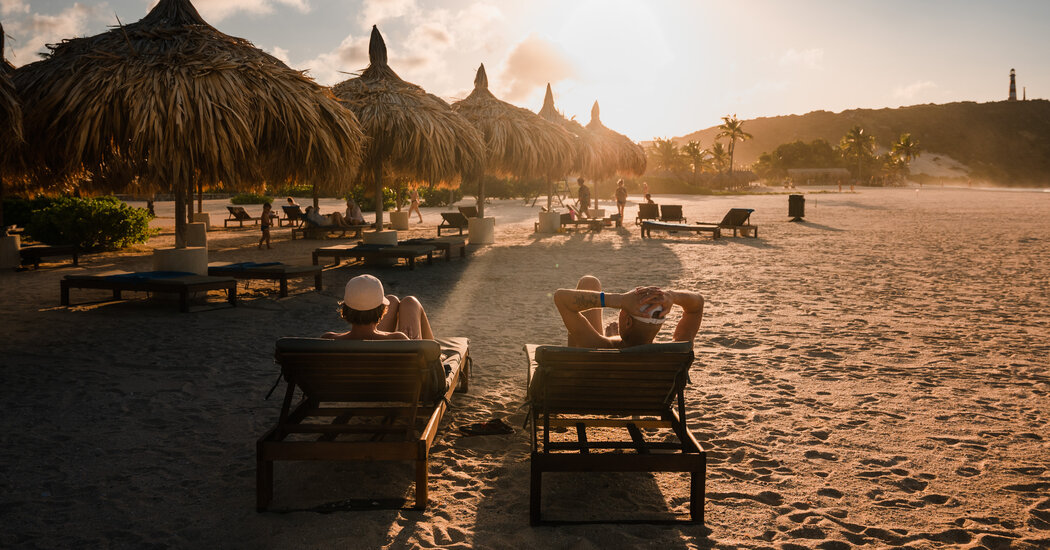 PLAYA PUERTO CRUZ, Venezuela — They drank rum and danced to a boombox blasting Russian electro pop music in a scrappy airport waiting hall. Singing “It’s Not Enough,” they enjoyed the last hours of their tropical holiday.

The travelers could have been mistaken for those on spring break. In fact, they were Russians waiting to board the last flights back to Moscow before sanctions cut off their route home — their future and that of their hosts upturned by President Vladimir V. Putin’s invasion of Ukraine.

Russian tourists had helped breathe an unlikely new life into Venezuela’s idyllic island of Margarita, once a Caribbean tourist mecca that was devastated in recent years by economic crisis, international isolation and the pandemic. Under a deal approved by the two countries’ allied governments, more than 10,000 Russians have visited Margarita since September on direct charter flights from Moscow, in what was the island’s only international connection.

The deal gave jobs to hundreds of Margarita residents in 20 hotels, and compelled the central government to improve the island’s shambolic supply of electricity, water and gasoline. Endemic crime was brought to heel; businesses began to reopen; residents who had emigrated began to return.

The recent surge of Russian visitors represented a tiny fraction of the three million tourists Margarita received annually at its peak in early 2010s. But the arrival of the first organized international tours in years gave the locals hope that they had turned the tide on misfortune.

“We want to hug any foreigner who comes here,” said José Gregorio Rodríguez, the head of the Chamber of Commerce in Venezuela’s archipelago state of Nueva Esparta, which includes Margarita. “When you’re at zero, any improvement is welcomed.”

The Russians were drawn to Margarita by cheap prices, exoticism, a lack of visa or pandemic restrictions and yearlong sun, said tourists interviewed on the island in February and early March. Tours started at $850 per person for 13 nights in an all-inclusive, three-star beach hotel, including return flights from Moscow, 15 hours each way.

“It’s something new, something exciting,” said Lucia Aleeva, a blogger from the city of Kazan. “We’re the first explorers, in a way.”

Some Russian tourists said they booked the tickets to Margarita just a day or two before the trip without knowing anything about Venezuela, attracted to the destination by its unusually low price. Most of those interviewed described themselves as small business owners or provincial public workers, with many coming from state capitals as far away as Chita, a Siberian town near Mongolia. Some had never been outside Russia; most had never been to Latin America.

Many of the older tourists began their holiday in a stereotypical Russian way: with heavy drinking.

Last month, Algis, who works for a construction company in Sochi, in southern Russia, was inebriated when he got off the plane wearing several layers of winter clothes in 90-degree heat. He held a bag of duty-free alcohol in one hand, and a crumbled pack of assorted dollar bills in another, saying he intended to invest them in a prospective marriage on the island.

Another tourist named Andrey, who leases heavy equipment in the mining city of Chelyabinsk, recounted over a dinner laden with copious bottles of cheap Chilean wine how, during a heavy drinking session that began in his hometown and carried onto the Moscow airport terminal and the flight to Margarita, he was startled by a voice announcing over the plane’s loudspeaker that he had been selected to meet Venezuela’s tourism minister on landing because he was the 10,000th Russian tourist to visit the island.

Andrey said he struggled to stand straight for the photograph.

In the sprawling Margarita resort of Sunsol Ecoland, Russians danced until the early hours at a beach disco alternating reggaeton with Russian hits from bands such as Leningrad, a foul-mouthed ska act that romanticized the hard-living and hard-drinking exploits of working-class underdogs.

In visits to Margarita’s colonial towns during the day, many marveled at Venezuelans’ ability to maintain good spirits despite the everyday economic hardships.

But then on Feb. 24, Russia invaded Ukraine and the war quickly reverberated in regions far removed from the battlefield.

As fighting escalated, Western nations and companies closed their airspace to Russian flights and halted leasing contracts and aviation parts supplies. In response, the Russia-focused tour operator Pegas Touristik told clients soaking up the sun on Margarita that they would have to evacuate.

Many started wondering what travails would now await them at home.

Inflation in Russia is spiking; fears of shortages and hoarding are growing; and the government is enforcing currency controls and threatening foreign companies, echoing life during Venezuela’s eight-year economic depression, from which the South American country is just emerging.

“Thankfully, they have the sea and the sun,” said Yulia, a ministry worker from Moscow. “In a country like ours, surviving turmoil and poverty would be much harder and sadder.”

Like other Russians interviewed on Margarita since the start of the war, Yulia asked not to use her last name. None of the Russian tourists The Times spoke with would comment on the invasion itself, or on the early reports of civilian casualties in Ukraine. They often blamed a poor internet connection for not keeping up with the news. The Russian government has made even mentioning the war a criminal offense punished with up to 15 years of prison.

Yulia spent her last days in Margarita on the beach reading the dystopian novel “1984,” by George Orwell.

As the fighting and the international sanctions against Russia intensified, the mood at the resorts grew progressively somber. The Russians’ purchasing power plummeted with the ruble, and their bank cards stopped working.

Biden’s diplomatic push. President Biden will travel to Europe for talks with NATO allies this week, in his most direct effort yet to rally opposition to the invasion. In a call with Western leaders ahead of his trip, he assailed Russia’s attacks on civilians and discussed providing assistance to refugees.

Sunsol’s Russian guests ate their last dinner on the island in silence. The usual noise of a lively conversation and the shuffling and clinking of the wine glasses in the hotel’s large buffet hall was gone, replaced by the distant sound of the rolling waves.

The beach disco was empty. A group of Venezuelan performers danced on the stage on their own, fruitlessly trying to cheer the somber guests contemplating their impending problems.

Russian currency has lost around 37 percent of its value since the start of the war, and hundreds of thousands of its citizens are facing unemployment, as sanctions shutter companies at a record pace.

A Russian association of tour operators said international bookings fell 70 percent in the week after the outbreak of the war.

The mood among the resort staff was equally grim.

The war has dealt a major blow to Margarita, which expected to receive 65,000 Russian visitors this year. Some business people remodeled their idle hotels to accommodate the expected visitors and hired new staff, hoping that Russian flights would open doors to other international tourists.

The salaries were paltry — waiters earned as little as $1 a day — but the jobs at least provided steady meals in a country where hunger remains rife. Since the war broke out, many people have already lost jobs or had their shifts cut.

The last flight out of Margarita for Moscow left on March 8. All major Russian airlines have since stoped flying west beyond neighboring Belarus.

Although Pegas continues advertising Margarita tours starting in April, those who own tourism businesses on the island say the route’s future is uncertain.

During the last days of their vacation, some guests said they put their faith in Mr. Putin, who governed Russia for 22 years with the support of many Russians.

“We trust our president,” said a tourist from Moscow, also named Yulia. “I don’t think we will lead us to collapse.” Her husband Oleg quietly interjected, “Well, it’s already collapsed.”

Others tried enjoying the remainder of what they saw as their last view of the outside world.

“We decided to unwind, like it’s the last time,” said Ravil, a designer from Moscow. “We don’t understand if we will return to the same country from which we left.”