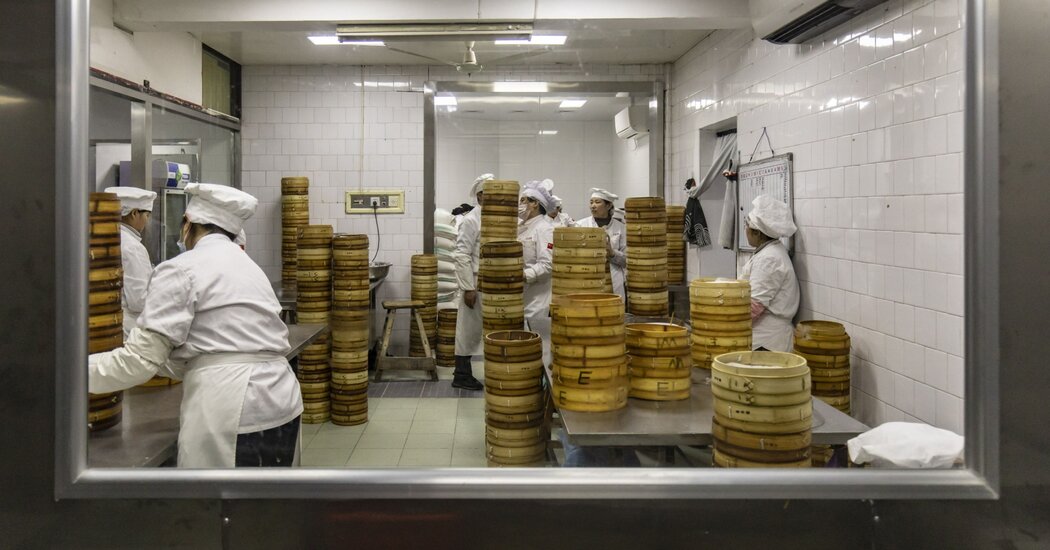 PINGGU, China — From village to village, the wheat crops in China have been inconsistent this season.

One field on the flat plains east of Beijing was patchy, with knee-high emerald stalks in some spots while almost bald elsewhere, damaged by the torrential rains of last autumn. The next village over, a luxurious wheat crop was thriving after this spring’s bright sunshine and slow, soaking rains.

China’s winter wheat harvest next month is one of the big uncertainties in a global economy already struggling with high commodity prices, particularly in regions heavily dependent on crops from Russia and Ukraine. If the Chinese harvest is bad in the coming weeks, it could drive food prices up further, compounding hunger and poverty in the world’s poorest countries.

It has been a perfect storm of war and weather.

Russia’s invasion, including a blockade of ports, has disrupted supplies from Ukraine, a leading grain exporter long known as Europe’s breadbasket. The United Nations World Food Program called last week for the immediate reopening of Ukrainian ports, “before the current global hunger crisis spins out of control.”

Energy prices have been rising since before the war, prompting many fertilizer producers to slow or close their factories. As fertilizer costs soar, many farmers around the world are using less, contributing to smaller harvests.

Poor weather has added to the challenges. It has been scorchingly hot this spring in India, a large wheat exporter, while drought has hurt the crops in the southern Great Plains of the United States and in East Africa.

It has been a double blow for East African nations, including Somalia, Kenya and Ethiopia, which are heavily dependent on Russia and Ukraine for the bulk of their wheat imports. Bread prices have doubled in some areas. The World Food Program warned last Friday, “44 million people around the world are marching toward starvation.”

China, the world’s largest producer and consumer of wheat, is the next pressure point for prices.

Deluges last autumn left the soil so waterlogged that the wheat could not easily take root, said Ren Ruixia, a 45-year-old farmhand, as she surveyed a wheat field that looked like it had a bad haircut. Coronavirus lockdowns also delayed the arrival of fertilizer, she said.

“Right now, it seems that the harvest is definitely affected,” Ms. Ren said in late April. “But it also depends on the weather next month — how much rain we have.”

The adequacy of food supplies has long been a top issue in China, where tens of millions of people died of famine in the early 1960s during Mao’s disastrous agricultural experiments. Stringently enforced rules require that a large share of the country’s acreage — 463,000 square miles, larger than Texas — be farmed. Rural villages are sometimes bulldozed to maintain the national target for acres under cultivation.

Xi Jinping, China’s top leader, has made food security a paramount focus, notably when commodities became a trade issue with the United States during the Trump administration.

“In the future, the demand for food will continue to increase, and the balance between supply and demand will become tighter and tighter,” he warned in a policy speech published March 31 in Qiushi, the Chinese Communist Party’s leading theoretical journal. “In addition, the international situation is complicated and severe, and we must always be on high alert to ensure food security.”

China’s agriculture minister, Tang Renjian, stirred international concern in early March when he said the wheat crop would be the worst on record because of the deluge last fall. Other agriculture ministry officials have issued warnings, although not quite as downbeat.

Western experts analyzing satellite photos of the Chinese crop have generally been less worried than Chinese officials. The U.S. Department of Agriculture estimated last month that China’s wheat crop would be 3 percent smaller than last year’s.

“I don’t think it’s going to be a disaster, but I don’t think it is a normal crop, either,” said Darin Friedrichs, a founder and market research director at Sitonia Consulting, a Shanghai commodities analysis firm.

Top Chinese officials have issued pessimistic warnings in the past, notably in 2011, to make sure lower-level officials pay close attention to the harvest. A global food shortage may be making Chinese officials especially cautious this year.

China has a sizable stockpile of wheat for emergencies. But some of the wheat may be fit only for animal consumption given the poor storage, said Joseph W. Glauber, a senior research fellow at the International Food Policy Research Institute in Washington.

A new security deal. The Solomon Islands signed a sweeping security agreement with China that could threaten the stability of the entire Asia-Pacific region. The deal gives Beijing a foothold in an island chain that played a decisive role in World War II and could be used to block vital shipping lanes.

A pause on wealth redistribution. For much of last year, China’s top leader, Xi Jinping, waged a fierce campaign to narrow social inequalities and usher in a new era of “common prosperity.” Now, as the economic outlook is increasingly clouded, the Communist Party is putting its campaign on the back burner.

“The international situation is complicated and severe, and we must always be on high alert to ensure food security — we’d rather produce more and increase reserves,” Mr. Xi said in the remarks issued at the end of March.

The coronavirus is complicating matters. Lockdowns this spring have disrupted farming in big agricultural areas like Jilin Province. And many families, barred from leaving their apartments to go grocery shopping, have struggled to find enough food.

Some people have been stockpiling, worried they might face the same lockdown restrictions. Cai Wenling, a 43-year-old resident of Chongqing, said she had bought four gallons of rapeseed oil, nearly 100 bottles of mineral water, four weeks’ worth of milk and so much pork, beef and chicken that her refrigerator and freezer were full. She still plans to buy another 110 pounds of rice.

“Although I stocked up, I still feel confident in Chongqing’s epidemic prevention.” Ms. Cai said, “For middle-aged people like us, we would be more conservative when we consider things. We have the confidence, but preparedness averts peril.”

China’s nervousness about its food stocks could ripple through the global supply chain.

China has the world’s largest foreign currency reserves, so it has the ability to buy as much wheat as it needs in world markets. But doing so could push the price of wheat even higher, making it unaffordable in many poor countries.

China’s next move will come down to the harvest.

In villages around Pinggu, wheat farmers gave varying assessments. Much depends on how well drained their fields are, but everyone agreed that the rain last autumn had been remarkable.

The rain came down in torrents week after week in the wheat belt of China, drowning hundreds of people in tunnels and along riverbanks. In Pingyao, the centuries-old city walls, made with mud cores, collapsed after they became sodden last fall.

Zhang Dewang, a 69-year-old resident of the village of Daxingzhuang, west of Pinggu, said the wheat in his family’s field was growing quite well. The crop was planted unusually late, after the autumnal equinox, the traditional last day of planting in the area.

But in recent years the weather has been staying warm later, Mr. Zhang said, so the wheat has a chance to germinate before winter frosts force it into dormancy.

“The wheat is growing so well,” he said. “It’s coming along great.”