Where China Is Changing Its Diplomatic Ways (at Least a Little) 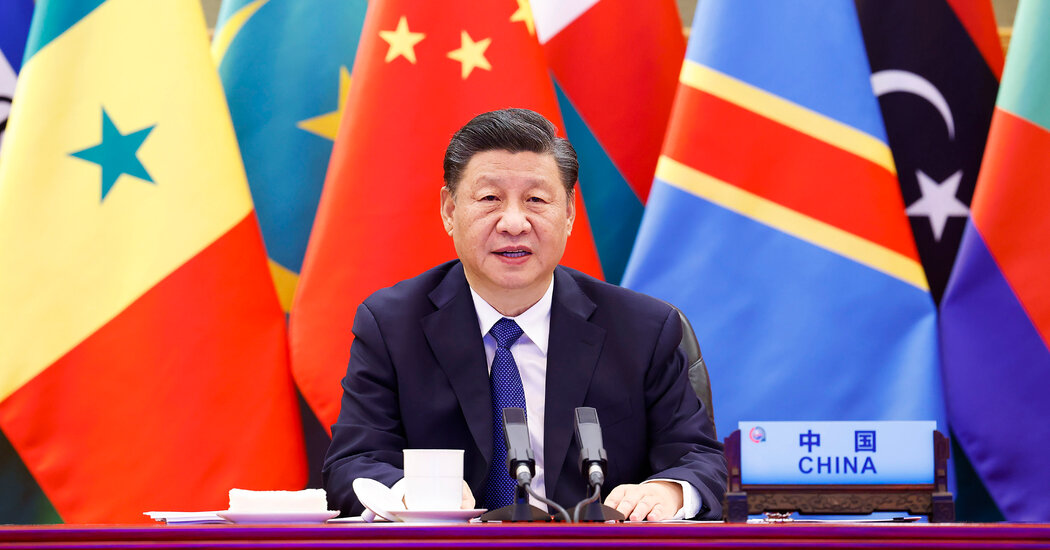 Where China Is Changing Its Diplomatic Ways (at Least a Little)

Whirlwind visits to crisis-riven nations in Africa. A sleek training center for the continent’s up-and-coming politicians. The prospect of major debt forgiveness for a favorite African country.

As relations with the United States and Europe plummet, China is starting a new wave of diplomacy in Africa, where it dominates trade with resource-rich nations and keeps friendly ties with mostly authoritarian leaders, unfettered by competition from the West.

China’s campaign to cultivate African allegiances is part of a great geopolitical competition, which has intensified since the start of the war in Ukraine. Already fiercely vying for loyalties in Asia, Beijing and Washington are now jockeying broadly for influence, with the United States, Europe and their democratic allies positioned against China, Russia, Iran and other autocracies. Heightening the competition, Russia’s foreign minister, Sergey V. Lavrov, began a tour of Egypt, Ethiopia, Uganda and the Democratic Republic of Congo Sunday.

In Africa, China is adjusting its approach, more closely integrating financial and diplomatic efforts. It’s a recognition that just building new expressways, hydropower dams and skyscrapers — as China has tried to do with the Belt and Road Initiative — isn’t sufficient to secure relations.

While the initiative across dozens of countries has helped to relegate the United States to a second-tier position in many places, the projects have also amplified tensions and added to a mounting debt crisis. To complement the rails and roads, China’s leader, Xi Jinping, started a new Global Security Initiative in the spring, a broad effort to bring developing countries together.

A big lender to Africa, Beijing is seeking to protect current and future assets, including demand for the continent’s vast minerals. It also wants to make sure its first overseas naval base, in Djibouti at the entrance of the Red Sea, operates smoothly to ensure shipments of oil.

China is reaching from Ethiopia, on the strategically important Horn of Africa, to Zambia, a heavily indebted nation with big copper mines, farther south. Beijing is offering to mediate in civil conflicts that are causing devastating famine, and most significantly, it is signaling a new strategy to resolve billions of dollars in overdue Chinese loans.

“The United States has been saying it’s pivoting to Asia, so there’s the perception of an American retreat on the continent,” said Murithi Mutiga, project director for the Horn of Africa at International Crisis Group, a research group.

“The Chinese have been the main economic partner,” he added. “Now they are making a play on the geopolitical sphere as well.”

Push back against surveillance state. As China builds up its surveillance apparatus, it is facing growing unease about the lack of safeguards to prevent the theft or misuse of personal data. Beijing’s move to censor news about one of the largest known breaches of a Chinese government computer system showed keen awareness of how security lapses can harm its credibility.

Beijing’s strategy is financially grounded. Trade between China and the continent topped $250 billion in 2021, compared with $64.33 billion for the United States. Chinese companies operating in Africa are investing so quickly in lithium mining that by 2030, China is expected to control 75 percent of the mineral, which is largely used in electric vehicles, said Henry Sanderson, executive editor of Benchmark Mineral Intelligence.

Building off the economic projects, China is changing its diplomatic messaging. Rather than keeping a distance from thornier issues, it is engaging directly, even if it’s not always welcomed.

In January, the Chinese foreign minister, Wang Yi, visited three African countries. His message: China wants to help solve their conflicts, many of them internal conflicts.

In Ethiopia, the fighting between the central government and the Tigray People’s Liberation Front has forced two million people from their homes and left parts of the country in famine.

China appointed Xue Bing as envoy to the Horn of Africa, a new post, in February. Mr. Xue, a former Chinese ambassador to Papua New Guinea, has flown to several countries, including Kenya, Ethiopia, Eritrea, Sudan and South Sudan.

In June, Mr. Xue convened the foreign ministers and deputy foreign ministers from five nations in the Ethiopian capital, Addis Ababa, boasting that China was taking an evenhanded approach to long-term civil conflicts.

The Chinese official was the latest in a line of outside mediators trying to end the conflict or halt the humanitarian catastrophe in Ethiopia, often with little success.

At the first session in Addis Ababa, Mr. Xue said he would be happy to gather the countries again. “I myself am ready to provide mediation efforts,” he said. But no new date was set, and Ethiopia, which appeared to be Mr. Xue’s major target, did not take up his offer.

China has also promoted its authoritarian model, in contrast to the United States’ defense of democracies.

China is an old hand at teaching the virtues of the one-party state to African leaders, a constant theme when Mao Zedong was alive. Now, China is presenting an updated version at a new training school in Tanzania, started by the International Liaison Department, the powerful body within the Communist Party that promotes China’s ideology and influence abroad.

Named after Julius Nyerere, the founding president of Tanzania and a stalwart supporter of Mao, the school accepted its first batch of future leaders in June, drawn from political parties in six southern African nations that have ruled without serious challenges since independence.

At the opening, the head of the liaison department, Song Tao, addressed the young politicians by video, urging them to follow the governance model embodied by the Chinese Communist Party.

Looming in the background of China’s diplomatic endeavors is debt. Some African nations that signed up to the Belt and Road Initiative are unable to keep up their payments, a crisis compounded by high inflation and depreciating currencies.

China is Zambia’s biggest bilateral lender. Beijing has built roads, two airports and a major dam in Zambia, and the country urgently needs to restructure $6 billion of debt. The International Monetary Fund has told Zambia that unless the China debt issue is resolved, it will not provide a $1.3 billion bailout package.

China is working with Zambia’s new president, Hakainde Hichilema, who won after playing up corruption accusations against former President Edgar Lungu, long favored by China. In one of Mr. Hichilema’s first moves, he canceled some Chinese projects.

In December, the Biden administration invited the Zambian president to address its virtual Summit for Democracy, setting up a modicum of competition with Beijing.

Then in May, Mr. Xi spoke by phone with Mr. Hichilema.

“The call reassured Zambia’s new president that the Chinese would come through with a debt relief offer,” said Deborah Brautigam, director of the SAIS China Africa Research Initiative at Johns Hopkins School of Advanced International Studies.

In the past, China has worked on its own — and secretively — with countries on debt relief. That’s in part, Ms. Brautigam said, because many Chinese government entities, as well as companies, hold the debt, complicating efforts to hash out agreements. In Zambia’s case, nearly 20 different Chinese entities are involved, she said.

Western critiques of China’s lending are regularly rebuffed by Chinese officials as unfair and lacking in understanding.

In Zambia’s case, this was particularly true, said Zhao Yongsheng, a finance expert at the University of International Business and Economics, a Chinese research institute. Mr. Zhao worked on an aid project nearly 40 years ago in Zaire, now the Democratic Republic of Congo.

Beijing had deferred Zambia’s debt payments on about $1 billion in loans over the last two years, giving special consideration for the pandemic, Mr. Zhao said.

“The Chinese are actually more able to understand the difficulties and problems faced by African countries such as Zambia, before and now, than European countries and the United States,” he said.

Last month, under pressure from multilateral financial institutions, China participated for the first time in a meeting with the Paris Club of creditor nations to start resolving Zambia’s debt issue. The solution is expected to either extend the period of payment for Zambia or reduce the value of the loan for China.

In a move aimed at mediating the squabbles among the myriad Chinese lenders, China’s Ministry of Foreign Affairs is now involved in the process. A new Chinese ambassador in Zambia, Du Xiaohui, is promoting a swift resolution, Ms. Brautigam said.

If the Zambia debt crisis is handled more openly, China could burnish its image and African countries with huge loans could benefit, said Guyude Moore, a former minister of public works in Liberia and now an analyst at the Center for Global Development in Washington. It could “usher in a period of normalization of debt.”

In the face of looming debt crises across Africa, he added, “this is a big deal.”