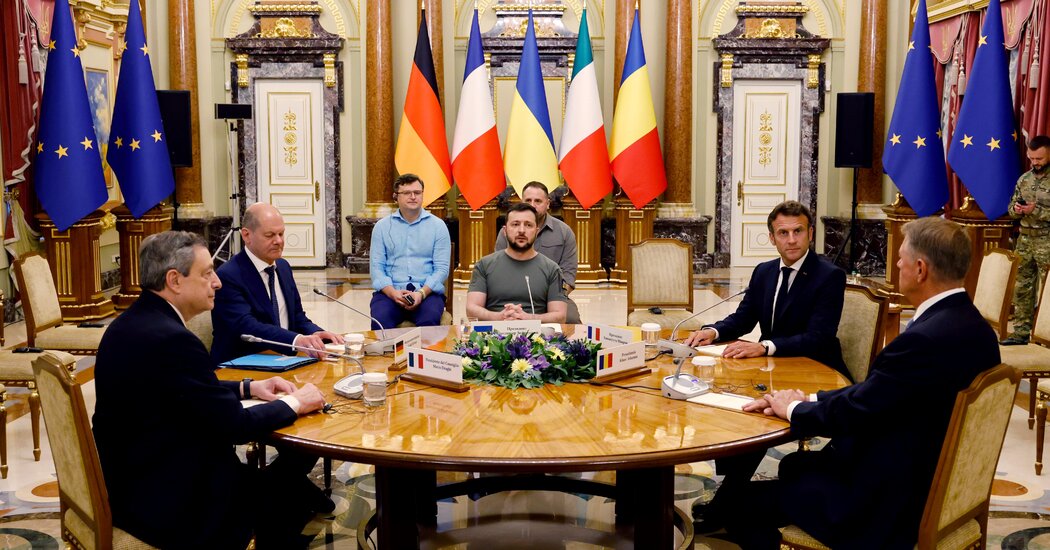 We’re covering European leaders’ vows to back the Ukrainian war effort and a Trumpian presidential candidate in Colombia.

The leaders of France, Italy, Germany and Romania met with President Volodymyr Zelensky of Ukraine on Thursday in Kyiv, where they expressed support for making Ukraine a candidate for E.U. membership and said they would continue to back Ukraine’s military efforts, despite suggestions to the contrary.

President Emmanuel Macron of France and Chancellor Olaf Scholz of Germany, who had been criticized in recent days over the perception that they were seeking to pressure Zelensky into peace talks with Russia, emphasized that their support was genuine: “We are and we will remain by your side in the long run to defend your sovereignty, your territorial integrity and your freedom,” Macron said. “This is our goal, we have no other and we will achieve it.”

The European leaders also visited Irpin, a Kyiv suburb where investigators are looking into reports of Russian atrocities during the war. Russia dismissed their trip as empty symbolism. Dmitri Medvedev, the former Russian president, derisively called the leaders “European connoisseurs of frogs, liverwurst and pasta.”

Hesitation: Ukrainian officials are wary of pressure to negotiate an end to the war with Russia because of the 2014 and 2015 Minsk accords, in which the Ukrainians offered concessions in exchange for Russian cease-fires, which never held.

Trapped: With all of the bridges connecting the twin Ukrainian cities of Lysychansk and Sievierodonetsk destroyed and fighting still raging, thousands of civilians have been left trapped inside one of the deadliest battles of the war so far.

Schoolchildren around the world have long been taught that Hong Kong was a British colony. But students in Hong Kong will soon be told a different lesson: It wasn’t.

A new narrative pushed by Beijing — which rejects how the British saw their relationship to the city — will be explicitly taught to Hong Kong high school students through at least four new textbooks that will be rolled out in the fall.

The textbook material is still under review by principals, teachers, scholars and employees of Hong Kong’s Education Bureau, but it seems destined for classrooms. Local news websites published draft excerpts this week, and The Times viewed teachers’ proof copies.

Excerpts from the textbooks reinforce China’s Communist Party’s position on Hong Kong. “The British aggression violated the principles of international law so its occupation of Hong Kong region should not have been recognized as lawful,” read the teachers’ edition proof copy of one textbook.

Quotable: The narrative, one pro-democracy activist said, “is a shorthand for saying, ‘Hong Kong was always a part of China, thus Hong Kongers never could claim a right of self-determination.’”

A Trumpian candidate emerges in Colombia

Rodolfo Hernández, a 77-year-old businessman and former mayor, has emerged as Colombia’s most disruptive presidential candidate in decades, electrifying voters — and a huge TikTok fan base — with a Trump-like “drain the swamp” message.

He’s one of two remaining candidates in Sunday’s election for president of the nation, the third largest in Latin America, with the winner taking control at a pivotal moment in the country’s history.

Hernández has promoted himself as a paragon of democracy, a successful businessman who makes good on promises and cares for the poor. But a Times reporter traveled to Bucaramanga, a mountain-fringed city where he built his empire and once served as mayor, and found a different picture: an anti-corruption candidate who has been indicted on corruption charges, an austerity proponent whose slash-and-burn policies led to a hunger strike by city employees and a construction magnate who once pledged to build 20,000 homes for the poor that never materialized.

The opponent: Hernández faces Gustavo Petro, a former rebel and longtime senator who is hoping to become Colombia’s first leftist president. Their electoral success — they are roughly tied in the polls — reflects an anti-establishment fervor that swept through Latin America as longstanding poverty and inequality intensified during the pandemic.

Diablo is one of the most successful video game franchises, from one of the biggest developers in the world, Blizzard Entertainment. But the latest entry in the series, “Diablo Immortal,” has received overwhelmingly negative reviews from critics who say the game’s payment model is predatory.

“Diablo Immortal” is free to download on computers and mobile devices, but it hosts a shop in which players can use real money to buy items to improve their avatar’s gear. Those improvements are not guaranteed; players are, in essence, paying for a virtual scratch-off ticket. By some estimates, it can take thousands, if not tens of thousands, of dollars to fully upgrade a character.

Belgium and the Netherlands will not get “Diablo Immortal” as a result of anti-gambling rules that ban these types of games. And on Metacritic, a review aggregator, users have given the PC version of the game a score of 0.2 out of 10 — among the lowest of any Blizzard game. — German Lopez