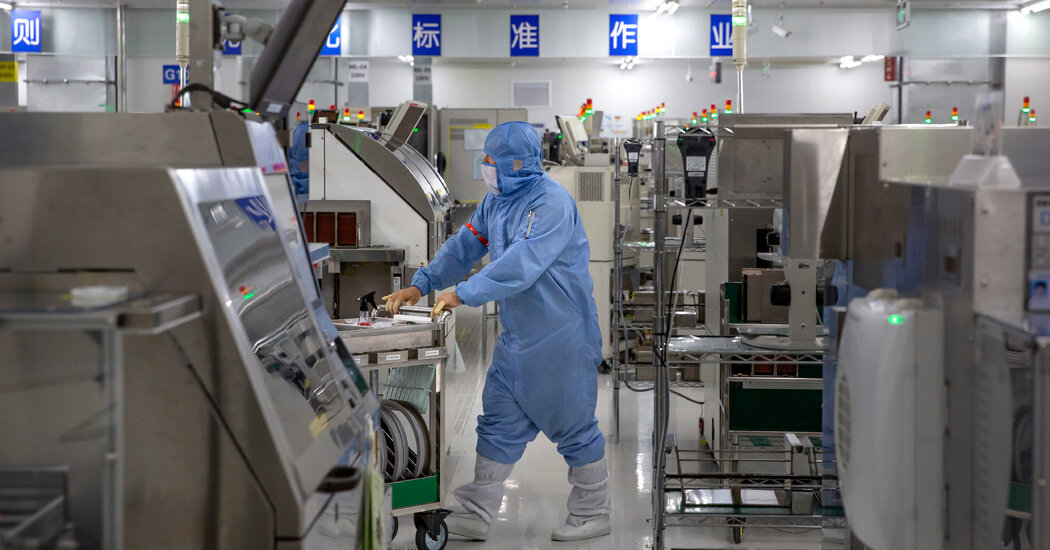 The legislation would provide billions of dollars in subsidies for domestic manufacturers of semiconductors and fund scientific research into artificial intelligence, robotics and quantum computing — areas in which the U.S. fears it is falling behind China. It passed the chamber in a 64 to 33 vote and is expected to pass in the House with some Republican support.

The bill’s margin of approval illustrated how commercial and military competition with Beijing — and the promise of thousands of new American jobs — has drastically shifted party orthodoxies, generating agreement among Republicans who had eschewed market interventions and Democrats who had resisted showering big companies with federal largess.

Context: The share of modern manufacturing capacity in the U.S. has plummeted to 12 percent, making the nation reliant on foreign countries amid a chip shortage that has sent shock waves through the global supply chain.

Hong Kong’s top officials are rushing to embrace Xi Jinping, China’s leader, a performance of devotion that is a jarring shift for Hong Kong’s once rambunctious political culture.

On his first full day in office, Hong Kong’s new leader, John Lee, shared a picture of himself alongside a printout of what he described as an important speech by Xi. The city’s lawmakers held a six-hour session this month lauding Xi’s recent visit to Hong Kong. And hundreds of top officials have attended group study sessions, including one titled “Spirit of the President’s Important Speech.”

Such displays of devotion — common in mainland China — represent a major change in the former British colony that was granted a high degree of autonomy when it was returned to Chinese control 25 years ago. Hong Kong has long had to abide by Beijing’s decisions over major issues, but the bureaucracy’s embrace of Xi has crystallized its new identity as a territory firmly in Beijing’s grip.

Context: The embrace of Xi is also a sign of the weakness of the local government. Lee, who spent nearly his entire career with the police and the security service, lacks the sort of broad network his predecessors brought to the job through lengthy experience in the civil service or in business.

Officials in the western Japanese city of Yamaguchi killed a monkey this week that they believe was responsible for a spate of attacks against humans.

Approximately 25,000 monkeys are killed each year in Japan, mostly by municipalities. Clashes between humans and macaques — also known as snow monkeys — are becoming more frequent. In Yamaguchi alone, 56 victims were attacked by a monkey this month, including a baby girl injured in her home and a 4-year-old girl pounced on at a kindergarten.

Japan’s macaque population is thriving, in large part because conservation efforts have been a tad too successful. The population recovery has “provoked and intensified” human-macaque conflicts to the point where people living near the animals now face serious risks of having their own habitats invaded, Hiroto Enari, a primate expert, wrote in a recent study.

The most serious concern, Enari said, is that the animals could spread hepatitis B or other diseases to humans.

Elsewhere in Asia: Human-monkey conflicts are not new to the region. In Thailand, the city of Lopburi has been under siege for years from aggressive crab-eating macaques. In Singapore, officials recently had to guard an apartment complex from invading monkeys.

Economic devastation looms across the Caribbean, which is facing a future of climate crisis and spiraling debt. In Barbados, Mia Mottley, the first woman to lead the country, has been working to restructure the country’s billions of dollars in debt in a way that would free up money to invest in its economy and protect against climate catastrophe.

The year of Barbie

The color of the season is pink. The inspiration: Barbie.

It started with the high-fashion world. During Paris Fashion Week, Valentino debuted a pink collection, and in Rome this month, Anne Hathaway attended his show in a hot-pink sequined dress. Lizzo, Lil Nas X, Kim Kardashian and other celebrities have also been spotted in pink.

The trend, dubbed “Barbiecore,” is also popular among Millennials and Gen Z. As the website Who What Wear put it: “Yes, the dolls you played with as a child are leading the sartorial charge right now. Talk about a true nostalgic revival.”

Then there’s the live-action Barbie movie that comes out next year, directed by Greta Gerwig and starring Margot Robbie as Barbie and Ryan Gosling as Ken. Photos of the actors rollerblading in extremely bright outfits have been hard to miss online: “the social media dopamine hit of summer,” as Vanessa Friedman, the fashion director and chief fashion critic for The Times, put it.

That’s it for today’s briefing. See you next time. — Matthew

The latest episode of “The Daily” is about the N.F.L. quarterback Deshaun Watson.

You can reach Matthew and the team at briefing@nytimes.com.