Your Tuesday Briefing: A Marcos Victory? 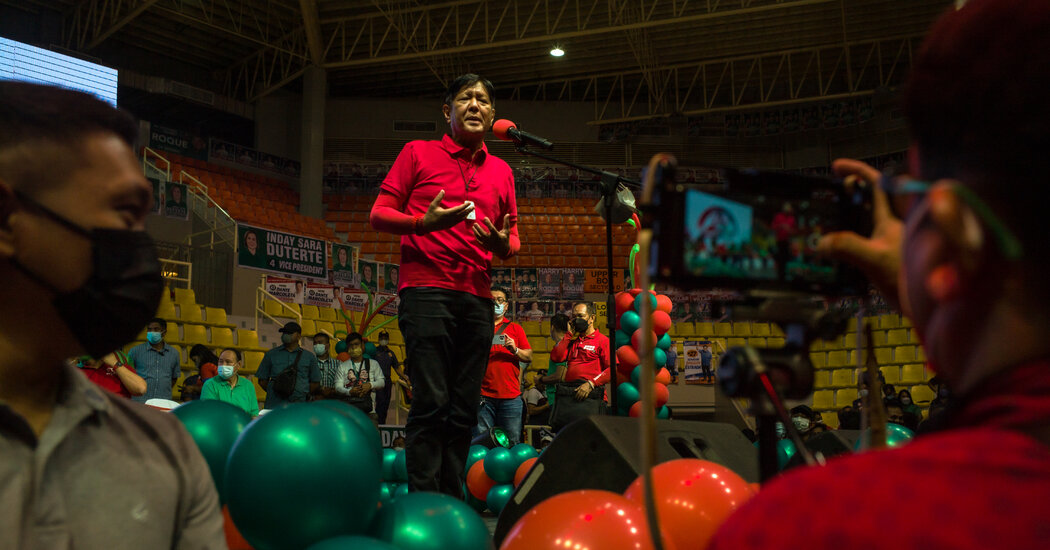 Your Tuesday Briefing: A Marcos Victory?

Another Marcos for president?

With more than 90 percent of election returns counted in a preliminary tally, Ferdinand Marcos Jr. appeared sure to win the country’s presidential election early Tuesday morning. He has a huge lead over Leni Robredo in the Philippines’ most consequential vote in recent history. Here are live updates.

Marcos, the son of the former dictator who was ousted 36 years ago, appealed to a public that has grown disillusioned with the country’s failure to address the basic needs of its citizens. Poverty is widespread, inequality has widened and corruption remains rampant. The country is vulnerable to climate change and struggling to recover from the pandemic.

His victory raised profound questions about the future of Southeast Asia’s oldest democracy. Marcos is likely lead to a further regression of democracy. The election may prove prophetic: Political falsehoods flourished on social media during the campaign and accounts of alarming voter irregularities have surfaced across the country.

Impunity: Rodrigo Duterte, the outgoing president, has destroyed or weakened key institutions over his six-year term, and his daughter Sara is Marcos’s running mate. Marcos has indicated that he would shield Duterte from an investigation of his violent drug war by the International Criminal Court.

Prime Minister Mahinda Rajapaksa stepped down, a blow to his embattled ruling family. His brother, Gotabaya, remains the country’s president.

The family, which has dominated Sri Lankan politics for nearly two decades, is accused of mismanaging an economy now in free fall. For months, Sri Lankans have engaged in largely peaceful demonstrations as food prices soared and families struggled with shortages of basic necessities including medicine, fuel and electricity.

Rajapaksa made the move hours after his supporters instigated fierce clashes with opponents in Colombo, the capital, a portentous turn in the protracted unrest that left dozens injured and prompted a nationwide curfew.

Credit: The government cut taxes while facing shrinking foreign reserves and struggling with mounting debt. Now, its usable foreign exchange reserves are below $50 million, and Sri Lanka has been relying on credit lines from allies like India for basic necessities.

Agriculture: The Rajapaksa family also introduced a contentious ban on chemical fertilizers in a push for organic farming, which backfired and left a deep impact on food security.

As Beijing doubles down on its efforts to stamp out the coronavirus, Taiwan’s government announced that it would be shifting from elimination to “coexisting with the virus” while “reducing disasters.”

Despite soaring case counts, Taiwan is now allowing people with mild and asymptomatic infections to isolate at home instead of in hospitals. The government also slashed the number of days in quarantine it would require of incoming travelers and people deemed their close contacts.

The shift reflects an acceptance of evidence that the highly transmissible Omicron variant is less deadly than previous ones: More than 99.7 percent of the new infections so far have been mild or asymptomatic.

It also offers Taiwan a messaging opportunity. Unlike China, leaders say, the island can balance public health with the rights of the individual and the functioning of society.

Economy: A strict Covid strategy allowed Taiwan to be a rare safe haven for international concerts and conferences. As much of the world relaxes restrictions, Taiwan would risk sacrificing tourism and investment by continuing to stay closed.

China: Schools in Beijing will stay closed. And Shanghai, once a symbol of China’s glamour, is a casualty of authoritarian excess, our New New World columnist writes.

State of the War

As part of an effort to “sonify” the cosmos, researchers have converted the sound of pressure waves from a black hole, a B flat 57 octaves below middle C, into an audible … something. Check it out here.

World Through a Lens: Noa Avishag Schnall spent three weeks on Oman’s coast, traveling to the Strait of Hormuz. Her photographs are beautiful, and she writes about the strangeness of solo travel with grace and humor.

Still life paintings had a bum reputation for centuries. Their scale is usually smaller. Their prices are lower. They’re art-class intros. Even a great still life specialist like the Dutch painter Willem Claesz Heda brought with him all that lavish detail to show you … what? That a ham once sat on a platter?

On the contrary. Still life is one of the most philosophical of painterly modes. It asks: Can something be real and an illusion? What gives things value? Is the world just a bunch of random stuff?

The things in Heda’s 1635 banquet piece “Still Life With a Gilt Cup” are vectors from four corners of the world that have crashed onto the shore of the breakfast table: exotic lemons, expensive peppercorns, Venetian glass and imported silver.

“This table might as well be a transit hub, for how many global routes intersect here,” Jason Farago writes in our latest Close Read.

Its objects are, in fact, commodities, and they tell a story of money and power.

Capital, not the church, powered the art market in the Netherlands — especially that of the Dutch East India Company, the most valuable company of all time. In turn, the social and economic life of things became visible in it. — Whet Moser