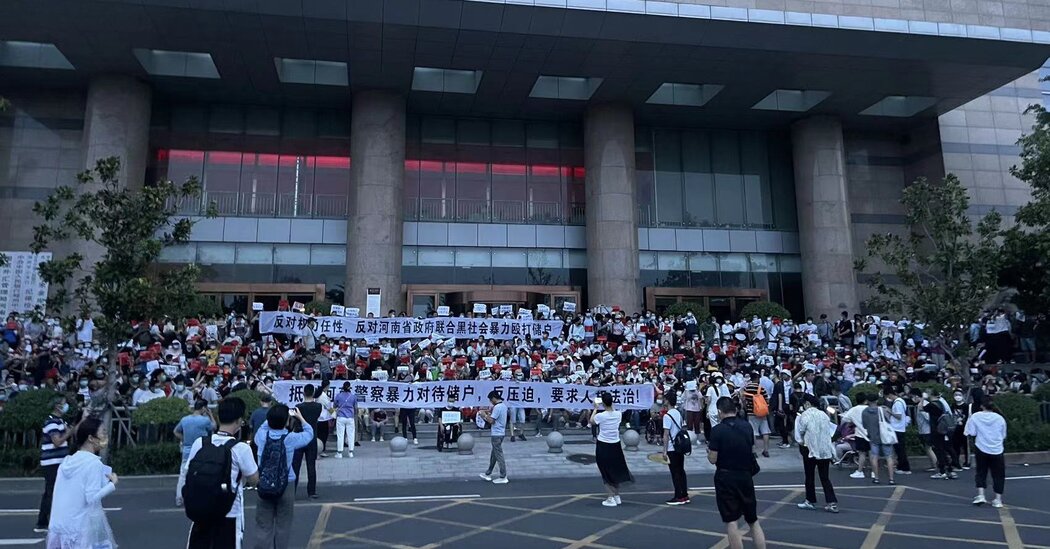 Good morning. We’re covering economic protests in central China, the toll of Russia’s invasion on Ukraine’s civilians and new scrutiny into the death of Shinzo Abe.

Security forces attacked as many as a thousand protesters who were trying to withdraw their money from four rural banks in Henan Province this weekend.

The rare mass demonstration is the latest escalation in a growing financial scandal in central China. Depositors have tried for months to withdraw cash from the four banks. In April, they found their funds frozen as investigators examined allegations of widespread fraud.

The depositors began showing up in person to demand their money. The authorities in the city of Zhengzhou tried to use health code apps meant to prevent the spread of Covid-19 to stop them from traveling, but retreated after facing backlash.

One 31-year-old woman who is two months pregnant said she had deposited all of her savings and her father’s pension money. “If I don’t get the money back, I can’t have prenatal checks, I can’t have this child and I can’t continue to support my 2-year-old daughter,” she said.

Details: This weekend, guards beat the protesters and shoved them onto buses. Demonstrators told The Times that dozens had been sent to hospitals.

Russia has long claimed that it does not intentionally target civilians, despite repeated strikes. Since late February, when Moscow invaded Ukraine, the Kremlin has trotted out excuse after excuse.

But in Donetsk Province this weekend, shelling and missile barrages increased and Russia fired incendiary munitions into the eastern city of Bakhmut, leading to house fires. Ukrainian civilians are bearing the brunt of Russia’s renewed focus on the eastern Donbas region — despite what military analysts say is a lull in its drive to seize territory.

At least eight people were killed in 24 hours, and missiles struck at least 10 urban centers in Donetsk. The death toll from an apartment complex hit by Russian missiles rose to 30 yesterday.tw

“Only civilian structures — a shopping center and houses of peaceful Kharkiv residents — came under the fire of the Russians,” a local official said.

Interview: Yulia Paievska, a celebrated medic from Mariupol, was captured when the city fell. She described months of traumatic captivity in a Russian prison.

When Tetsuya Yamagami was arrested after the assassination of former Prime Minister Shinzo Abe of Japan, he told the police he had “a grudge” against a “certain group.” But the authorities have not identified the organization nor explained its connection to Abe.

Amid a swirl of Japanese media speculation, scrutiny is now focused on the Unification Church, the Christian group founded by the Rev. Sun Myung Moon and known for its mass weddings.

Yamagami’s mother is a longtime member of the Unification Church, church officials said, though they did not specifically identify the church as the group cited by the police. The church also said it had no direct relationship with Abe.

The church is known for cultivating relationships with conservative political parties worldwide, but a sociologist at Hokkaido University who has studied it said that its ties to Abe were probably “very weak.”

Background: The church has found common ground with right-wing Japanese politicians, including Abe’s grandfather Nobusuke Kishi, over a shared animosity for Communism.

Tin Chin and Mo Lin met at a homeless shelter in New York City. The two men — one born in China, one born in Hong Kong — quickly became best friends.

But Chin had a dark secret. And when Lin was beaten at the homeless shelter, Chin returned to his past life to help his friend and — just maybe — find redemption.

Over the past 60 years, the Ivory Coast has lost around 85 percent of its forest cover. Now, the authorities are trying to protect what remains and reforest as much as they can.

They have focused on one lush strip of greenery, Banco National Park, which sits right in the center of Abidjan. The park, one of the world’s last primary rainforests to survive within a major metropolis, serves as a carbon pit and flood regulator. Conservationists say it is vital to the thrumming capital: Banco’s groundwater table provides 40 percent of its drinking water.

But unregulated urban expansion has steadily polluted its pristine environment. The country’s biggest junkyard is in the middle of the forest. Landfills contaminate its springs. Poachers endanger its wildlife.

As part of the country’s nascent ecotourism plan, the government charges admission to the park, and a wall is being built around it to make the park more appealing as a hiking and biking oasis. But efforts to protect Banco have pitted conservationists against residents and the informal workers operating in the protected area. They recognize the need for protection but feel like collateral damage.

“We’re asked to protect the forest and leave, but without receiving land to settle in,” a mechanic said. “So where do we go?”

P.S. Francis X. Clines, an esteemed Times journalist, died Sunday at 84. He covered New York City politics, the collapse of the Soviet Union, the Troubles in Northern Ireland and everything in between. He will be sorely missed.

The latest episode of “The Daily” is on abortion laws.